Six years ago, a deeply disturbing story emerged from a poor neighorhood in Philadelphia. In a horrific 261-page report, prosecutors accused abortionist Dr. Kermit Gosnell of delivering seven babies alive and then killing them by snipping their spines with scissors. He also allowed a woman who had survived 20 years as a refugee in Nepal to be incompetently overmedicated. She died at his clinic. 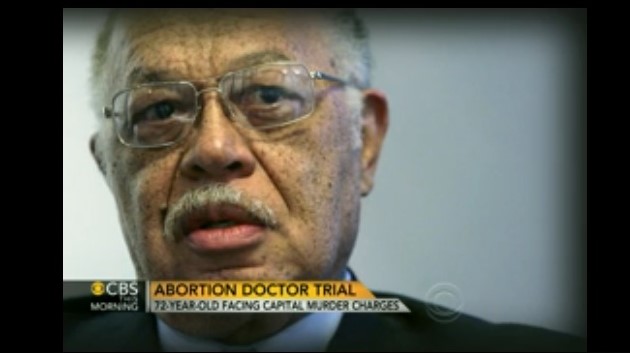 Documentary filmmakers Phelim McAleer and Ann McElhinney have written a new book titled Gosnell: The Untold Story of America’s Most Prolific Serial Killer. Journalists will sneer, since they somehow suggest abortion is a “choice,” not murder.

This monster chose to kill. He is the face of the abortionist. His story peels back the onion on this ghastly practice.

Back in 2011, the Philadelphia Inquirer published the story on Gosnell’s workplace and it was chilling: "Semiconscious, moaning women sat in dirty recliners and on bloodstained blankets. The air reeked of urine from the flea-infested cats permitted to roam the clinic. There was blood on the floor and cat feces on the stairs."

How could this happen? The national media were barely curious. CBS Evening News offered one story, NBC's Today managed 50 vague words and ABC was AWOL. Rachel Maddow anchored an entire hour-long special on the shooting death of Kansas abortionist George Tiller, but a Nexis search at that time found not she, nor anyone else on MSNBC could locate the name Kermit Gosnell.

This wasn’t the first national news outbreak. NPR -- give credit where it's due -- first offered national media coverage on Gosnell on March 30, 2010, when his medical license was revoked. Marie Smith told her story of her abortion at Gosnell's clinic at age 19, followed by a week of fever and vomiting. During a hospital visit, X-rays revealed parts of Smith’s baby were still lodged in her uterus.

When Dr. Gosnell went to trial in 2013, again the national media couldn’t be budged to cover the outrage. Any other mass murder would be SRO. Not here. The press box had empty chairs. When the Associated Press managed a story, reporter Maryclaire Dale described the killer winsomely: “Gosnell, an elegant man who appears serene in court, smiled softly as he listened to testimony last week, even that of a young woman who said she was hospitalized for two weeks after a 2009 abortion.”

NBC Nightly News was the first network evening news show to discover the trial, but it took a guilty verdict after 56 days to force all three network evening news shows to report the story, for less than two minutes each. CBS anchor Scott Pelley announced, “In Philadelphia, today, there was a verdict in a murder trial that got national attention. A doctor who ran an abortion clinic was convicted of murdering three babies who had been born alive.” Over and done.

The networks spent years turning their “national attention” everywhere else.  In the last two years, the Big Three networks devoted more than 75 minutes to the rape allegations against Bill Cosby. He killed no one.

As the authors note, this same attention deficit repeated itself when the Center for Medical Progress revealed that Planned Parenthood clinics were trafficking in dead baby parts. It continued when House Republicans created a Select Panel on Infant Lives to investigate further. Its findings were issued several times in 2016. Take, for just one example, the story out of the University of New Mexico, where they not only procured body parts from a nearby abortion clinic, they dissected the baby brains at....summer camps.  Network coverage? Zilch.

These nightmarish abortion stories underline just how hollow the media sound when they proclaim in the age of Trump how boldly they will act as fierce, truth-telling watchdogs. When the ugly truth collides with their leftist ideology, truth gets snipped in the neck.