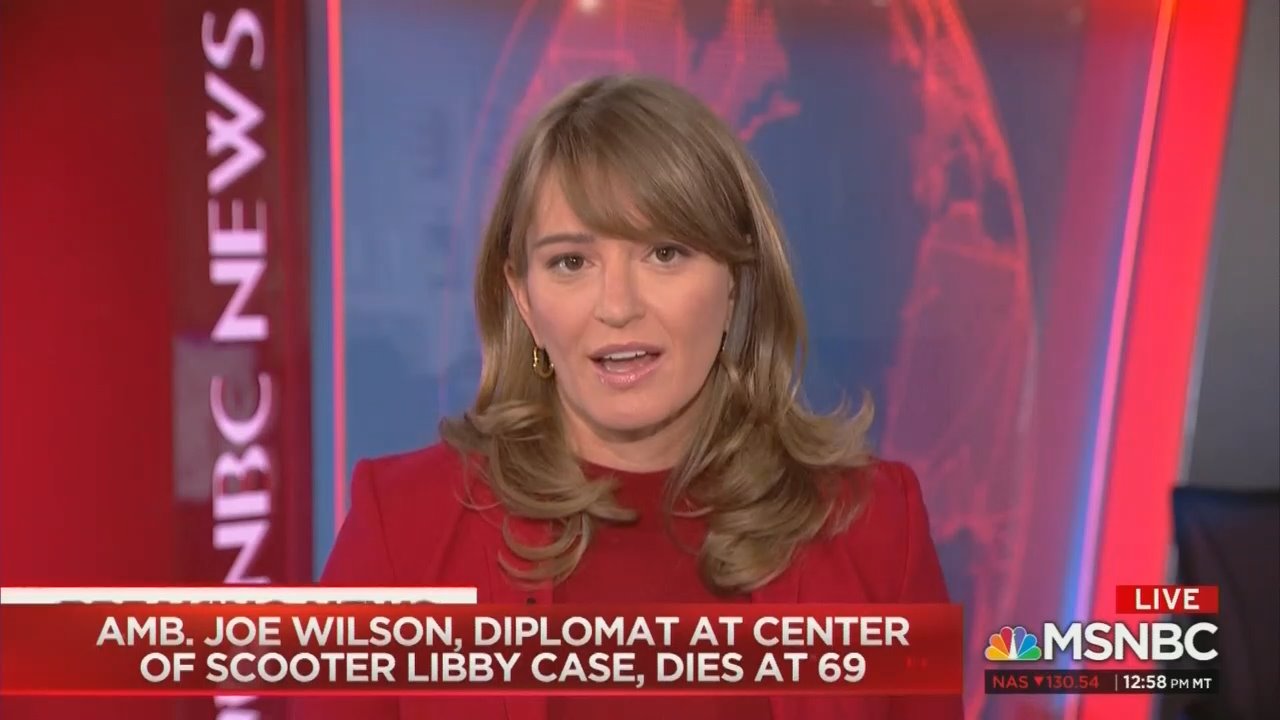 Late last week, after word came that the former ambassador to Iraq, Joe Wilson, had passed away, MSNBC repeated some of the misinformation that journalists and other liberals pushed during the George W. Bush era as anchors Joy Reid and Katy Tur lauded Wilson for disputing President Bush's claims that Saddam Hussein had tried to acquire uranium in Africa before the invasion of Iraq.

On Friday, Tur claimed that the leaking of Wilson's wife, Valerie Plame's, identity as a CIA analyst was an act of "political retaliation" by the Bush administration when the investigation into the matter did not conclude that the leaking was deliberate.

And, on Saturday, Reid called Wilson an "American patriot" for calling out President Bush for using a "lie" and "false information" to justify the invasion.

On Friday afternoon, at the end of hosting her block of MSNBC Live, Tur announced:

We end the show today with some sad news. Ambassador Joe Wilson has died. A career diplomat, Wilson called out the second Bush administration over the war in Iraq. In a 2003 op-ed, Wilson openly questioned the Bush White House's information, saying it manipulated intelligence related to Iraq's nuclear weapons program to justify an invasion.

Wilson called writing that op-ed his "patriotic duty." That disagreement led to the public unmasking of Wilson's then-wife, Valerie Plame, as a CIA agent, an act of political retaliation  Ambassador Wilson was a familiar face on this network in recent years. He was 69 years old.

But there was no conclusion that the leak was deliberate. After the investigation ended, Assistant Secretary of State Richard Armitage admitted to being the original leaker which led journalists to ask other administration members if Plame worked for the CIA.

It was argued at the time that, because word had gotten out and some journalists already knew she worked for the CIA, other administration members may not have realized they were doing anything wrong as they inadvertently gave corroboration when jouranlists asked them about her since some CIA employees do not have a covert status while others do.

Armitage -- who was skeptical of invading Iraq to begin with and therefore not a person one would expect to instigate a partisan hit job against opponents of the war -- gave a plausible explanation that he mistakenly believed that Plame did not have a covert identity because he had seen her name included in reports from the CIA, which he argued was unusual for a covert agent.

The topic of her employment at the CIA came up because conservative columnist Robert Novak was trying to find out from Armitage why Wilson was sent to Africa by the CIA to investigate Niger's uranium trade when he was himself not a CIA employee, leading Armitage to divulge the relevant information that he had been reportedly recommended by his wife.

The unproven theory that the leak was a deliberate act of "political retaliation" was part of the narrative that was pushed by liberal journalists throughout the investigation and treated as if it were a fact.

Returning to last week, on her AM Joy show on Saturday, host Reid began the segment by playing the relevant soundbite of then-President Bush from the 2003 State of the Union speech: "The British government has learned that Saddam Hussein recently sought significant quantities of uranium from Africa."

Those famous 16 words by George W. Bush were proven to be a lie perpetrated on the American people to sell a war. The man, an America patriot who revealed the truth, was Ambassador Joe Wilson. Six months after Bush said those words, Ambassador Wilson wrote an op-ed titled, "What I Didn't Find in Africa," that set off a chain reaction that exposed President Bush and Vice President Cheney's use of false information to sell us a war in Iraq.

Reid continued: "A week after Mr. Wilson's op-ed was published, his wife, Valerie Plame, was outed as a covert CIA agent. The investigation into the leak led to the conviction of Dick Cheney's chief of staff for lying to the FBI."

She soon added: "His legacy should stand as an inspiration to those who dare to speak truth to power."

It is also noteworthy that, even though Wilson claimed that his findings in Niger contradicted President Bush's claims about Saddam Hussein seeking uranium, British foreign secretary Jack Straw argued that Wilson's report, in fact, corroborated Britain's claims that Saddam Hussein had tried to acquire uranium in Africa.