On Tuesday's The Beat show on MSNBC, host Ari Melber gave an eight-minute commentary complaining about Republican opposition to new gun control laws as the MSNBC host also repeated the discredited myth that Charleston mass murderer Dylann Roof was already a convicted felon who could have been barred from purchasing his gun if not for a "loophole" that allowed him to purchase it after the background check took too long to complete.

But the Washington Post's Eugene Volokh and right-leaning crime researcher John Lott have both pointed out that Roof had been arrested for misdemeanor -- not felony -- drug possession which did not make it illegal for him to buy a gun. A clerical error apparently led to previous incorrect claims that he had been arrested for a felony charge.

At 6:27 p.m. Eastern, Melber touted the "potential breakthrough on gun safety" of the Democratic-controlled House passing new gun control measures that would extend the time allowed for background checks to be completed, and, although he did not clarify it, would also require background checks to be performed before private gun sales by individuals who are not licensed gun dealers.

Before showing a clip of South Carolina Democratic Congressman Jim Clyburn speaking on the matter, Melber claimed that the bill would be "closing the loophole related to that infamous mass murder at a black church in Charleston" -- a claim which the MSNBC host repeated several times during his commentary. He soon reiterated:

The ritual processing of another shooting turned to the gathering of the stark facts at that time about how easy it can be to pull one off, and Americans soon learned how Dylann Roof -- a convicted felon -- got his gun in the first place. The answer is as illogical as it is maddening. Roof's background check would have barred that gun store from selling him one. 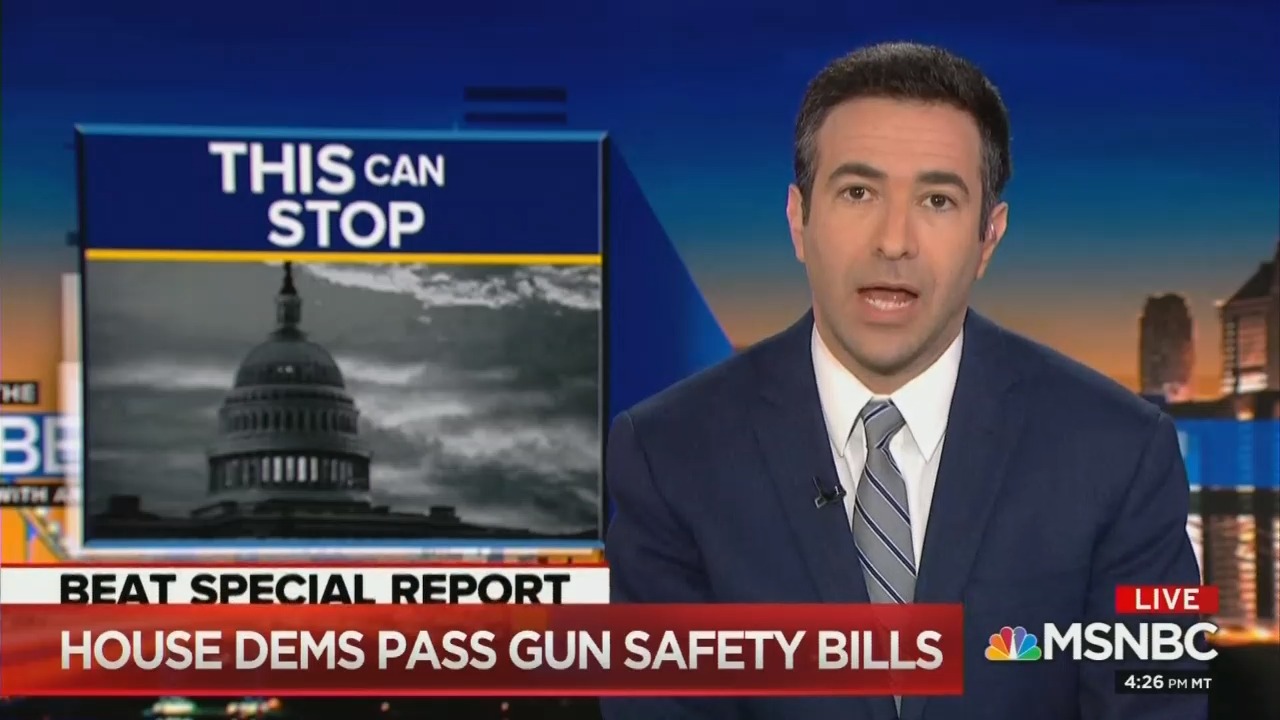 But, under a very lax loophole, when the FBI results do not come back within three business days on the background check, felons who could not buy guns under law are automatically cleared to buy a gun. In other words, even though Congress already agreed on barring felons from buying those guns, they can still buy them if there's a delay in their background check. Now, that's what Roof did when his background check didn't arrive in time -- a gun he used to murder nine innocent people

In addition to wrongly claiming that Roof already had a felony conviction that could have blocked his gun purchase, it was also not mentioned that Roof's mother took the gun from him, but he stole it back, which suggests he likely would have stolen one of his family's other guns to commit his crime even if he had been barred from buying from a gun dealer.

The segment concluded with clips of several Republican Senators who expressed condolences after the Charleston massacre followed by clips of their votes against gun control being made on the Senate floor in the past, suggesting that such votes contradict their condolences.