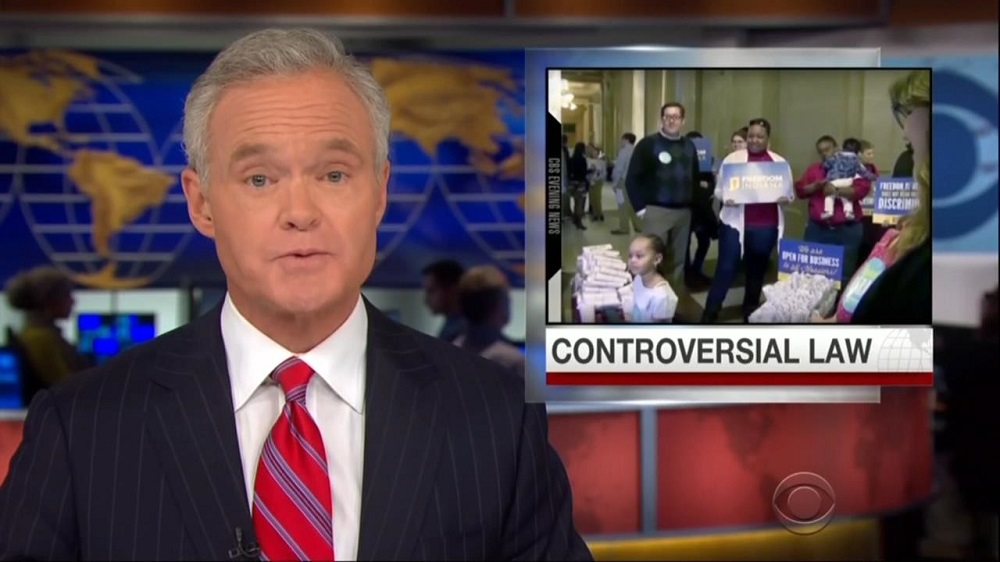 Friday's CBS Evening News played up the "growing backlash" by social liberals against a new law in Indiana that protest the religious liberties of business owners. Correspondent Adriana Diaz spotlighted how "the protests have grown from Indiana's state house to a torrent on social media." She also played clips or read excerpts from statements of four opponents of the law, while only featuring two from supporters. [video below]

Anchor Scott Pelley introduced the segment with the "growing backlash" term, and outlined that "supporters of the law say it protects religious freedom. Opponents say it legalizes discrimination." Diaz led with a clip of Governor Mike Pence defending the Indiana Religious Freedom Restoration Act, but quickly followed with the reaction from his ideological opponents:

ADRIANA DIAZ (voice-over): Governor Mike Pence signed the religious freedom bill that protects individuals and businesses from government interference when following their religious beliefs. But homosexuals like Angie Alexander and her wife, Cynthia, believe it's an invitation to discriminate by refusing service.

UNIDENTIFIED WOMAN 1: You know, we don't know what restaurants or what stores we can go into and – you know, not be turned away and have to suffer – you know? That's degrading. It's embarrassing.

DIAZ: The protests have grown from Indiana's state house to a torrent on social media. Apple CEO Tim Cook Tweeted, 'Apple is open for everyone. We are deeply disappointed in Indiana's new law.' Ahead of the Final Four in Indianapolis next week, the NCAA stated – quote, 'We are especially concerned about how this legislation could affect our student-athletes and employees.' 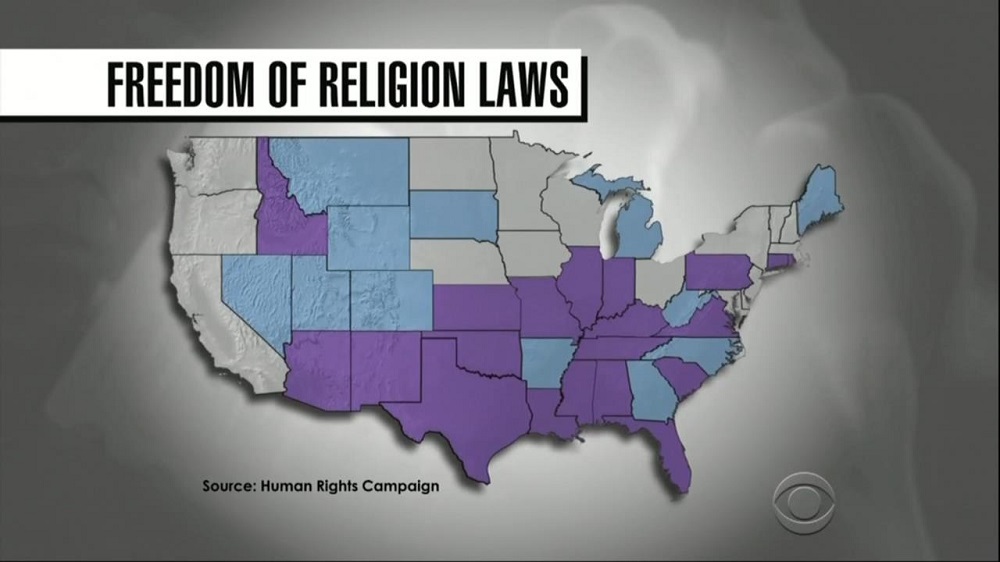 The CBS journalist continued by noting that "Indiana joins 19 other states with freedom of religion laws. A dozen more have introduced similar bills." An on-screen graphic detailed which states had passed these laws. However, it should be pointed out that the network's source was the far-left Human Rights Campaign, which is among the organizations opposing such legislation (see graphic at right).

Diaz then played a clip from an interview of one of the co-authors of the Indiana law, as well as from another opponent. However, she concluded her report by again touting the protests against the legal protection:

DIAZ (off-camera, from pre-recorded interview): Those who oppose this bill say it's legalizing discrimination. What do you say to that?

DIAZ (voice-over): Hundreds of business in Indiana are making public stands. Heather Givens has a sticker that says, 'This business serves everyone,' on display.

HEATHER GIVENS: My job is to love and inspire – like I said, everyone who comes through my door, and not to tell you who you need to be.

DIAZ (on-camera): Companies like Eli Lilly, salesforce.com, and the Indiana Chamber of Commerce have voiced concern over the law, Scott. Opponents to the law are planning a rally tomorrow at Indiana's state house, where thousands are expected.

DAVID MUIR: And now to Indiana and the new law sparking protests tonight – concerned businesses may now cite religious beliefs as a reason to refuse service to gay customers – the governor saying the law allows for more religious freedom. Apple CEO Tim Cook, who came out last year, saying he's deeply disappointed in the law. The NCAA, concerned about next week's Final Four in Indianapolis, expressing reservations about how the law will affect student athletes. Supporters tonight saying worries about discrimination are simply overblown.