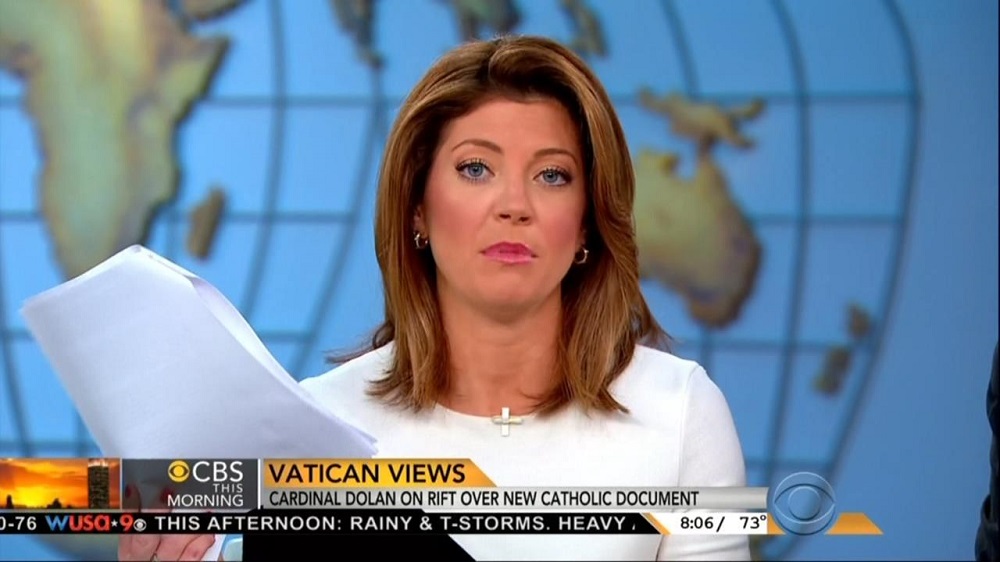 The CBS This Morning anchors stayed true to their reputation of playing softball with liberal guests, while badgering conservative/traditional ones with their Wednesday interview of Cardinal Timothy Dolan. Norah O'Donnell raised the much-hyped midterm report from the bishops' synod underway at the Vatican, and wondered, "How groundbreaking is it for the Catholic Church to raise even that question about whether the Catholic Church should welcome gay people?" [MP3 audio available here; video below]

When Cardinal Dolan asserted that homosexuals are welcome in the Catholic Church, O'Donnell shot back, "So, then why has...Cardinal [Raymond] Burke said that this entire document...[is] confused; it's erroneous, and that whole thing should be scrapped?" By contrast, the anchor, along with colleagues Charlie Rose and Gayle King, gave LGBT activist/actor Laverne Cox the kid glove treatment during a July 2014 interview on the morning show.

Rose led into the segment by touting how "a meeting of Roman Catholic leaders faces an open revolt." He continued by heralding the interim report as a "landmark Vatican document," and underlined that "conservative bishops" find it "unacceptable." He first asked the Catholic archbishop of New York, "This is an important time in the Church...is this an example of Pope Francis trying to take the Church in new directions – open it up – without changing or assaulting doctrine?"

Cardinal Dolan answered, in part, that "Pope Francis says the challenge that...any pope would have – namely, how to be true to the timeless, unchanging teaching of the Church – but yet, trying to put find creative, fresh, invigorating ways to present it. Pope Francis has captured the imagination of the world in trying to do that, and this would be a good example." Rose followed up by wondering, "How deep is the division over what he is trying to do?"

The guest replied that there is "remarkable unanimity and enthusiastic backing of the Holy Father's attempt to present the teaching of the Church in a fresh, exciting, enchanting, new way....There might be some good, deep discussion – you bet there is – on the way that's being expressed."

O'Donnell, along with fill-in anchor Jane Pauley, hounded Cardinal Dolan for the remainder of the interview:

NORAH O'DONNELL: Cardinal, this report, which was written by a committee handpicked by Pope Francis – I've read through it. It's 11 pages. And I want to go specifically to the parts that have become so controversial. There is a section that says 'welcoming homosexual persons,' and it says this: 'Homosexuals have gifts and qualities to offer the Christian community. Are we capable of welcoming these people, guaranteeing to them a fraternal space in our communities.' How groundbreaking is it for the Catholic Church to raise even that question about whether the Catholic Church should welcome gay people into their communities?

DOLAN: Look, you're talking to the archbishop of New York. I find it news that some people would consider this news. Norah, you know yourself – you're as familiar with beautiful parishes and communities in the Archdiocese of New York at home – who are already doing this – who are already saying, come on in. You're welcome here. This is a community of people who are trying our best to respond to the teaching of Jesus Christ; open ourselves up to his grace, so that we can live his message fully; and to seek his mercy when we can't. It's a tribute to Pope Francis that he's affirming this positive embrace of the Church, and calling us to make it even more dynamic.

O'DONELL: So, then why has your friend and colleague, Cardinal [Raymond] Burke, said that this entire document – which raises that question about gay people should be welcomed in the Church – he said it's confused; it's erroneous, and that whole thing should be scrapped?

DOLAN: (laughs) Well, I think he's right. He's picked up on a sign that a lot of bishops – and I would include myself – feel that it needs some major reworking. But I can assure you that – that Cardinal Burke would be part of that enthusiastic unity, in thinking anything we can do to welcome people into the Church – anything we can to do to invite them to hear again – to hear the saving invitation and conversion of heart that comes from Jesus Christ – let's do it. So, he's for that.

He's got a good point – and he's speaking for a good number of people in saying, boy, this document is a rough draft – does it ever need major revision – and that's what we're doing. That's the purpose of the synod. You always take that initial document and rework it. We've been – we've been laboring hard over the last two days, Norah, to do that. And so, thanks for paying attention to that first draft. I hope you give as careful a consideration to the ultimate relatio that comes out in a matter of days.

JANE PAULEY: But this does seem to go rather significantly further than what a layperson might describe as mere freshening.

DOLAN: One of the major obstacles we got today is the caricature – the stereotype that's out there – of constantly being no, no, no, no, no – constantly telling God's people what they can't do. They've heard me say often – we've heard Popes John Paul II; Benedict XVI, and now, in an extraordinarily effective way, Pope Francis – saying the Church isn't about no's. The Church is about a big, resounding yes to everything that is good and noble and beautiful and dignified and genuine and liberating in the human person. That's the message we're trying to get across – that the Church isn't some nag – some scold that's always saying no to the beauty, the truth, and the goodness of the human project. We're there to emphasize it; to strengthen it; to affirm it.

ROSE: Cardinal Dolan, we'll wait for the final draft. We thank you for joining us this morning, and we'll see you back in New York.

This is the first time that CBS This Morning has tossed hardballs at the Catholic cleric. Back on March 14, 2013, the very week that Pope Francis was elected, Rose pressed Cardinal Dolan on the issue of the ordination of women: "How do you respond to the fact that this really is the century of women?"