Sean Hannity confronted Anjem Choudary on his Fox News Channel program on Wednesday over the Islamist's unapologetic support of ISIS. The two repeatedly talked over each other, with the American talk show host hounding Choudary if he supported the terrorist group's genocidal campaign in Iraq and Syria.

The U.K.-based radical Muslim contended that the multiple account of atrocities by ISIS forces, especially against Christians and Yazidis in northern Iraq, were lies that were being used to discredit the Islamist group: [video below the jump]

SEAN HANNITY: ...We have video of children that have been beheaded, like this photojournalist [James Foley]; women and children with their heads placed on a stick after they've been beheaded; and we have one report after another of people who have been killed, chased out of their homes. They're in the Sinjar Mountains. The world is  dropping food to support them, and to protect them from radical friends of yours that you obviously support. And I'm just asking, do you support the concept of an Islamic caliphate of either convert or die? Do you support that? It's a simple question. Why don't you just tell the truth of what you believe? 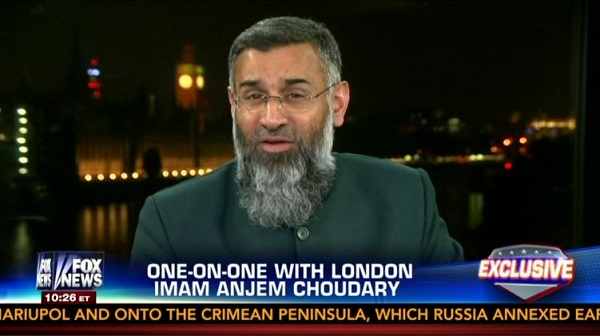 ANJEM CHOUDARY, LONDON IMAM: What you're talking about...is complete falsehood. First of all, the Yazidis – whoever went to the mountain – went to the mountain even before the Islamic State came to the area. First of all, they said there were 40,000; then, they said there were 20,000. Then, they went down – eventually, they said, well, a couple hundred and they were living in the mountains anyway in villages. So, this was a complete pack of lies in order to demonize and vilify the Islamic State. And, by the way, there's nothing called ISIS anymore. There's a calipha. Secondly, the Christians are actually queuing up to come back into Mosul because they realized that life under the Sharia is much better than the Nouri al-Maliki regime, which the Americans propped up, and who was murdering and torturing the people in the region.

Hannity led the ten-plus minute segment with Choudary with his question on whether his guest supported ISIS's "convert or die" campaign in northern Iraq. Instead of answering the question, the outspoken radical Muslim played up the carnage during the Iraq War as justification for the Islamist group's retaliation against the West and other groups:

CHOUDARY: Well, there's two questions here: one about what the Islamic State actually asking the non-Muslims to do; and how this particular incident began. In fact, I seem to remember people were shocked and awed over ten years ago, when the Americans carpet-bombed Assyria and killed hundreds of thousands of people. I remember we have Abu Ghraib-

HANNITY: I asked you a simple question: do you support – hang on a sec-

HANNITY: Do you support convert to Islam or die?

CHOUDARY: I'll answer the way I want to answer it-

CHOUDARY: I'll answer the way I want to answer it. The fact is – well, I'm answering it – allow me to. The fact is that this has a precursor. Every cause has an effect. If the Americans bomb and murder hundreds of thousands of people and they torture people – and they continue to do so in Guantanamo Bay – obviously, this will have repercussions. I think it was your old master, George Bush, who said, either you're with us or with the terrorists. And, you know, we're not with America definitely – at least, so we must be with the terrorists. I think that you've basically isolated most of the world-

HANNITY: So you're with the terrorists.

When the Fox News host continued to press the question about ISIS threatening the religious minority groups with "convert or die," Choudary retorted with his claims that the accounts of the group's atrocities were "false."

Later in the segment, Hannity pressed his guest about Sharia law's treatment of women:

CHOUDARY: Well, I'll tell you something: we don't exploit women with pornography, in the fashion-

HANNITY: What would the punishment be?

CHOUDARY: Well, let me answer the question. We don't exploit them through pornography; the fashion and cosmetics industry. Women are not slabs of meat in Islam. They are honored. They are our mothers, our sisters, our daughters – and both the women-

HANNITY: Okay. I got it. And if a woman doesn't want to wear a burqa or a covering, what would the punishment be?

CHOUDARY: Wait a second! Let me answer the question. You're not interested in the truth. You're interested in your own voice. Allow me to answer-

CHOUDARY: Women – both Muslim and non-Muslim women will cover themselves. They don't walk around naked like your own mothers and sisters-

HANNITY: Right. So – and if they don't cover themselves, what would the punishment be?

Near the end of their sparring match, Hannity blasted his guest's support of radical Islamism, while Choudary promised that Sharia law would be implemented "in the whole world one day," in accordance with Islamic prophecy.