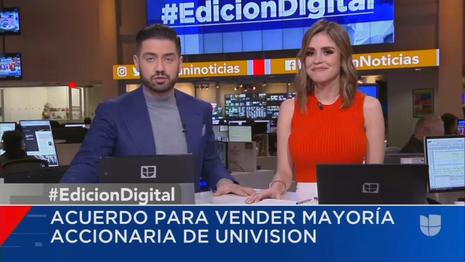 Four years ago, Univision asked for (and received) a rule waiver from the Federal Communications Commission (FCC), allowing Televisa to expand its stake in the network beyond the 25% limit established by law. Shortly after announcing its proposed sale to a new investor group, Univision quietly asked the FCC to change its rules yet again, this time in order to allow 100% foreign ownership.

In a letter to the FCC, Media Research Center Founder and President L. Bozell III lays out the case against approval of what amounts to a foreign bailout of Univision. The proposed rule change is currently under national security review by the Departments of Justice, Defense, and Homeland Security.

Below is the full text of the letter:

Univision’s Petition for Declaratory Ruling now before this Commission seeks approval for an additional waiver of the foreign ownership rule, which would allow foreign interests to acquire up to 100% of the Nation’s largest and highest-rated Spanish-language media network. I write to you today, in opposition to this rule change.

Prior to obtaining its 2017 Declaratory Ruling (MB Docket No. 16-217) Univision’s news division engaged in conduct which is, unequivocally, politically-motivated activism under the guise of journalism. To wit: in 2016, the network engaged in coordinated activities with the presidential campaign of Hillary Clinton, beginning a scant five days after the Clinton candidacy was announced. Univision Executive Chairman Haim Saban directed then-President of News Isaac Lee to meet with Clinton campaign chair John Podesta, and it would later be revealed that the purpose of that meeting was to discuss “ideas for Univision/Fusion and Hillary.” These discussions would encompass everything from how best to project Clinton on social media and on Univision’s English-language affiliate Fusion, to which reporters were best suited to interview Clinton. One such email recounts a conversation between Saban and Clinton about the campaign “not doing enough with Univision”. Univision News also suppressed news of the various financial improprieties surrounding the Clinton Foundation, of Saban’s ties to the Clinton Foundation, and of Saban’s financial donations to both the Clinton campaign and supporting SuperPACs. Univision’s viewers never received disclosure of the extent to which the network’s executive chairman was tied to the Clinton campaign.

Since the 2016 presidential election, the network has aggressively conducted itself in a manner more closely aligned with that of a pro-immigration activist organization.  Univision filed an amicus brief before the United States Supreme Court in support of the DACA program, while providing supportive news coverage and suppressing opinions to the contrary or otherwise dismissing any opposition to the program as “anti-immigrant”. When the Supreme Court ruled to uphold DACA based on the Administrative Procedures Act, Univision proceeded to a triumphant mischaracterization of the Court’s opinion as a final upholding, and closed its initial report with Jorge Ramos stating, “Of course, this isn’t over, but continues of course in the next election on November 3rd.”. Such remarks are an unmistakably clear call to vote for candidates that support expanded immigration policies.

It should be noted that Ramos has stated that a continuous flow of Spanish-speaking immigrants, legal or illegal, is key to the survival of Spanish-language TV in the United States. During this 2015 address to Harvard’s Kennedy School of Government, Ramos also stated that:

“I think we can assure you that in the next few decades, you'll see Spanish-language media. That's another topic completely, but the Latino community is keeping so many elements from their country of origin, including Spanish- 9 out of 10 Latinos speak Spanish...speak Spanish at home- that- and we're doing things that Italians didn't do, or Russians, or Eastern Europeans didn't do- and the closeness to our countries of origin and the communications that we have are keeping Spanish-language media alive. And thanks to that, it's a new power that other immigrant communities didn't have in the past.”

In short, Ramos exposed both a business model that relies upon a lax immigration enforcement regime in order to remain viable, and a willingness to nudge trusting viewers to vote for equally-minded candidates.

This pattern of radical advocacy journalism continues into 2020. Prior to Super Tuesday, Univision gave the Democratic primary candidate with the most aggressive immigration platform, Vermont socialist Bernie Sanders, over three times as much coverage as the rest of the Democratic field, while actively promoting a series of policies that are detrimental to the Hispanic community, such as ‘Democratic Socialism’ and the Green New Deal. Additionally, immigration policy advocacy continues to overpower other relevant news items of relevance to the Hispanic community. During the month of January 2020, for example, a Media Research Center study showed that Univision devoted 82 minutes to immigration: twice as much time as was devoted to the impeachment of President Donald Trump (41 minutes) and a staggering 354 times as much time as was allocated to the historic Hispanic unemployment lows reflected in the December 2020 jobs report.

Meanwhile, Univision continues to leverage its news platforms as a vehicle with which to openly campaign against President Donald Trump. While introducing a January 9th, 2020 report on the launch of Michael Bloomberg’s presidential campaign, anchor Patricia Janiot stated:

“In an attempt to court the vote of the growing Latino electorate, Democratic presidential primary candidate Michael Bloomberg launched his first Spanish-language television ad. In the video, Bloomberg, the grandson of immigrants, highlights precisely how important it is for immigrants that Trump be defeated, after implementing tough policies against OUR community.”

It bears repeating that this happened during a late-night newscast and not during an opinion show. Univision’s viewers are deliberately and repeatedly fed rancorous business-interest partisanship in lieu of news.

“We are soldiers of the PRI and of the President (Carlos Salinas de Gortari).”

As recently as 2012, Televisa (then headed by current Chairman Emilio Azcárraga Jean) was accused of showing heavy bias in favor of the PRI’s presidential candidate and eventual victor, Enrique Peña Nieto. That election was marred by allegations of dirty tricks on behalf of Peña Nieto by Televisa. Televisa denied the charges but that perception prevailed and was widely reported here in the United States.

It is hard to believe that Univision, already rife with business-interest political bias, wouldn’t quickly devolve into open partisanship under full Televisa ownership. Would Univision, as a wholly owned subsidiary of Televisa, drive support for American political candidates that align with the PRI’s preferred policy outcomes as they do now for candidates that support open-borders immigration policies? Given Univision’s behavior to date, the answer is yes.

The statutory caps on foreign ownership exist precisely to protect the public interest from such potential undue foreign interference or influence. We can not, under the guise of promoting diversity in media ownership, simply hand America’s airwaves over to foreign individuals and entities who have no stake whatsoever in America’s best interests or in her national security. There can be no doubt that a vote to grant Univision’s Petition for Declaratory Ruling will inevitably lead to undue foreign interference in our political and electoral affairs.

Univision may very well argue that the Commission should approve the Petition for Declaratory Ruling based on the needs of the Hispanic community. Such arguments are undermined by the fact that population growth among U.S. Hispanics is primarily driven by live birth as opposed to immigration, and has been for quite some time.

Finally, we would argue that the Petition for Declaratory Ruling is ultimately sought because Univision until very recently was, per a scathing internal exposé, “an indulgently run and suicidally structured company.” Being poorly run does not constitute an emergency to be resolved by such an extraordinary deviation from statutory caps on foreign ownership. It is the free market, and not the hope of regulatory relief via foreign bailout, that should decide Univision’s fate.

Based on these facts, we request that the Commission find that approval of Univision’s Petition for Declaratory Ruling does not serve the public interest, and deny the Petition pursuant to 47 U.S.C. § 310(b)(4).