Univision and Hillary Clinton: A Timeline of Corrupt Collusion

UPDATED 10/25/16: As part of its ongoing "Podesta emails" campaign, Wikileaks released an email to Clinton Campaign Chair John Podesta from his Chief of Staff Sara Latham, which includes a full rundown of Univision programming for which Hillary Clinton appearances have been requested, and the following quote:

Haim Saban talked to HRC about us not doing enough with Univision and references this show (Sabado Gigante).

There can be no further doubt. 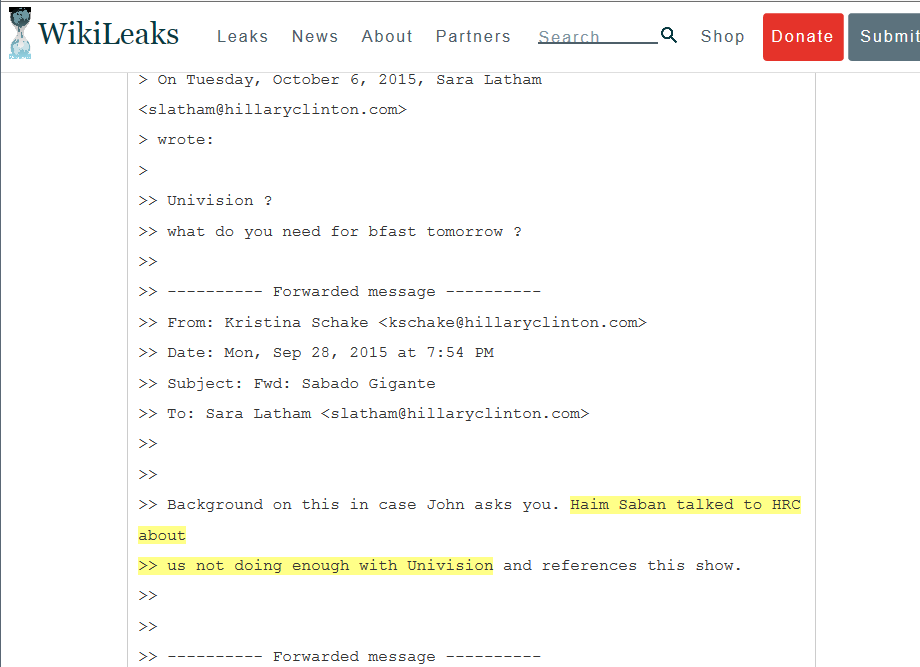 On April 12, 2015, Hillary Clinton published her presidential campaign announcement video. Five days later, Univision Executive Chairman and Clinton Foundation megadonor Haim Saban emails both Clinton campaign chair John Podesta and Univision's then-President of News and Fusion CEO Isaac Lee- a follow-up from prior phone conversations- and directs them to contact each other. Lee (set to deliver his infamous "Nazis" talk at UT-Austin the very next day) agrees to meet with Podesta "ASAP", and the two ultimately agree on a breakfast meeting.

The purpose of this breakfast meeting is revealed in a later email from Fusion Senior VP and Chief Strategy Officer (now President) Boris Gartner, who joined Lee and Podesta for breakfast at the Four Seasons:

As we had discussed when we had breakfast with Isaac in NY, we’ve been thinking about ideas for Univision/Fusion and Hillary.

The first "idea for Univision/Fusion and Hillary, of course, was enacted in the wake of Donald Trump's incendiary announcement speech and Saban's directly indirect influence over both campaign and network - which we covered here.

The collusion paid immediate dividends less than a month later, when Clinton's private e-mail server became a public scandal. On August 8, Communications Director Jennifer Palmieri determined that Univision would be the friendliest venue in which to deal with the email scandal- and that Maria Elena Salinas should handle the interview:

I have a new thought on potential interviewer - María Elena Salinas of Univision. I would bill it as an interview on college affordability and she would ask her a few questions on emails. As you all know, I had hoped that we could use the "server moment" as an opportunity for her to be viewed as having take a big step to deal with the email problem that would best position us for what is ahead. It is clear that she is not in same place (unless John has a convo with her and gets her in a different place). Accepting that, I think Univision is best chance for success. We have momentum coming out of Jeb's women's health comment and their bad debate. A Univision interview will be viewed as more offense and show that she is confident and not rattled.

Of course, Clinton was able to appear "confident and not rattled" and emerged from her Univision interview scot-free, chiefly because Salinas dutifully avoided any serious probing into the budding scandal and allowed Clinton to deflect on to Judicial Watch. (Read the full MRC Latino writeup of that interview here.)

It was the most amazing night!

and the crowd just loved her

all those Univision viewers......

Why was Abedin so exultant about Univision viewers? It was because of this portion of Clinton's victory speech, which Team Clinton knew would get heavy run on the network:

Now it might be unusual, as I’ve said before, for a presidential candidate to say this, but I’m going to keep saying it, “I believe what we need in America today is more love and kindness.”

Because you know what? It works. Instead of building walls we’re going to break down barriers and build ladders of opportunity and empowerment so every American can live up to his or her potential, because then and only then can America live up to its full potential too.

The campaign knew what it had to do in order to get the most favorable coverage. Univision's coverage of Clinton's victory speech predictably focused around the spotlighted quote. This a pretty obvious example of the campaign acting in accordance with Saban's admonition from July of 2015, and giving the network something to cover in a friendly and favorable manner.

These WikiLeaks publications reveal the extent to which Univision and its News Division have been willfully corrupted by the Clinton campaign. Readers of this byline knew that to be the case all along, based on our coverage of the network's pillow-soft coverage of anything having to do with Hillary Clinton. But now there is incontrovertible corroborating evidence to support our longstanding claim- of Univision as a liberal special interest group with a news division, dependent on the election of Democrats to the White House and Congress for their long-term survival.

Exit question: What are the "...basically 2" reasons for which Saban loves Univision viewers?