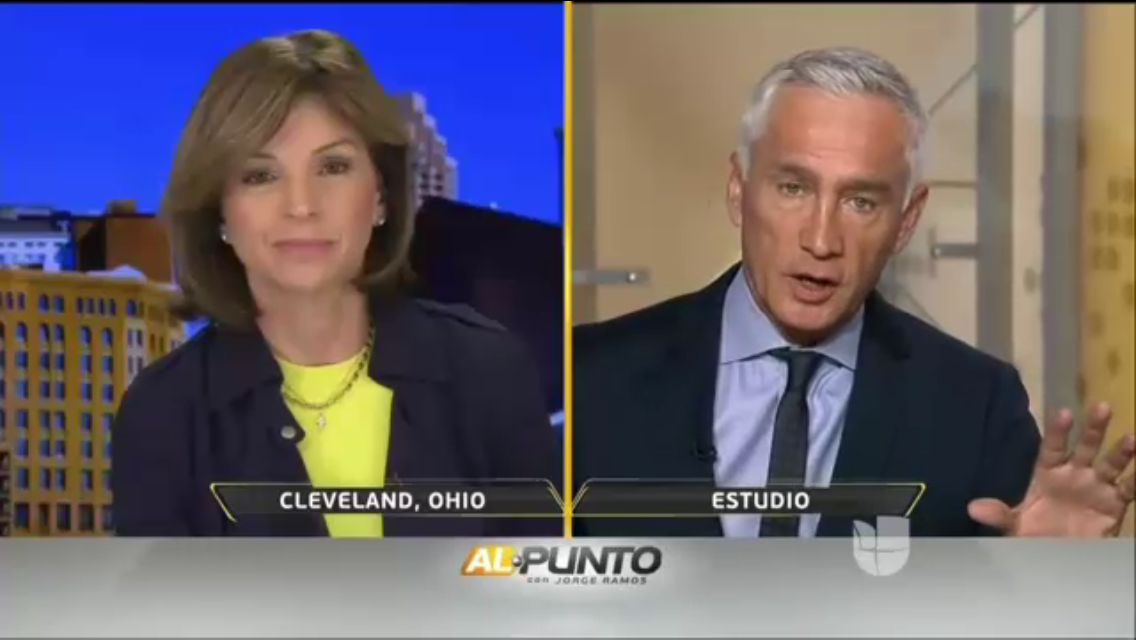 Former Univision News analyst and Univision America radio host Helen Aguirre-Ferre appeared on Sunday's Al Punto, in what was her return to the program since joining the RNC as Director for Hispanic Media. Her interview with host Jorge Ramos went pretty much as expected.

Ramos was a case study in obliviousness and media insularity as he asked Aguirre-Ferre about the problematic nature of having two white men on the ticket, and wondered aloud why there wasn't another minority on the ticket. Here's how she handled the question:

JORGE RAMOS, UNIVISION ANCHOR: The Republican Party has chosen two white men, both for President and Vice President. Does (the GOP's) return to the White House depend on the white population? Why no minorities, Helen? Why are there no minorities on that ticket?

HELEN AGUIRRE-FERRE, GOP HISPANIC MEDIA DIRECTOR: No... Well, I believe we've seen that what you look for is that they be good Republicans, that they be good Republicans with the ability to work together and have a similar vision. I don't think that any of us Hispanics have voted for a Hispanic for President because we haven't had one on the ballot but it doesn't mean that this is indispensable in order to look for solutions. The Democrats haven't put a Hispanic (woman) on the ballot, either, but I can say that for the Republican Party, we had two Hispanic Americans in the presidential primary, and two of them got quite far- two young men. Of course, I am referring to Marco Rubio and Ted Cruz. I think this shows that the party has shown itself to be a diverse party, and truly had the most diversity ever on the primary ballot. A woman, a Hindu, governors, senators, persons from private industry, we had a bit of everything, but the majority of the plurality chose Mr. Trump.

Aguirre-Ferre's response is where one would expect it to be when having to balance advocating for the GOP ticket with navigating Ramos' racial minefield. Nonetheless, one imagines that Aguirre-Ferre had to be taken aback by the sheer gall of Ramos questioning why there were no minorities on the ticket.

After all, it was a mere matter of days after Ted Cruz dropped out of the race when Ramos penned a obnoxious, celebratory column in which he ran down both Cruz and Marco Rubio, attributing their defeat to race-betrayal and expecting a full kowtow from both of them as rehabilitative penance prior to a future run. The dirty little fact is that none of the minorities- certainly none of the Hispanics- with a chance to be at the top of the GOP ticket would have ever been of Ramos' liking. File this away for comparison to his continued shilling for Crown Prince Julián (more on that later).

But he most striking thing about Aguirre-Ferre's return to Al Punto wasn't even the racial question- anyone could've seen that one coming a mile away- but that Univision still can't bring themselves to fully disclose the past relationship between the parties. Ramos opened the segment by saying "Helen has been here many times before"- which is the closest thing to an honest disclosure to emerge from Doral. Back when I first uncovered this double standard, I said:

That characterization is problematic, to say the least, because Helen Aguirre-Ferré was not just an occasional commentator at Univision. In addition to countless segments on Al Punto, Aguirre-Ferré has served as a longtime Republican analyst and was part of the network's coverage of the 2012 Republican convention in Tampa (video here).

Furthermore, Aguirre-Ferré was host of Zona Política (Political Zone), which aired on weekdays from 4-6 Eastern on the network's now-defunct Univision America radio network. Univision's own corporate press release billed the show as a "lively national forum for discussion and debate". Aguirre-Ferré was the network's sole right-of-center host on weekdays (we covered her show's sudden cancellation here).

Many of the segments on Al Punto feature either racial grievance-mongering or some distortion of material facts in advancement of a liberal narrative. Seldom is the segment that features both, but the return of Helen Aguirre-Ferre to Al Punto most definitely delivered.