With the Vatican reportedly set to release a document soon which, among other things, holds that climate change is a manmade phenomenon, MSNBC host Chris Matthews devoted an entire segment which all but suggested that not only are conservative Republicans "science deniers" they're anti-Catholic.

But in the midst of all that, Matthews also found room to slam Sen. James Inhofe (R-Okla.) as "Ayatollah-ish" for stating that it's arrogant to think man can change the Earth's climate and that God has somehow relinquished His control of the planet.

CHRIS MATTHEWS: Republican Senator Jim Inhofe of the oil patch down in Oklahoma, chairs the Senate Committee on the Environment, surprisingly. He's perhaps the biggest science denier in the Republican party. This February he brought a snowball on to the Senate floor to disprove global warming.

Sen. JAMES INHOFE (R-Okla.): I asked the chair, you know what this is? It's a snowball. And that's just from outside here. So it's very, very cold out, very unseasonal. So there, Mr. President, catch this. Mm-hmm. 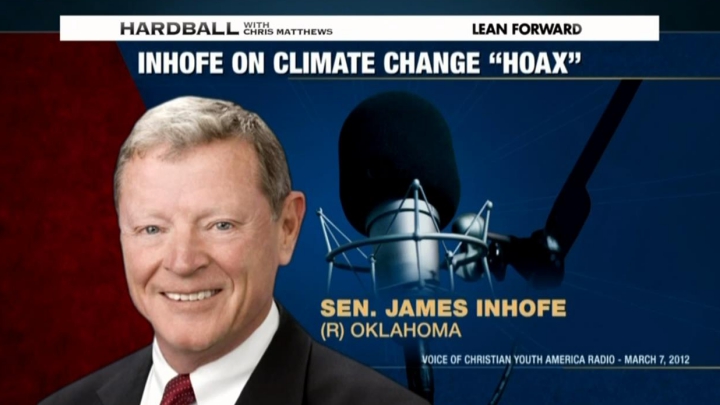 MATTHEWS: Anyway, he also said that he doesn't believe in manmade global warming because according to the Bible, God controls the climate. Let's listen.

INHOFE: My point is God's still up there. And the arrogance of people to think that we human beings would be able to change what he is doing in the climate is, to me, outrageous.

MATTHEWS: Going to religion on these questions, on that kind of point of view.

According to Matthews, it's theocratic for an elected official to say that God is in control of the universe He created -- a perfectly orthodox tenet held by Catholics and Protestant Christians -- but when the pope is reportedly set to rebuke folks the world over for the need "to be aware of the need to change lifestyles, production and consumption" in order to stave off climate change, well, that's simply a life issue that's on par with, if not more important, than the issue of abortion:

MATTHEWS: Human life, you know what I'm talking about, a lot of the Church, the stuff about sexual behavior, they, it's always, whether it's same-sex or it's abortion, it's not really about life, but it's about life, but it's also about sexual discipline and behavior. This is a life issue, the life on this planet. That's why the pope's involved in it. You know, if conception -- if life begins with conception, how about life begins with human life on this planet? I mean, it's endangered over time. It's a legitimate concern of a moral leader, it seems to me.

The argument from Matthews, it seems, is that the Church's biblical teachings on sexual morality -- which are matters of doctrine and ergo of greater weight than anything prudential the pontiff may weigh in on -- are to be discounted because they are fundamentally about bedroom regulation. But Pope Francis's thoughts on global warming and its supposed genesis in human economic activity, now THAT's something Matthews and gang can shout "Amen!" to. Nevermind, of course, that regulatory actions by governments the world over meant to ameliorate global warming would be far more encroaching on the privacy and liberties of individuals than anything the Catholic church has to say about sex.

Of course, all of this is hardly surprising coming from the guy who insisted that converts to the Catholic faith were driven by anti-gay bigotry.