On Sunday, This Week moderator George Stephanopoulos interviewed Indiana Governor Mike Pence and repeatedly pressed him for defending his state's religious freedom bill, and touted the argument that it was an anti-gay law.

Throughout the combative interview, the liberal ABC anchor asked Governor Pence to clarify the intent of Indiana’s version of the Religious Freedom Restoration Act and repeatedly wondered “if a florist in Indiana refuses to serve a gay couple at their wedding, is that legal now in Indiana?”

Stephanopoulos’ questioning of Pence comes on the heels of the “big three” (ABC, CBS, and NBC) networks devoting more than 14 minutes to the Indiana law in a span of 24-hours.

The heated discussion began with the ABC host wondering “this is a yes or no question. Is Advance America right when they say a florist in Indiana can now refuse to serve a gay couple without fear of punishment?”

After Pence stressed that the law was designed to protect private businesses from government overreach, the ABC host continued to wonder “yes or no, if a florist in Indiana refuses to serve a gay couple at their wedding, is that legal now in Indiana?” 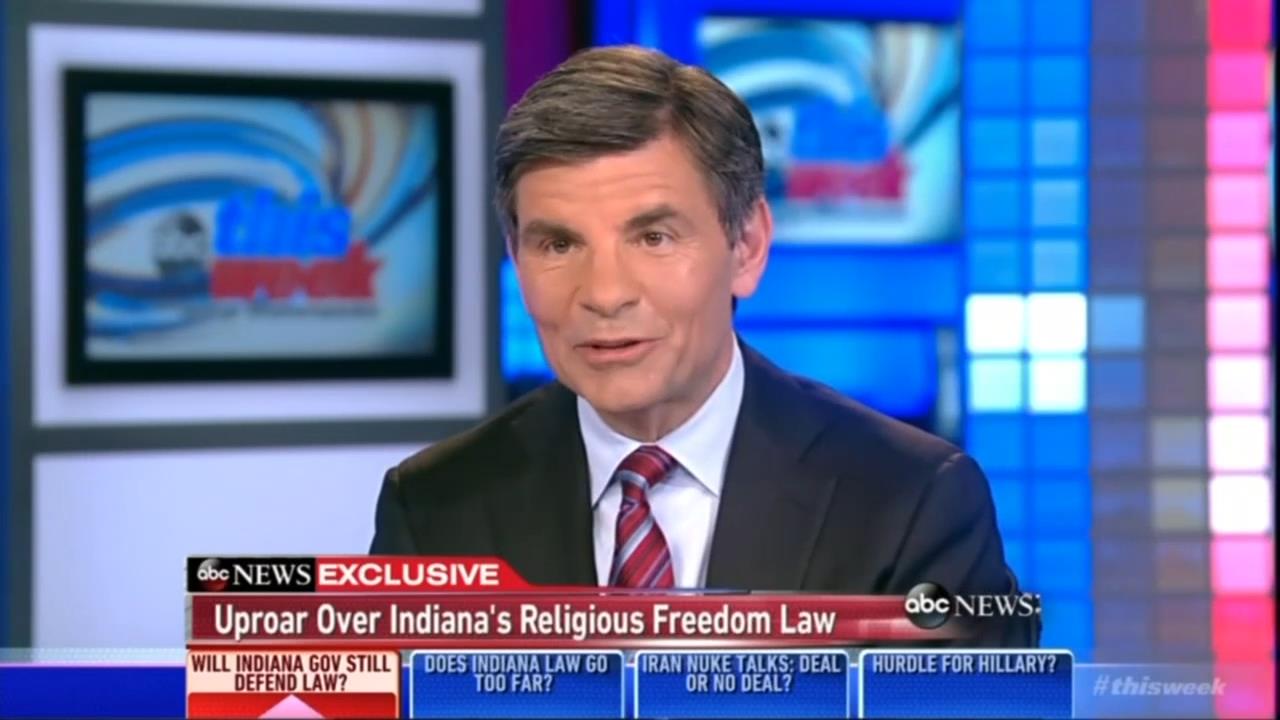 In total, the ABC host asked his Republican guest some version of this question 5 times throughout the interview.

Unsurprisingly, George Stephanopoulos is no stranger to badgering Republicans on social issues. During ABC’s GOP presidential debate in 2012, the ABC host wasted 7 questions on the issue of contraception.

During the 2012 GOP debate, Newt Gingrich scolded the ABC host for “news media bias” in the line of questioning and during Stephanopoulos’ interview with Governor Mike Pence the GOPer called out Stephanopoulos for giving in to the liberal media frenzy over the religious freedom bill:

We've been doing our level best George to correct the gross mischaracterization of this law that has been spread all over the country by many in the media. And frankly some of the media coverage of this has been shameless and reckless and the online attacks against the people of our state, I'm just not going to stand for it.

MIKE PENCE: Good morning George. Thanks for the opportunity.

STEPHANOPOULOS: So was it a mistake to sign this law?
--
STEPHANOPOULOS: But I think one of the problems that people have pointed out is that in Indiana your civil rights laws don't include sexual orientation as a protected class in Indiana. And even some of the supporters of the bill, who appeared with you when you signed the bill, Eric Miller of Advance America wrote that it will protect those that oppose gay marriage.

He put up this example. He said “Christian bakers, florists, and photographers should not be punished for refusing to participate in a homosexual marriage.” So this is a yes or no question. Is Advance America right when they say a florist in Indiana can now refuse to serve a gay couple without fear of punishment?
--

STEPHANOPOULOS: Let me try to pin you down there though on it because your supporters say it would. So, yes or no, if a florist in Indiana refuses to serve a gay couple at their wedding, is that legal now in Indiana?
-- 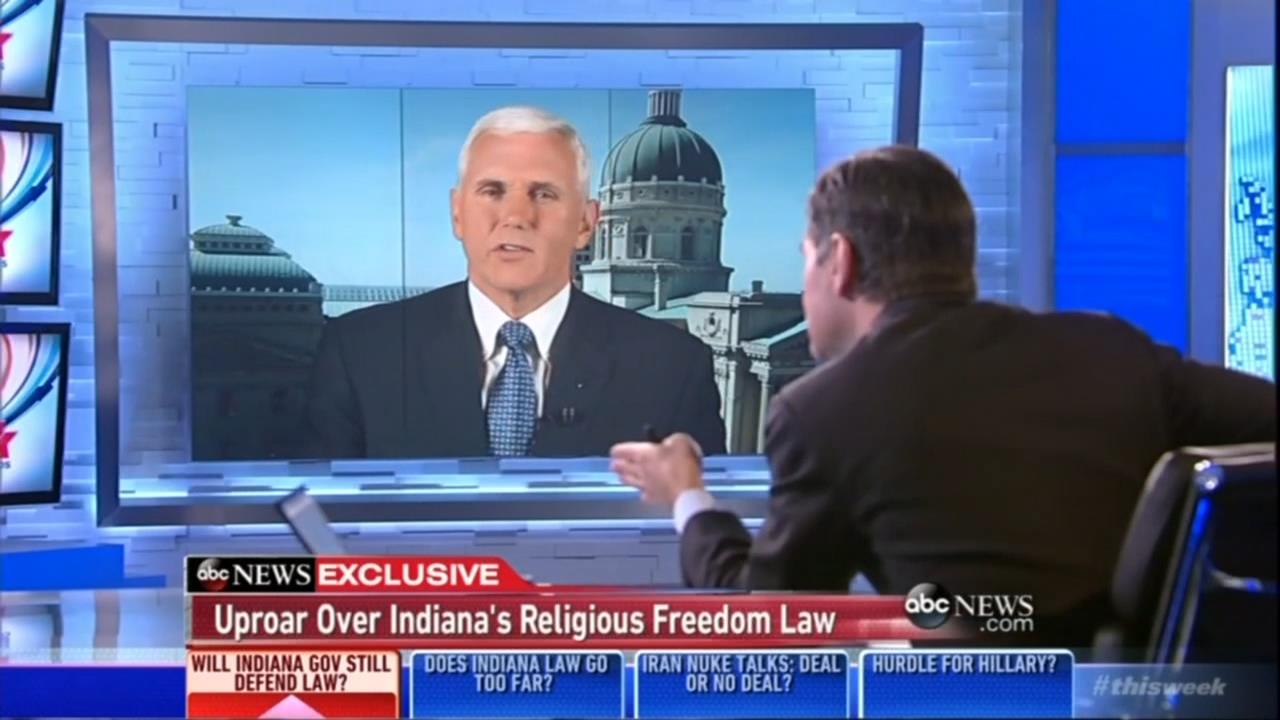 STEPHANOPOULOS: It's just a question, sir, yes or no?
--
STEPHANOPOULOS: Sir, I'm just bringing up a question from one of your supporters. That was one of your supporters that was talking about the bill right there. It said it would protect a Christian florist against any kind of punishment. Is that true or not?
--
STEPHANOPOULOS: So when you say tolerance is a two-way street, does that mean that Christians who want to refuse service, or if people of any other faith who want to refuse service to gays and lesbians, that's its now legal in the state of Indiana? That's a simple yes or no question.
--
STEPHANOPOULOS: Final question. Final yes or no question governor. Do you think it should be legal in the state of Indiana to discriminate against gays or lesbians?
--
STEPHANOPOULOS: Yes or no, should it be legal to discriminate against gays and lesbians?