Following the deadly Islamic terrorist attack in Paris on Wednesday, major broadcast networks ABC and NBC joined other news outlets in not showing any of the controversial cartoons of the Islamic Prophet Muhammad from the Charlie Hebdo magazine during their evening newscasts.

Despite initially telling Buzzfeed that they would not be showing any of the cartoons, CBS News did go forward and displayed three of them on the air during the CBS Evening News with Scott Pelley. The three were shown as part of a report by CBS News foreign correspondent Elizabeth Palmer from Paris that led off the broadcast. [MP3 audio here; Video below]

A CBS News spokesperson later stated that the network “will make an editorial decision based on the relevancy of the story.”

As of late Wednesday night, the number of outlets that had decided not to show any of the cartoons in question was extensive and ranged from English and Spanish networks to newspapers and news wires: ABC, the Associated Press, CNBC, Jewish Chronicle, MSNBC, MundoFox, NBC, New York Daily News, and The New York Times, Telemundo.

In the instances of CNN and the Fox News Channel (FNC), both outlets showed the cartoons early in the day on Wednesday before both releasing statements saying they would not be showing them again.

On CNN, New Day anchor Chris Cuomo had one of the controversial cartoons from Charlie Hedbo shown on-screen during the 8:00 a.m. hour and told viewers that “[i]f they are not able to get their message out, we will get it out for them.” 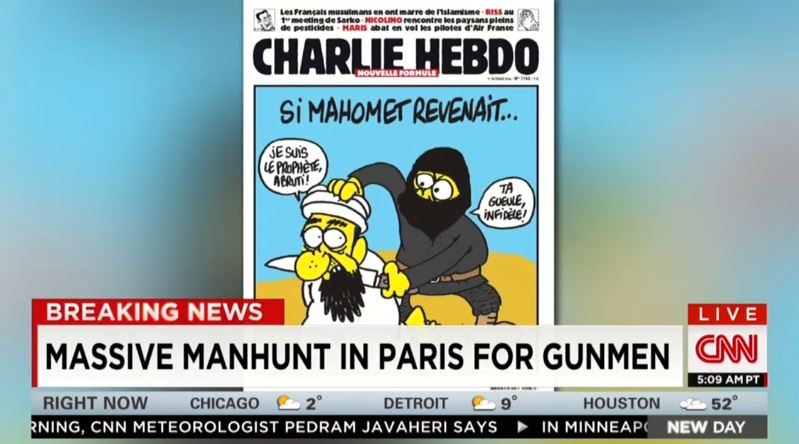 Following an internal memo that announced CNN would not be showing the cartoons, a CNN spokesperson said hours later that the cable outlet would be “actively discussing the best way of addressing the key issues and images across all of our platforms” both “throughout the day and beyond as the story develops.”

Similarly, during the 8:00 a.m. hour, FNC’s Fox and Friends displayed a separate one during its live breaking news coverage. Later in the day, however, a Fox News spokesperson told The Washington Post and other news outlets that it had “no plans” to show the cartoons again. However, a slideshow containing some of the cartoons remained on Fox News’s website as of 12:00 a.m. Eastern time on Thursday.

As far as The Washington Post was concerned, it announced Wednesday evening that it will show one of the cartoons on its editorial page in the Thursday edition of the newspaper. 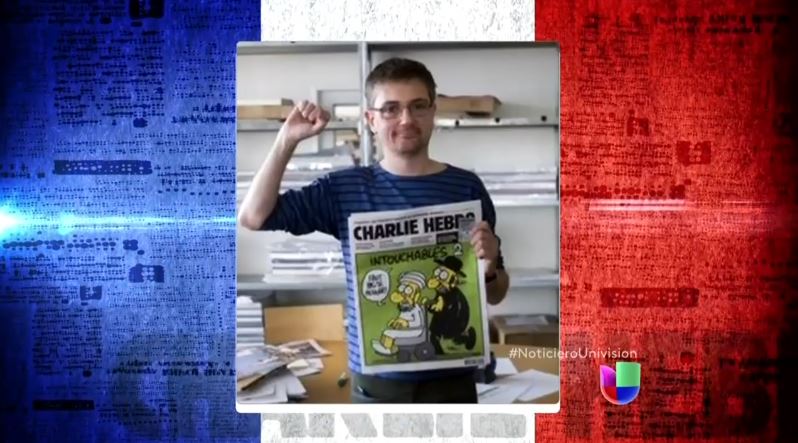 Also on Wednesday night, the USA Today editorial board included two of Charlie Hebdo’s Muhammad cartoons in the online version of the staff editorial that was slated to appear in the print paper on Thursday. However, it would be printing a column by the radical Imam Anjem Choudary, who has a long track record of making repulsive statements (which you can read about here, here, and here).

UPDATE, 4:40 p.m. Eastern, January 8: An earlier version of this post erroneously listed Spanish-language network Univision as one of the news outlets that had not shown any of the Charlie Hebdo cartoons of Muhammad during their news coverage. During Wednesday's Noticiero Univision, the program did indeed show two of the controversial cartoons as part of their extensive coverage. NewsBusters regrets the error.