When the now-retracted article by the Rolling Stone magazine was published on November 19 about a brutal gang rape of a first-year student at the Phi Kappa Psi fraternity house at the University of Virginia (UVA), the major broadcast networks rushed to the story and devoted multiple segments to both the article and reaction on the school’s campus.

In doing so, they failed (unlike other outlets) to point out its flaws that brought an apology from the liberal magazine on Friday afternoon after it came to realize that many of the key facts in the story were in doubt. Further, the reporter at the center of the piece, Sabrina Rubin Erdely, neglected to even seek comment or a telling of events from those alleged to have attacked the UVA student referred to as “Jackie.” [See video below comparing the network coverage now and when the article was first published]

The “big three” of ABC, CBS and NBC offered coverage on their evening newscasts over the course of November 23 and 24, with ABC’s World News Tonight and NBC Nightly News covering it on the 23rd. The following night, an additional report was filed by ABC and NBC each to go along with the first from the CBS Evening News with Scott Pelley. On those two evenings alone, the total network coverage was 11 minutes and 14 seconds.

While the three programs combined for just under 8 minutes of thorough coverage on Friday night, that does little to excuse their inability to investigate the story independently or even check the facts of the Rolling Stone piece on their own.

On ABC’s World News Tonight on November 23, reporter Bazi Kanani promoted the article that led to the decision to shutter all fraternities until January as a “explosive exposé” that she then used to shape much of the segment.

That same evening on NBC Nightly News, NBC News correspondent Gabe Gutierrez described the piece as a “detailed article” of what happened to Jackie when was raped and how UVA was one of 55 schools under investigation by the federal government for their handling of sexual assault complaints.

In all of the reports, correspondents relied on the Erdely’s story and interviews with angry students protesting both the fraternity in question and a “rape culture” that was pervasive at UVA and on campuses nationwide.

When it came to the coverage on Friday, the networks did not mince words nor shy from finally walking through what was questionable about Jackie's account. World News Tonight anchor David Muir and correspondent Linsey Davis said the magazine’s apology was a “stunning turn of events” with Muir adding that it was “sudden reversal” from last month’s publication that had led to a “new outrage already.”

Substitute CBS Evening News anchor Maurice DuBois stated that the original article had “cast a harsh spotlight” on the school, but now has caused its own publisher to have “doubts” about the foundation of Jackie's story.

On NBC Nightly News, anchor Brian Williams was the sole anchor to admit that his program had filed stories based off of the very article that he and NBC’s Kristen Welker would now report had major “discrepancies.”

Still, the networks had pitfalls in their coverage of the retraction. As suggested two sentences prior, ABC and CBS failed to join with NBC in not admitting to having previously blindly covered this subject.

Also, CBS and NBC fell short in only interviewing students who, respectively, suggested pieces like this are why victims hesitate coming forward and dismissed the fact that the story is now in severe doubt because the issue of sexual assault is “still a problem” on college campuses “even if it's not real.”

As the NBC report began to draw to a close, Welker included a soundbite from a reporter with The Washington Post who tried to relate to Jackie and what she was going through: “I can imagine it may be hard to come to grips with, you know, aspects of your own story that aren't, you know, lining up correctly.”

The complete transcript of the segment that aired on ABC’s World News Tonight with David Muir on December 5 is transcribed below. 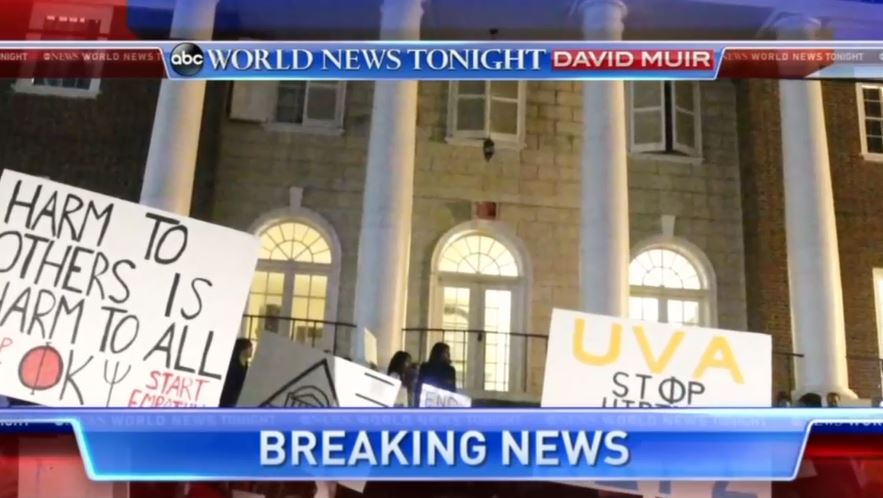 DAVID MUIR: Breaking now, the stunning turn of events. The rape case that made national headlines and, tonight, the apology, was it true?

MUIR: Good evening, we begin this Friday night with breaking news on several fronts. First, the explosive case, and now a sudden reversal. It was a story of rape at one of the country’s most famous universities: Seven young men accused. An article in Rolling Stone. It triggered emotional protests at the University of Virginia and huge fallout. Fraternities shut down, investigations launched and yet, tonight, a stunning statement from Rolling Stone about the young woman at the center of their story, saying, quote, “we have come to the conclusion that their trust in her was misplaced.” ABC’s Linsey Davis with the new outrage already. 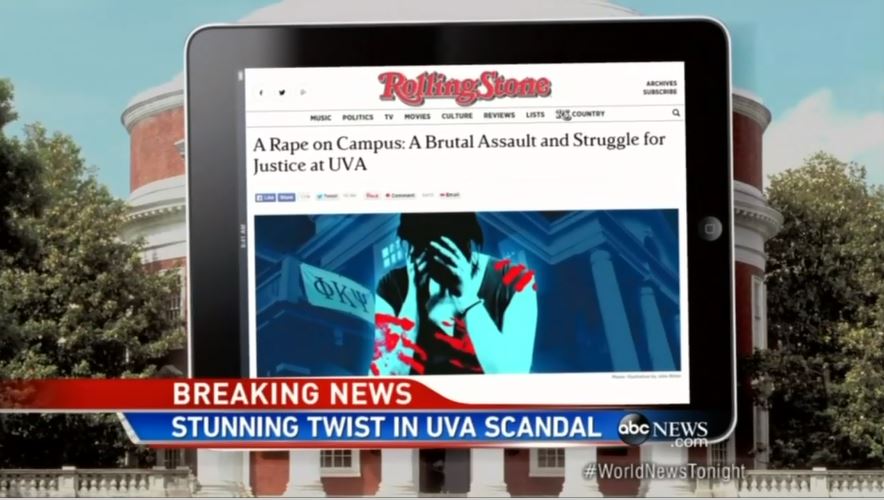 LINSEY DAVIS: A stunning turn of events tonight to those claims of alleged gang rape at one of Americans most elite universities. Discrepancies in Jackie, the alleged victim’s account are beginning to surface. Tonight, Rolling Stone magazine now apologizing and expressing regret that they never contacted the alleged attackers to get their accounts. In November, the elite university campus was rocked when that article described, in horrifying detail, a violent rape by seven members of the Phi Kappa Psi fraternity during her first year at the University. [WOMEN PROTESTERS SCREAMING] But here's where doubt has been cast on three key allegations: First, the fraternity denies there was a social event at the house the weekend of the alleged rape. Second, the accuser says her rape was part of a falling pledging ritual, but the fraternity says initiations only happen in the spring, and third, according to the article, Jackie says that she was lured to the fraternity by a member who worked with her at the campus aquatic center, but according the fraternity, none of its members worked there at the time. The fraternity releasing this statement, saying their “initial doubts as to the accuracy of the article have only been strengthened” after investigating the claims. Jackie told The Washington Post today she's standing by her story. Tonight, UVA students say they hope this doesn't discourage rape victims to come forward.

UNIDENTIFIED FEMALE UVA STUDENT: I hope that this isn’t something that causes future questioning of victims, survivors. 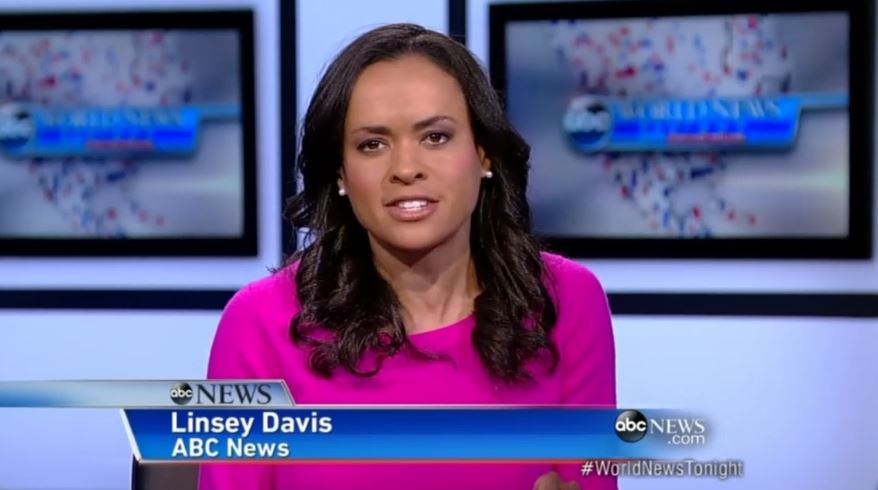 DAVIS: UVA's president just released a statement, saying “today’s news this must not change how rapes are handling on college campuses” and Rolling Stone’s managing editor says the reason they did not reach out to any of the attackers was to honor Jackie’s request because she feared retaliation. The search for the truth continues tonight, David.

MUIR: Alright, Linsey Davis leading us off. Linsey, thank you.

The transcript of the segment that aired on the CBS Evening News on December 5 can be found below. 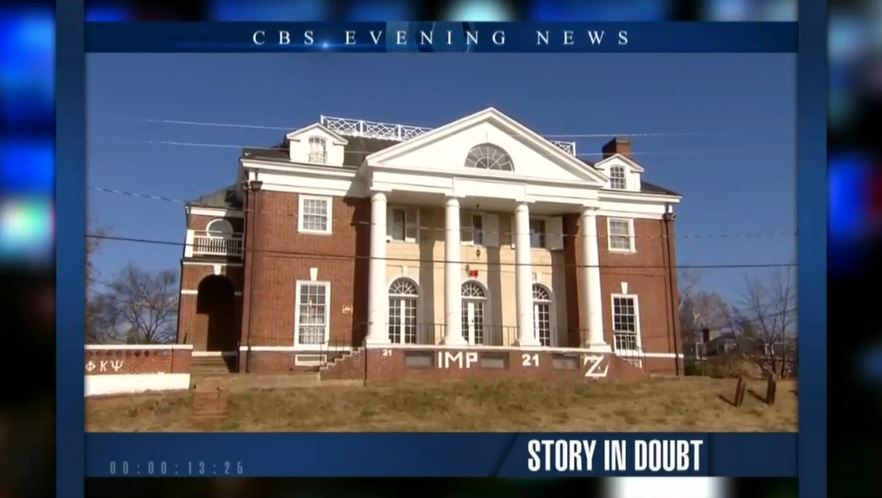 MAURICE DUBOIS: An alleged gang rape at a fraternity sent shock waves across the nation. Now the magazine that broke the news apologizes, saying it has doubts about the accuser's story. Nancy Cordes has the latest.

DUBOIS: Rolling Stone magazine apologized today for an article that generated worldwide headlines and cast a harsh spotlight on the University of Virginia. A student claimed she was being raped by a gang of students at a fraternity party and was ignored by campus officials. Nancy Cordes tells us Rolling Stone is now backpedaling on the story. 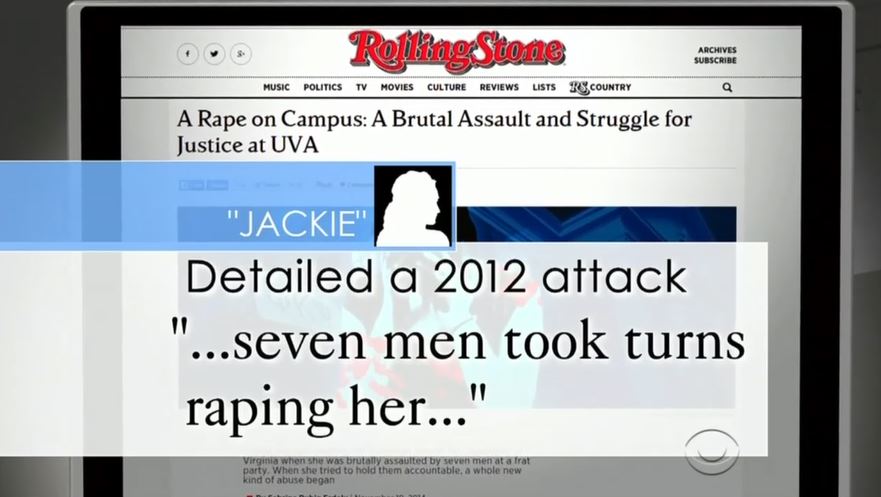 NANCY CORDES: The article was called, "A Rape on Campus" and it detailed a 2012 attack on a freshman Rolling Stone called “Jackie” who described being thrown through a low glass table as seven men took turns raping her at UVA's Phi Kappa Psi fraternity. The story led school officials to suspend all fraternities for the semester. Phi Kappa Psi was vandalize, but as other outlets began to investigate, discrepancies's emerged. Jackie told Rolling Stone for instance, she was attacked while attending a date function with a fraternity member she met “while working lifeguard shifts together at the University pool.” In a statement, Phi Kappa Psi said today, “As far as we have determined, no member of our fraternity worked at the aquatic center in any capacity during this time period” and “the chapter did not have a date function or social event during the weekend of September 28, 2012.” Today, Rolling Stone's Managing Editor Will Dana released this statement, “There now appear to be discrepancies in Jackie's account and we have come to the conclusion that our trust in her was misplaced.” Some of those discrepancies might have come to light sooner if the magazine had reached out to Jackie's alleged attackers. But Dana says “We decided to honor her request not to contact any of the men she claimed participated in the attack for fear of retaliation against her.” Dana says, “We now regret the decision.” Some students worry this whole incident will discourage victims from speaking up. First year Hannah Hall. 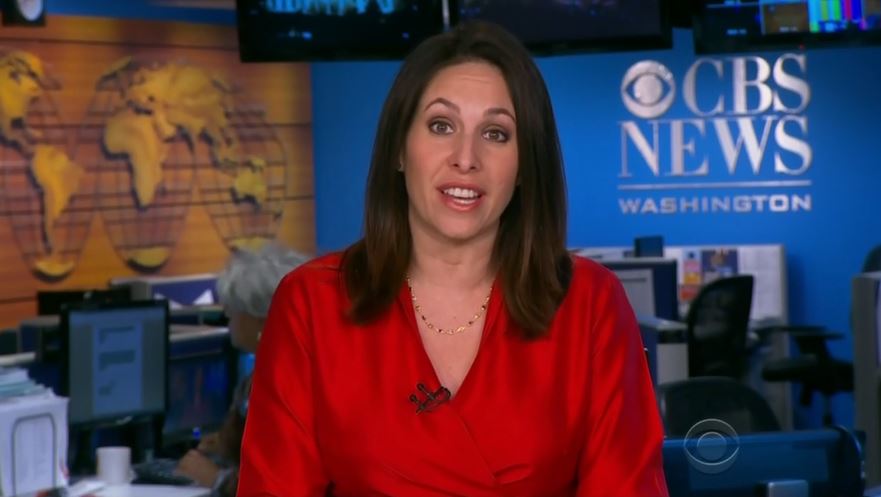 CORDES: Jackie told The Washington Post she stands by her story and her faculty adviser told us she thinks Jackie is honest and was assaulted. Maurice, tonight, the President of UVA says the school has a new focus now on campus rape and that today's developments, quote, “must not alter this focus.”

The complete transcript of the segment that aired on NBC Nightly News on December 5 is transcribed below. 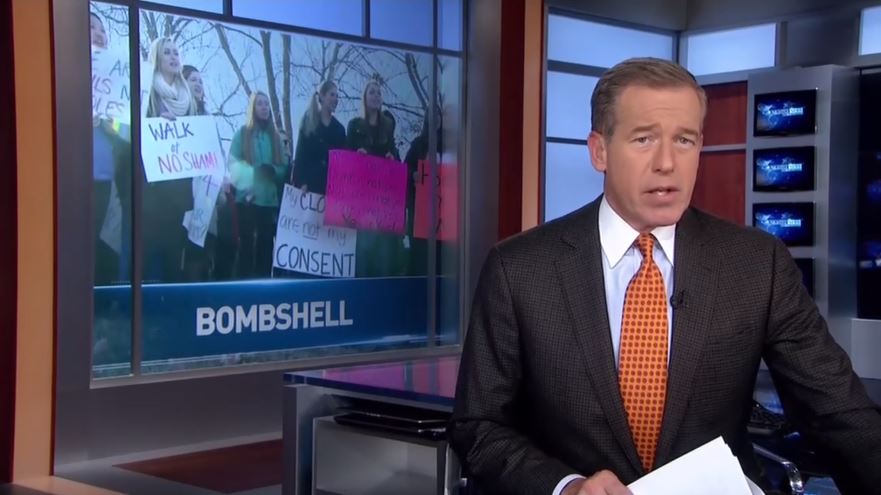 BRIAN WILLIAMS: A bombshell turn of events raising doubts about accusations of a brutal attack on a well-known college campus. Discrepancies in the story rocking a big university and a big name in publishing.

WILLIAMS: We now turn to a surprising turn of events tonight concerning high profile sexual assault accusations at a storied American college campus, an institution founded by Thomas Jefferson, the University of Virginia. Accusations that set off a torrent of outrage. Well, tonight, doubts are being raised about the accuser's story, which was first published in Rolling Stone then reported on widely, including on this broadcast. We get the very latest tonight from NBC's Kristen Welker.

KRISTEN WELKER: Students at UVA are reeling tonight after learning there are now serious doubts about an alleged gang rape on campus that led to a police investigation, widespread protests and suspension of all Greek life. 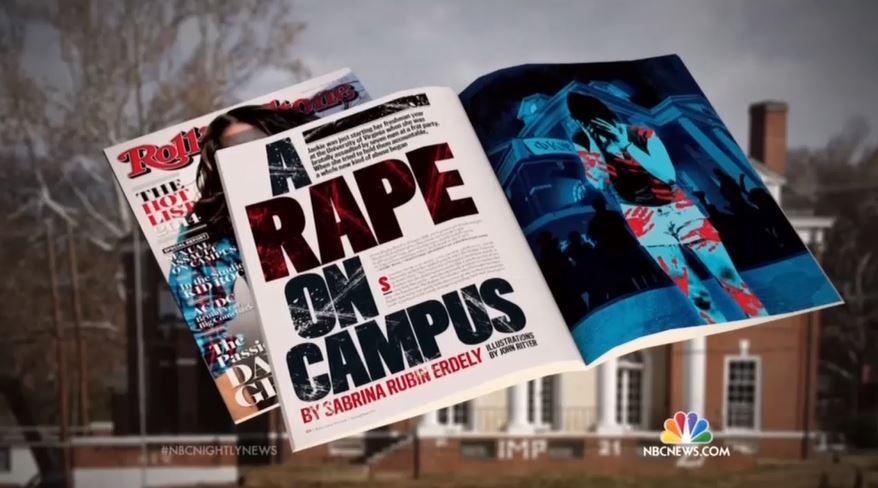 UVA STUDENT KERI BAUMGARNER: I think the general consensus was that even if it's not real, it's a problem even if that particular story wasn't real, it's probably still a problem.

WELKER: The bombshell claims made last month when Rolling Stone magazine reported that a student named Jackie said she was brutally gang raped by seven men at a Phi Kappa Psi fraternity party in 2012, but late today, Rolling Stone backpedaled in a statement, writing, “[i]n the face of new information, there now appear to be discrepancies in Jackie's account, and we have come to the conclusion that our trust in her was misplaced.” The magazine also acknowledged its reporter, Sabrina Rubin Erdely, never talked to Jackie's alleged accusers, saying Jackie asked the publication not to for fear of retaliation. Representatives with the fraternity released a statement saying they never had a party during the weekend in question, none of their members were lifeguards as Jackie told Rolling Stone and sexual assaults are not a part of a pledge ritual as Jackie alleged. In an article today, The Washington Post reported Jackie's friends recently began to question her account. The Post interviewed Jackie last night.

THE WASHINGTON POST’S T. REES SHAPIRO: I can imagine it may be hard to come to grips with, you know, aspects of your own story that aren't, you know, lining up correctly. It's difficult to say what she really thinks right now. 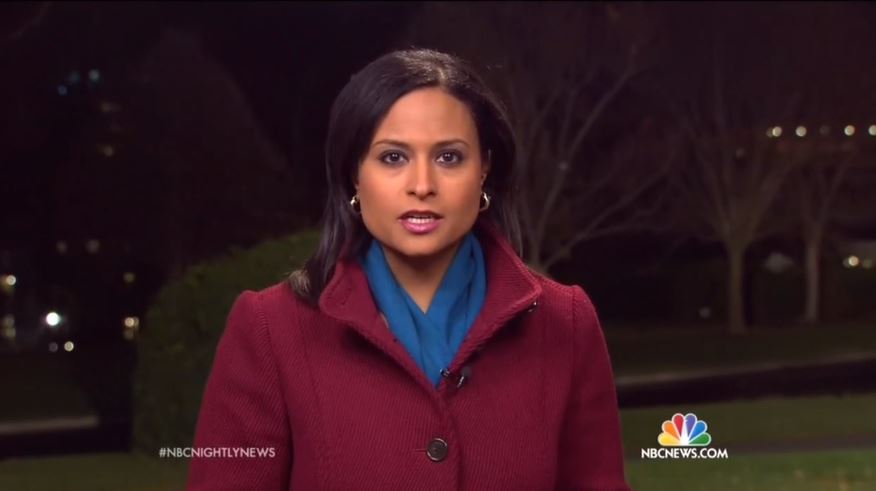 ULTRAVIOLET’S EXECUTIVE DIRECTOR SHAUNNA THOMAS: The worst thing that could come out of this is that even more people are afraid of speaking up about their experience being raped or sexually assaulted.