On Fox News, Raymond Arroyo Owns the Libs and Wants Us to Party for July 4 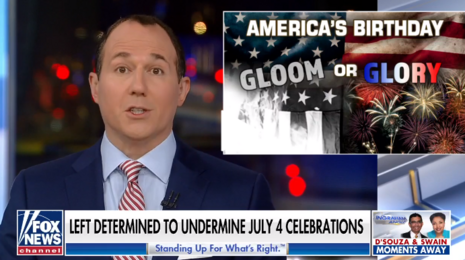 This weekend we will celebrate the birthday of the greatest country in the whole world. Patriot and absolute baller Raymond Arroyo encouraged Americans to heed the wishes of the Founding Fathers by wholeheartedly celebrating freedom while hosting the July 1 episode of The Ingraham Angle. Arroyo coupled his message of patriotism with a thorough deconstruction of the left’s agenda of sabotaging the Fourth of July.

Too often in recent history has the incredible legacy of this great nation and its citizens been openly criticized and derided by its own people. To display the extent of the rampant decrease in American patriotism, Arroyo references a new Fox News poll that finds that only 69% of Americans believe that the U.S is the best country in the world to live in now. Only just a few years ago, this number was significantly higher coming in at 83%. The sudden and marked decline in love of country can be attributed to the systematic indoctrination of anti-American sentiment by means of the media and education system, according to Arroyo.

The “intentional racial division and the trashing of America’s past” is one reason Arroyo cites along with the indoctrination of youth to hate America - “Young people are taught that America is an irredeemable place predicated on the sin of slavery and colonization which continues to this day.” The brainwashing process now complete, the false ideology ingrained within them issues forth from their mouths. “Stuffed with deformed history and lukewarm Marxism, the acolytes dutifully repeat their catechism,” Arroyo says.

The subversion and distortion of the truth of our great nation is indicative of the power play between those that wish to destroy and overcome America and those great patriots who stand in defense of our incomparable freedoms. The demoralization and feminization of America continues and is made more successful without fearless patriots “who stand tall, do the right thing, and fear no one but God.”

The suppression of widespread understanding and appreciation of American exceptionalism is the greatest threat to the nation’s future. Arroyo highlights the outrage of such a phenomena: “If someone were defaming your relatives, your grandparents, you’d be mad as hell. And that’s what’s happening here.” Americans must not be weak, feel shame for the past or be guilty for sins they did not commit. The public humiliation ritual has to end, and what better time than July 4th to embrace unapologetic patriotism.

Contrary to what the ideologues would have you believe, “This is not a sober reckoning with American history, but a strafing of it,” as Arroyo says. “We owe our children the whole truth, good, bad and ugly.” He then references a recent and ridiculous instance of revisionism from the National Archives, the agency which exists for the purpose of preserving and documenting government and historical records.

“Now, to add asininity to injury, a task force at your National Archives of all places has a new report that the Rotunda, which houses the Declaration of Independence and the U.S. The Constitution is itself an example of structural racism. Why, you ask? Because the Rotunda, quote, ‘lauds wealthy white men in the nation’s founding while marginalizing Black, indigenous and other people of color, women and other communities.’"

The inherently divisive nature of this pernicious mentality “divides people by sex, race, and religion.” The shameful display of Olympic athlete Gwen Berry is consequential to its taking hold, according to Arroyo. “Last week, she made a big show of disrespecting the flag of the country she competed to represent. Not only did she ignore the anthem, she threw a t-shirt over her head in protest.” Distinctly, Berry “had no problem waving her flag and representing her country,” when she first qualified for the Olympics in 2015. He asks, “Then what happened between 2015 and 2021?” This sad change in Berry’s attitude toward her own nation and people can be explained by having been “repeatedly told about the gloom of America, focusing on her problems and setbacks and sins.”

“But, like the people who make up America, that’s not all there is. We are a good, inventive and loving people. And this July 4th, let’s rekindle John Adams’ rays of ravishing light and glory and celebrate them despite our differences as one American people,” concludes Arroyo.

With a return to tradition and by relishing the precious freedoms prescribed to us by God, not to do what we want to do but what we ought to do, we shall.