The left is great at overdramatizing situations, living in la la land and being ignorant of any perspective other than their own. They’re also professional tantrum throwers when they don’t get their way. 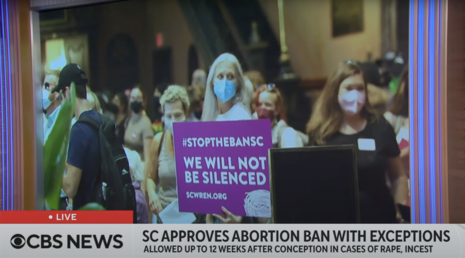 Late Tuesday afternoon, the House in South Carolina passed a near total abortion ban with some exceptions. Even though the ban doesn’t protect all life from the moment of conception, it’s a step in the right direction. Lefties on Twitter lost it over the news.

The South Carolina House approved the bill that prohibits abortion in all cases except pregnancies caused by rape or incest. CBS indicated that the “chamber initially rejected the bill without the exceptions.”

Pro-life Republicans opposed the initial phrasing of Bill 5399 as they, like everyone should, think abortion should be prohibited in all circumstances and would not vote for it. This caused lefties to believe they'd won. Planned Parenthood of South Carolina threw a celebration.

The abortion bill’s failure gets announced at Planned Parenthood in Columbia pic.twitter.com/JJsbyl2Hme

But their cheers quickly ceased when Republicans changed their minds and voted for H. 5399. I suppose some restrictions are better than none. The bill will go through one more vote then move onto the senate before taking effect. Nothing triggers lefties like the fear of live babies.

Katie Crosby is a candidate for SC House who is proudly endorsed by Planned Parenthood. Go figure this was her response.

Let me be clear: abortion access must remain legal, in all circumstances. Medical decisions need to remain between a patient and their doctor, not the South Carolina General Assembly. pic.twitter.com/Syl5MFKij4

Human rights lawyer (minus the human rights of an innocent baby in the womb) Quasim Rashid, laughably called the “cruel” and “horrific” vote a way to “kill women.”

BREAKING: After his lengthy emotional comments about his mistakes in banning abortion, GOP State Rep @collins_neal votes for a near total ban in South Carolina anyway.🤦🏽‍♂️

This horrific vote will kill women. This GOP cruelty and soullessness is the point. Vote Them All Out. pic.twitter.com/IQarG5gP1s

Planned Parenthood, the group who promotes anything BUT parenthood, dropped a few tweets expressing its distaste for the vote.

This near-total ban on abortion will exacerbate a maternal and infant mortality crisis in the state. SC maintains some of the starkest health disparities in the country, with Black women dying at four times the rate of white women after they have given birth. #scpol #StopTheBanSC https://t.co/VxXvyFNVgV

Obviously Planned Parenthood would be pissed off. How will it remain in business if it can’t kill babies anymore?

The lunacy is no laughing matter … well, maybe it is. But after you get past the initial shock at the responses these people come up with, you begin to wonder how someone could actually, confidently stand for something as vile as abortion.

While the value of life in South Carolina is on the rise legally, pray that the hearts and minds of the brainwashed left will change too. Time will tell.