This is a victory for religious freedom. 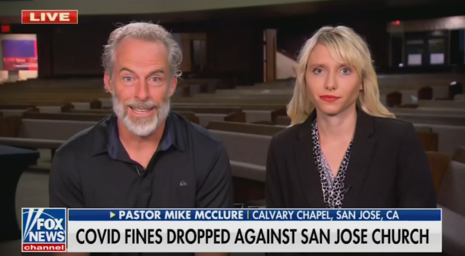 Calvary Chapel San Jose in California was fined $200,000 from the state and $2.8 million from San Jose County for holding worship services and not enforcing mask mandates amid the COVID-19 pandemic. Some charges have since been dropped, but lead pastor Mike McClure deemed the fines “unconstitutional” and a violation of the First Amendment.

When the church was presented with the fines back in 2020, it refused to pay. The church reportedly failed to follow COVID-19 restrictions like holding in-person services, loose mask mandating, and a failure to submit social distancing protocol to the county.

Pastor McClure and attorney Mariah Gondiero of Advocates for Faith & Freedom, spoke with Fox Thursday morning. The pair deemed the fines discriminatory and an attack on religious freedom.

Gondiero pointed out that the California court dropped the charges due to the recent Supreme Court rulings that sided with freedom of speech, most specifically religious freedom, as evidenced by the Kennedy v. Bremerton School District case.

The attorney also noted the hypocrisy in California's COVID-19 restrictions. Though the state had and still has stringent restrictions, it treats liquor stores, shopping stores and and pot shops “more favorably than churches,” Daily Citizen reported.

Fox News host Carly Shimkus noted the idiocy in prioritizing the attack on churches when there are so many other, more pressing concerns in the state. Insane tax rates, sanctuary state status for baby killing and having Gavin Newsom as governor to name a few.

It’s persistence paid off and the $200,000 fine was dropped this week. The $2.8 million fine is still in deliberation, but McClure isn't focused on that. He's more concerned with being able to share the good news of the Gospel.

We need a great awakening, you know, hope comes from Christ. He’s the one who died for us. The governor didn’t die for us. The county didn’t die for us. When you look at the reality of what Christ has done in people’s lives, and can do again in this generation, we need a great awakening. So, whatever comes from the county, I don’t care about that. What I care about is [that] the Gospel, the good news of Jesus Christ, gets out to a hurting and dying world.

McClure also likened his church’s situation to communist countries where dictators “stop religion first,” which appears to have motivated his perseverance through all the discrimination he and his church faced.

For the time being, this is a win for religious liberty. Churches and other conservative leaning organizations are likely to face discrimination as the left continues to push the bounds of its woke, progressive and radical agenda. As evidenced by McClure, persistence and commitment to the cause is the best retaliation.