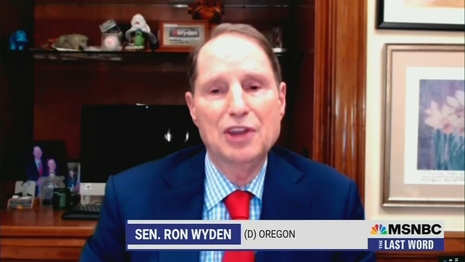 The U.S. 1973 Supreme Court Roe v. Wade ruling is likely to be overturned before the end of the month. We are at a climactic moment in history and abortion activists have been working overtime to push the false narrative that abortion is essential.

According to the brainwashed clan over at Slate, if and likely when Roe is overturned, an issue of “uterus surveillance” will supposedly pose a threat. Senator Ron Wyden (D-Ore.) penned the Slate piece and threw a tantrum about how ending Roe will threaten free speech online. The senator gave three steps in the pro-life "extremist" plan.

Wyden provided no mystery on his pro-abortion stance when he said that “step one in the extremist playbook is making abortion illegal.” Yes, the people who are trying to make the slaughter of innocent children illegal are the extremists. Obviously.

Wyden then claimed that once Roe is overturned, online privacy will be threatened and “step two is preventing pregnant people or health care providers from discussing it online.”

It is no accident that Republican politicians’ efforts to outlaw abortion and exert state control over women’s bodies have moved in tandem with their crusade to provide the government with control over what people can say, write, or teach.

It’s interesting that Wyden thinks that Conservatives are the ones who want to restrict free speech. The Media Research Center’s CensorTrack database has close to 4,000 instances of biased censorship online AGAINST Conservative users. Conservatives push for free speech on a regular basis as we live in a free and open republic, but Wyden persisted.

Overturning Roe won’t push society back to a 1930s version of cultural norms either. It will instead, allow states to dictate which abortion rules and regulations they want to enforce. If anything, this decision would give more power to individual states and is more progressive than the practices of the 30s.

Wyden co-wrote Section 230 of the Communications Decency Act in 1996 and expressed that without it, Republican “extremists” will “ban even the mention of abortion in any forum, anywhere.” He then provided “step three in the reactionary playbook” which he said was “hijacking the digital tools that we depend on in modern life and using them to track down people who get abortions.”

These are the same points Wyden preached last month for an Aspen Institute Zoom lecture. The points did nothing then and nothing now, except show Wyden’s love for abortion.

Throughout the whole piece, Wyden advocated against data leeching from phone apps where data brokers track women’s location and search history for abortion related causes. This is a valid point as we should have a right to privacy. However, consider this: A serial killer goes on a murder crusade and orders tools and supplies online and then travels to victims homes to kill them. Should law enforcement be allowed to use that information to track down the killer? Yes. Same goes for abortion. If women are committing illegal activity, i.e. killing babies in states where it is illegal, they should be in trouble.

Wyden provided his solutions for “uterus surveillance” including bills and laws that would keep illegal activity in secret to help women get away with, well, murder.

If women didn’t break the law, none of these proposals would even be necessary. Start there Sen. Wyden.