I really wish that this piece was satire but it's not. Apparently, playing with white dolls as a black child is racist. 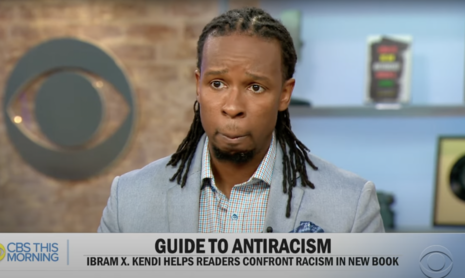 We wondered if our Black child’s attachment to a white doll could mean she had already breathed in what the psychologist Beverly Daniel Tatum has called the ‘smog’ of white superiority.

Oh good Lord.  Notice how in his piece he capitalized the "B" in "black" but was sure to keep the "w" lowercase in "white" ... yet, his baby is the racist one.

Kendi and his wife (or as he refers to her as, his partner) supposedly felt that “an alarm” of “racial prejudice” “was ringing,” when they caught their black daughter playing with a blue eyed, caucasian baby doll at daycare FOUR DAYS IN A ROW. OMG their baby is one-year-old and already super duper racist.

Supposedly the baby loved the white doll so much that she cried when her parents ripped it out of her hands. Albeit because the child wanted to play with the toy … not because she wanted a white doll in particular. After all, the baby was 12-months-old and could probably barely even walk, never mind consider “racial prejudice” when choosing a toy.

After stealing a toy from his baby, Kendi couldn't find “a single doll that looked Asian, Native, Latino, Middle Eastern, or Black” at the daycare and that realization caused him deep grievance. (Of course, deep grievance is his bread and butter, and he's not going to leave one un kvetched over.) “Every single doll I saw looked White. Anger overtook me," he said and then admitted that the lack of black dollies available may have been the contributing factor to his black baby choosing a white baby doll.

Kendi is a prominent critical race theory advocate who writers only about race and sells the myth of systemic racism. Some of his books include: How to Raise an Antiracist, Goodnight Racism, Be Antiracist, and who could forget his New York Times best seller, Antiracist Baby? Money grabbing at its finest.

Kendi is even pushing for CRT to be taught in schools. CRT “is a form of Marxism and an attempt to indoctrinate school children that America is inherently a racist country,” as Fox News reported. Perfect concept for innocent children to learn about.

The thing is, kids aren’t racist until someone that they trust teaches them to be. Same thing goes with trans and gay kids. Kids aren’t gay or trans unless an authority figure tells them to be. This is the indoctrination of the youth.

I mean who knows what the kid was thinking. She was only one-year-old after all, and maybe she did just like the white baby better. Maybe it had a bow or a brighter color dress or perhaps it was just a freaking toy that she wanted to play with and there isn't, in fact, any political agenda behind her choice. To use your kid as a way to push woke progressivism is a new low for leftie dads.