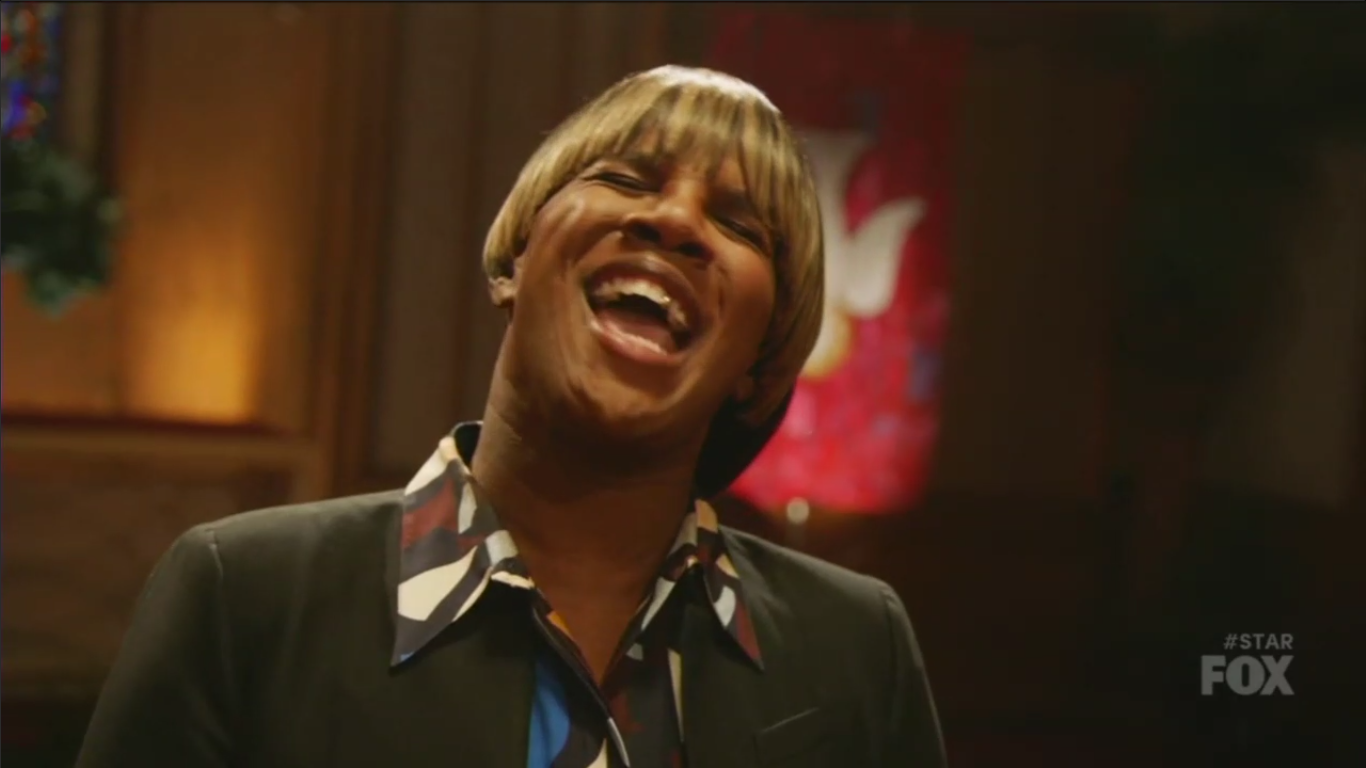 If there’s a theme in Star’s October 31 episode “Someday We’ll All Be Free,” it’s the suffering and healing of the black characters on the show, particularly the gay ones. The suffering of these characters is so righteous, that it is ultimately likened to the suffering of Jesus on the cross, and taken to mean that God has bestowed a special kind of love upon them.

The episode largely revolves around Carlotta Brown (Queen Latifah) who has been reeling from the death of her lover, realizing she needs to seek help so that she can be released from an involuntary stay at the hospital. Carlotta initially fights her stay at the hospital, indignant over a white barista calling the police on her when she fell asleep at a coffee shop, tried to skip out on the bill, and peed herself. “Any time a black woman does anything other than smile, they think she crazy,” she tells her doctor, who is also a black woman.

Carlotta’s hospitalization affects several other characters, namely her genderqueer friend and hairdresser, Miss Bruce (Miss Lawrence). While cutting Bobby’s (Harold Perrineau) hair, Miss Bruce has been reminiscing about how his father, a pastor, reacted, when he came out:

You know, he locked me up like Carlotta when I told him I was gay. Had them folk call me everything but a child of God. Yet, that's exactly what they wanted me to be. You know, Stevie Wonder could see more than church folk.

This storyline of how Christians, particularly members of the clergy, view homosexuals, still rears its ugly head. “Church folk” are also all lumped together as being blind.

By episode’s end, Miss Bruce and Bobby meet at the church where Miss Bruce’s father is a pastor, so that Miss Bruce may find healing like Carlotta and recognize his worth:

Miss Bruce: I’m good. I don’t know why I called you down here.

Bobby: I’m here. So you can stop acting like you don’t need nobody. How you feeling?

Miss Bruce: Stuck. The strongest woman I know found healing today. Now I got to find it, too…This place still looks the same.

Bobby: Yeah, but you not the same.

Miss Bruce: I'd be lying if I said some Sunday morning I don't still hear that little boy's voice in my head... Praying, asking God to make him normal. I wish I can tell him that he was already normal. Not just him. Everybody.

Bobby: Then tell them.

Bobby: He must really love you to make you black and gay.

Miss Bruce: Why do you say that?

Bobby: We're the only ones that come close to suffering like He did.

Miss Bruce: And yet we rise.

Bobby: Yeah, I suppose we do.

Bobby could have reminded Miss Bruce about human dignity and worth, and that he is indeed loved by God. Instead, being black and gay is equated with the suffering Jesus as the Son of God endured during the crucifixion. For any demographic to be loved more or less by God, or to be considered having suffered in the same way in which Jesus did at his death, completely distorts the narrative of what the love of God is about. This includes how Jesus was the one who was sent to suffer and die in such a way.

By speaking about how being "made" black and gay shows Jesus “must really love” a person, and that blacks and gays are in a select group of being “the only ones,” the show doesn't remind of us of how we are all children of God, or seek to unite us as members of that human family. Instead, it focuses on a person’s demographics while hitting at "church folk." If this is supposed to be an episode about realizing the importance of healing and seeking help, Star actually hurts the cause.