In light of the leaked Supreme Court decision that could overturn Roe v. Wade, the pro-aborts have been taking all measures to protect their cherished baby sacrifices. Numerous groups have been engaging in domestic terrorist attacks against pro-life centers, including the left’s favorite "myth,” Antifa.

A Buffalo, New York pregnancy center was firebombed earlier this month which an Antifa group celebrated on Twitter. 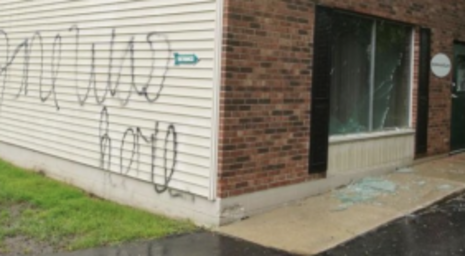 The terrorist group Antifa Sacramento posted a video of the burned-out building’s interior from WGRZ reporter Dave McKinley. The group dubbed the first 17 seconds of ACDC’s song “Thunderstruck” over the footage of the facility's destruction.

"Not sure why, but the first 17 seconds of Thunderstruck goes perfectly with this 17-second video of the aftermath of the firebombing of the anti-Abortion, CompassCare that recently occurred in Buffalo, NY area," Antifa Sacramento tweeted shortly after the attack, with the hashtags "Death To Patriarchy" and "Death To White Supremacy."

The terrorist group continued to boast about the vandalism, tweeting the exterior shot of the building, which had “Jane was here” written on it.

"Solidarity! And Sound on! Here's the aftermath of the firebombing of CompassCare, the anti-abortion center in the Buffalo, NY area!" Antifa Sacramento posted to Twitter hashtags “Death To Patriarchy” and “Jane’s Revenge.”

Radical groups like Jane’s Revenge have already taken credit for numerous attacks against pro-life centers. These terrorists have not only attacked these centers with full credit but have also encouraged other groups to commit violence.

It's clear these terrorists aren't about choice since attacking centers that offer the choice of life is central to their messaging.