Are you comfortable with mentally disturbed men hanging around the kids section of the local library? How do you stand on dudes with 5 o’clock shadow dressed in lingerie reading to five-year-olds? If you’re a Spokane, Washington resident, you better be okay with it, or you’re a “religious extremist,” and just may find yourself sold in effigy at a slave auction to benefit America’s largest abortion mill. 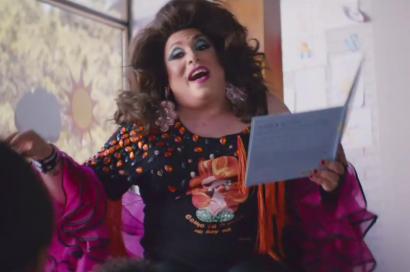 “The cutouts represented the faces of at least six Christian activists and pastors, including Pastors Ken Peters and Afshin Yaghtin, and the founder of 500 Mom Stronger, Anna Bohach.”

It was a “surprise game” that nicely complimented the evening's other entertainment, a “sexually explicit drag show featuring Tirrany Hex (Andrea Tate) the drag queen who read to children at local Spokane libraries,” reported the blogger Activist Mommy.

Just who are these Christian bigots so deserving of this hate from the marginalized heroes of gender confusion? What kind of reprehensible tactics do they employ to destroy women’s rights? Activist Mommy:

They pray and protest Planned Parenthood for their exploitative practices against women and children. These Christians demonstrated against Drag Queen Story Hour sexually exploiting and grooming children. They are successfully exposing and calling attention to Planned Parenthood and the American Library Association’s active attempts to expose children to deviant sexual practices and dangerous gender ideology. These Christians are risking everything to protect children from abortion and vulnerable women from being exploited.

Bohach told CBN “that the group displays hatred toward Christianity and has harassed her and her family.”

Silly Christian. It’s not hate if it comes from the left.