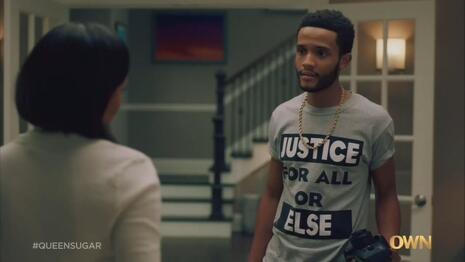 The Oprah Winfrey Network’s (OWN) Queen Sugar, about a black family running a sugar cane farm in rural Louisiana, is back with a vengeance with its take on the George Floyd case. If their view on white men before was any indication, get ready for a lot of lies and racial hatred.

The March 23 episode, titled “May 27, 2020,” recounted the release of the George Floyd video. As expected, nearly every character had an opinion on it, and it all boiled down to alleging that “black men are murdered by police.” Also, as expected, just about everything they say was also buried under lies and propaganda, such as activist Nova (Rutina Wesley) reading a list of those “taken too soon” by the police which includes, of all people, Michael Brown.

Nova also lectured her white cop boyfriend Calvin (Greg Vaughan) on whether he felt “ashamed about what happened to George Floyd” because she said, "When horrible things happen and a Black person is responsible, we feel shame" and "if it were a Black cop who killed him, I feel embarrassed personally."

Then she went on to blame President Trump and "white supremacy," as if Black Lives Matter didn't start under President Obama, and seemed to want whites to feel "personal shame" for what happened:

Nova: When you saw what happened to George Floyd, did you feel shame? It's not a trick question. I'm just curious. It's for my article.

Calvin: I felt disgust, watching a human life being taken. But, no, I wasn't embarrassed by it personally because I had nothing to do with it.

Nova: Right. But if it were a Black cop who killed him, I feel embarrassed personally. I feel shame.

Courtney: But why? You didn't do it.

Nova: Every Black person's actions are seen as a collective endeavor. Every action besides success, of course. Every bad thing that one of us may experience or cause reflects on all of us in the eyes of American society. One robbery, they are inherently criminal. One drug deal, they inherently lack restraint. One person does something trifling on the job, they all lack discipline.

Courtney: I see what you mean. It's like Black people have a collective conscious in the eyes of white America. Like you think and behave as a monolith. But of course, that's, like, so false.

Nova: You have a white man strangling someone by the neck while being recorded, as both victim and bystanders begged him to stop. You all feel no personal shame in that. If the tables were turned, I'd be in shambles. Y'all have an imbecile in the White House and you just shrug it off. If it were Obama, all the Black folks would be hanging our heads.

Calvin: Because all Black Americans would be lumped together because of the mess he was involved in.

Nova: And the mess that's happening with the white man in the Oval now? You don't even feel at all connected to. This is one of the treacherous and rarely discussed side effects of white supremacy.

Considering the media’s recent reaction to the Colorado shooting suspect, I have to say it’s most certainly not just Black people who get painted under the same brush.

It only grew worse with other scenes such as Nova’s brother Ralph (Kofi Siriboe) confronting a cliché white racist who was spouting "All Lives Matter" and that Floyd "got what he deserved." Or Ralph explaining to his son, "We can't say All Lives Matter till they act like Black Lives Matter," and that the police will stop him “because you’re Black” whether or not he does something wrong. Or Ralph’s Aunt Violet (Tina Lifford) arguing with her husband over him buying a gun because “they killed that man dead in the middle of the street.”

While this episode took place in May 2020, we have to assume this episode was filmed well after the initial George Floyd video was released. At that point, the writers probably also learned that George Floyd had a fatal level of fentanyl in his system, that he asked to lie on the ground, and that he was yelling that he couldn’t breathe long before Derek Chauvin’s knee was on him. While that doesn’t excuse every action on the video, it’s a far more complicated picture. Of course, facts never stopped the BLM narrative before.

Nova and Ralph’s sister Charley (Dawn-Lyn Gardner) found her son Micah (Nicholas L. Ashe) in tears remarking how “the murder of Black people is very acceptable.” But the worst response came later from Micah upon learning that protesters burned a Minneapolis police station in reaction to the video. While his mother rightfully argued that riots were dangerous and wrong, Micah fired back “'protest peacefully' are two words that shouldn’t be used together.” He also didn't care if anyone was inside the burning precinct, and as seen by the above photo where he's wearing a "Justice For All Or Else" t-shirt, the show clearly agreed with him:

Micah: So, what do you suppose we fight back with then, huh? Love?

Charley: Don't. Don't do that just because you're angry. Love isn't a weakness. Love isn't something to be mocked. You can be enraged and still lead with love, with light. Ella Baker said, "Give light, and the people will find the way." Dr. King said, you know this, Micah, "Darkness can't drive out darkness. Only light can do that. Hate can't drive out hate. Only love can do that."

Micah: Dr. King also said that a riot is the language of the unheard.

Charley: We have other ways. We have our vote, we can make laws, policies, we can protest peacefully...

Micah: Mom, "Protest peacefully" are two words -that just shouldn't be used together.

Micah: You're talking about working within a system that's designed exactly the way it's been working. Against us.

Charley: All I'm saying is rioting and looting aren't the answer.

Micah: Then what is?

By the end, Charley joined her son in a protest, white people were still to blame, and race relations in the U.S. took several steps back.

This show was sponsored by commercials from Colgate, Dove, and State Farm.