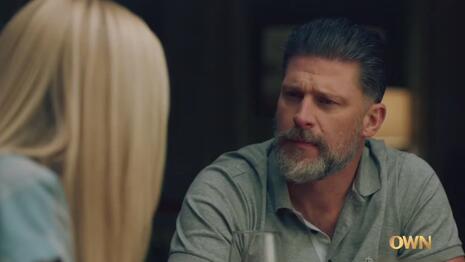 Always remember: when someone tells you who they are, believe them. And the Oprah Winfrey Network’s (OWN) Queen Sugar showed its true self by claiming every white male is a bad guy for the crime of being born.

Queen Sugar is a drama created by BLM activist filmmaker Ava DuVernay about a black family running a sugar cane farm in rural Louisiana. As you might imagine, it often has racial themes.

The March 9 episode “Early-May 2020” has black activist journalist Nova (Rutina Wesley) meeting her white boyfriend Calvin’s (Greg Vaughn) daughter. Considering Nova started dating Calvin when he was still married, she’s right to be a little nervous. However, they quickly get along due to the fact that they both seem to hate Calvin’s ex-wife and apparently both resent Calvin being a "heterosexual cisgendered white male." That becomes clear over a poker game when they get defensive over Calvin using the word “aggressive.”

Courtney: Fourth book in a row.

Calvin: All right, all right.

Courtney: In your face, Dad.

Calvin: All right, all right.

Nova: You’re not used to being owned by your daughter, huh?

Calvin: Listen I am man enough to admit she’s winning. But I didn’t think she’d be so aggressive about it.

Courtney: Did he just call me aggressive?

Nova: I believe he did.

Calvin: Listen, I didn’t mean anything about it.

Courtney: It’s fine. I’m just wondering if you ever said that at poker night with the fellas.

Nova: How is that?

Calvin: Okay when did I become the bad guy?

Courtney: When you were born. Like every other heterosexual cisgendered white male.

Calvin: Wait a minute. “When I was born”? What are they teaching you at this college?

Courtney: I’m just saying, we’re all born into a system. Either works for us or against us. Of course we all have choices we can make, but there’s no such thing as neutrality. These facts bear themselves out in ways big and small. Like your comment about women being too aggressive at a game that is literally meant to be aggressive.

Calvin: Have you been giving her lessons?

Nova: No. But I must say…well said, young lady. Well said.

Accusing someone of being a “bad guy” for being born white is the very definition of racist. This show and various other college students parroting leftist talking points can spin it as many times as they want, but it will always be racist. And claiming we’re born into a system that “works for us or against us” is hardly going to make any of it better.

If Calvin learns anything from this, it should be to take his daughter out of that college as soon as possible. Sadly, I doubt that a channel financed by Oprah Winfrey is going to offer an option to not hate white people. Better prepare for more strong, independent women getting huffy over the word “aggressive.” That’ll unite America.

This show was sponsored by commercials from Geico, T-Mobile, and Target.