‘For All Mankind’ Doubles Down on Sexist NASA: 'Women Can’t Do What We Do'

For All Mankind may be interested in showing us its alternative history, but that’s nothing compared to showing us its propaganda. The Apple TV+ series continues to push its feminist agenda by dragging NASA as male-driven and sexist. What isn’t sexist to TV writers these days? 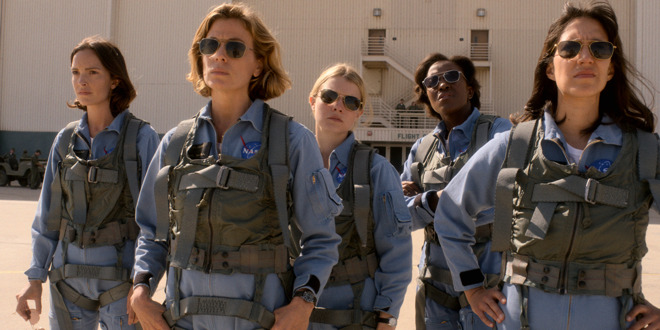 The November 8 episode “Prime Crew” continues where we left off with NASA training female recruits for a new mission to compete with the Soviet Union. Sadly, one of the women dies after a training exercise goes horribly wrong, putting a damper on the entire project. With a death on the roster, many people believe it’s only a matter of time until the program itself is scrapped.

Sure enough, Nixon calls for the female astronaut training to end, telling NASA to once again focus on establishing a moon base to get ahead of Russian cosmonauts. Noted real-life astronaut John Glenn (Matt Battaglia) arrives to encourage project head Deke Slayton (Chris Bauer) to drop the female training. He states that having men be astronauts is just “a fact of our social order,” a reference to Glenn’s real-life opposition to female astronauts. Never mind the fact that John Glenn was the first American to orbit the Earth. It’s apparently more important to remember he was sexist by 2019 standards.

Deke: So, what’s on your mind?

John: Well, the girl that crashed the bedstead.

John: She was out of her depth.

Deke: What makes you say that?

John: There’s a reason that being a test pilot used to be a requirement for this job. Experience actually matters. You have to face the facts, Deke. Men go off and fight wars and fly the planes. Women can’t do what we do. It’s just a fact of our social order.

Deke: I don’t know if you heard, but a woman did land on the moon. They’ve worked hard for this, John. To take it away from them now…

John: Look after what you went through on Mercury, I don’t blame you for having compassion for these ladies. I really don’t.

Deke: This has nothing to do with that.

John: Deke, I’ve known you for a long time. I was there when that moron flight surgeon grounded you for…what'd they call it?

John: You got a raw deal. We're talking about the credibility of NASA here. Everyone knows this wasn't your idea. It was forced on you.

Deke: Nobody forced me into anything. I decide who goes up and who doesn't.

John: I know. And your word carries a lot of weight. If you come out and say that we gave it a good shot and these girls just weren't up to standards, no one's gonna question that. No one.

The rest of the crew don’t fare much better. Against request, Deke continues the training and even places one recruit, Molly Cobb (Sonya Walger) on the next shuttle in place of a man. Her two fellow crewmembers tell her to follow their lead until she reminds them that she has more experience than both of them. “So, in a sense,” she adds. “I have seniority here.” The last thing any show needs is shutting down more “mansplaining.”

The show also adds another twist to the already pandering plot. It turns out Ellen (Jodi Balfour), another female recruit, is secretly a lesbian. She and a male NASA employee fake a relationship to hide their true sexuality from the public. Now, NASA was not only sexist, but homophobic as well.

In this rendering, it appears sending people to the moon is only a secondary task for NASA in the early 1970s. Its first task seems to be upholding sexist, patriarchal ideas. Or, at least, that’s what For All Mankind would have us believe.