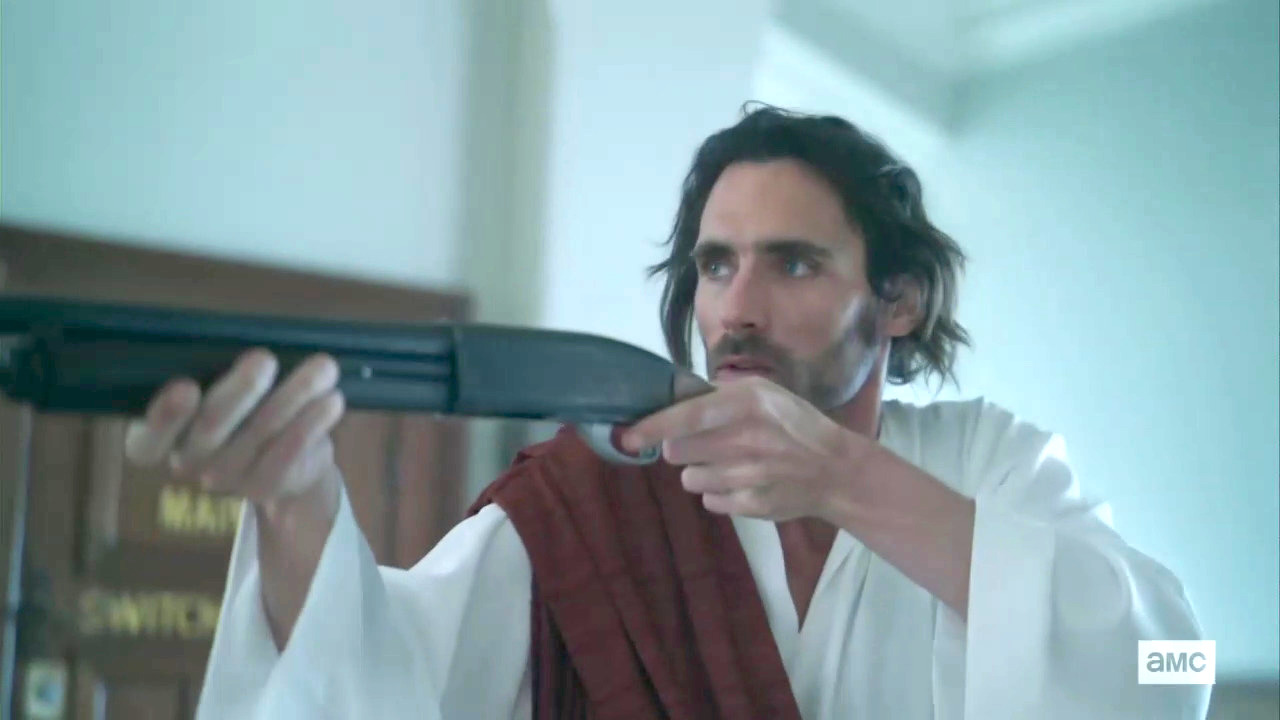 Although making God a villain was already a low point, the final season of AMC’s Preacher branches out to ruin another member of the Holy Trinity with Jesus Christ. How many people think it’s fun to watch Jesus smoking dope and shooting people? By the looks of this episode, far too many. It’s moments like these that make me thankful that Preacher is finally coming to an end soon.

The August 25 episode “Bleak City” follows Tulip (Ruth Negga) on a mission to save her vampire friend Cassidy (Joseph Gilgun) from the evil organization called The Grail. While she finds Cassidy, she also surprisingly runs into none other than Jesus Christ Himself (Tyson Ritter). Although His Father is working with The Grail, Jesus asks to leave with Tulip, and the group escapes The Grail’s clutches with no one being the wiser.

Jesus’ attitude towards going out on the road confuses Tulip and Cassidy but clearly not anyone who watches this show. The Messiah, who previously had sex and fathered a child prior to His death on the cross, is an irresponsible idiot who’s annoyed by His dad’s favoritism of His in-bred descendent. To demonstrate that, we get a scene where Jesus vents his issues over some dope with Tulip.

Jesus: And I was... just that one mistake, you know? That one little sin changed everything.

Jesus: I'm not complaining. You know? A new Messiah was chosen. My son. A better one by all accounts.

Despite those misgivings, Jesus still feels obligated to go back to His Father. Tulip, however, encourages Jesus to travel the world and try whatever He wants. She even jokes that they could rob a bank, leading Jesus to visualize a scenario where they indeed rob a bank. The “hilarious” scene is even topped off with Jesus shooting a civilian.

Nevertheless, Jesus ends up going back to The Grail to respect His Father’s wishes. Those wishes, it turns out, include literally working with Adolf Hitler (Noah Taylor) to help plan out the end of the world in 2020. Even when Jesus is “good,” He’s doing something terrible.

The saddest part about these scenes is that they’re not the worst things done in this show. They’re not even the worst things Jesus has done on this show. What they are is a continuing effort to smear and mock figures of a faith belonging to billions. In 2019, it’s only a wonder why these writers still think it’s funny.