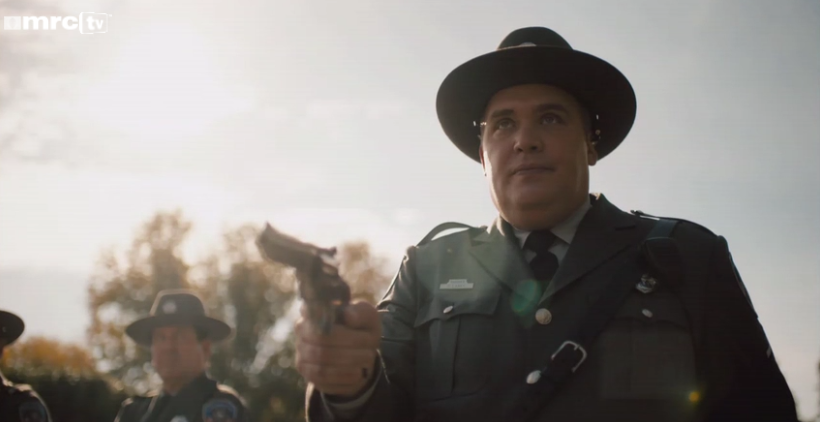 If you thought the profanity was unbearable in The Twilight Zone, you haven’t seen anything yet. The creators of the CBS All-Access revival weren’t shy about adding 2019 politics to the show, and now we have seen their full effort on display. In this case, it’s another perpetuation of the racist cop boogeyman.

The April 11 episode “Replay” follows Nina (Sanaa Lathan) taking her son Dorian (Damson Idris) to his first day at college and documenting the moment on an old camcorder. Along the way, they are harassed and almost pursued by Officer Lasky (Glenn Fleshler) for some innocuous reason. In a few short moments, he begins attacking Dorian for reaching for the camcorder. Before anything deadly happens, however, Nina hits the rewind button and goes back in time.

It turns out that her camcorder can “replay” moments that she records. Nina tries to use this to her advantage, but every time she tries to avoid Officer Lasky, he keeps showing up and persecuting them for no good reason. Each time leads to some harsh confrontation until one finally ends with Lasky shooting Dorian.

Why is Lasky coming after them like this? Well, if we follow the words of Nina’s brother Neil (Steve Harris), it’s simply put: “they always come.” Judging by his prominent Black Lives Matter poster, Neil likely assumes cops hunt black people for sport, and the episode doesn’t correct him. Neil then helps Nina and Dorian finally reach the university only to be confronted by Lasky along with a group of other white male cops, as well. In this final confrontation, Nina boldly faces Lasky and the racist cops. Here is when the episode goes from not subtle to unbearably preachy.

Officer Lasky: You think you can intimidate me with a camcorder? Don’t you watch the news?

Nina: You’ve crossed the line. Harassing us, abusing us. You’ve been profiling us, targeting us, following us, shooting us, killing us. Mhmm, not anymore. Now we cross the line. My son will cross that gate. Right now, right here. My son will go to college. So back the fuck up!

Officer: Come on, Lasky. Let’s get out of here.

Nina: I see it now, Officer Lasky. You’re the one who’s really afraid. Go on Dorian. Walk through that gate.

And I thought The Handmaid’s Tale was delusional about reality! For starters, I actually do watch the news, Officer Lasky, and nearly all of it would condemn the white cop shooter no matter what the circumstances. Second of all, does the series still think we’re in the 1960s? The Twilight Zone, of course, tackled prejudice and even racism in its heyday, but that was back within a decade of when actual African American students had trouble attending schools.

Finally, even as a metaphor, the episode falls flat. The entire premise only works if there is really an epidemic of black teens being shot by cops. The truth is, not even a fraction of a fraction of the black population even faces this problem. As it stands now, not only are more whites and Hispanics shot by police but police are, in fact, more likely to die at the hands of black criminals.

Sadly, that doesn’t stop the series and its fans in Hollywood from stirring up this racial divide. What’s worse is that we’re still only on episode three. One can only imagine what other horrors lie in The Twilight Zone 2019.