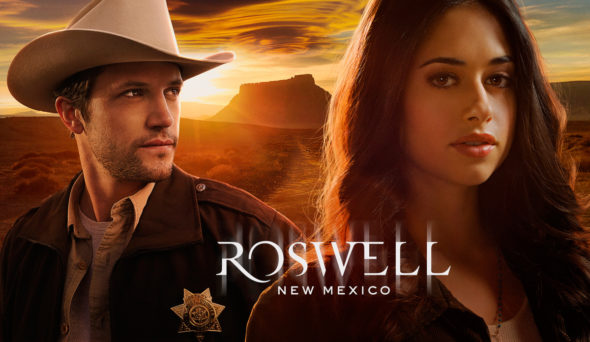 The January 15 pilot follows Liz Ortecho (Jeanine Mason) returning to her hometown of Roswell, New Mexico. Before coming back, she had a thriving career as a biomedical researcher only to see her federal funding pulled because, and this is a real quote, “someone needs money for a wall.” She’s supposed to be a genius, but apparently, she doesn’t know how government funding works. At least congressional Democrats apparently managed to compromise on the wall in the Roswell universe.

The political jabs get so much worse as we learn more about Liz’s family. Very quickly, the episode reveals that Liz’s parents are illegal immigrants who run a diner in the small town. She keeps imploring her father to move to a sanctuary city because she fears him being deported.

Liz: It's late. Are you off the clock?

Arturo: Oh, Carl's wife had her baby. I'm covering his late shift this week. How was the drive?

Liz: Awesome. There's so much nothing to look at between Denver and Roswell. There was an ICE checkpoint on 285, Dad. We can sell the diner, move to a sanctuary city. I need to know you're not gonna get deported.

Liz: I'm already caffeinating. I can cover until closing. I can do it in my sleep. You... rest.

Clearly, we’re supposed to sympathize with the family who is being unfairly judged for being illegal immigrants. What the series can’t do is overcome the fact that this is a man who came to the country illegally while there are plenty of immigrants who followed the law and pay their dues to society. A cute pair of alien antennas won’t change the fact that he broke the law.

References like this are scattered throughout the episode, even in Liz’s reconnection with her high school crush turned police officer Max (Nathan Parsons). She initially runs into him at a sobriety check where she accuses him of racial profiling. Eventually, she apologizes, but he ultimately agrees with her, remarking, “Crime spiked, suits want to blame the undocumented, but tearing families apart, that is not why I joined the force.”

So now police officers along with border patrol officers are the ones ripping children from their parents? That comes as no surprise seeing as people in Roswell also casually joke how they thought Liz had “been deported” after leaving. To keep up the narrative, we have to believe the world is populated with racists who hate people from Mexico, illegal or not.

Sadly, direct references aren’t enough for this show. Remember how the story is supposed to involve actual aliens? The aliens are still there, but now they are used as a not-so-subtle metaphor for illegal immigrants, as well - which is not exactly original. A conspiracy podcaster warns his listeners that aliens will “rape and murder and steal our jobs.” Max, who is revealed to be an alien, defends himself to Liz saying, “We grew up watching movies where aliens abduct people and violate them and blow up the White House. I'm a son. I'm a brother. I'm a cop.” You’d have to be both blind and deaf to not get the propaganda in this series.

The bottom line of the episode is simple: illegal immigrants/aliens are good and we’re racist for thinking otherwise. They really have to push the message because there’s not much else going for the show with its cliched dialogue, stilted acting, and poorly set-up romances (which also includes a gay couple).

Here I thought Supergirl was the most obnoxious SJW-infused series on the CW. Roswell, New Mexico could quickly give the Girl of Steel a run for her money with this start. For the sake of good television, I hope I’m wrong.