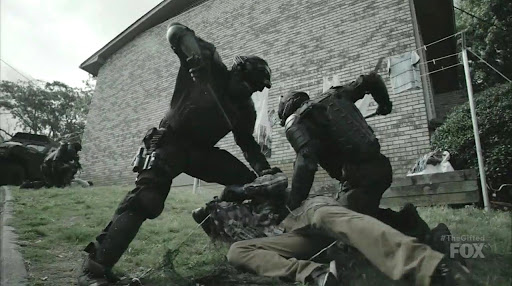 FOX’s The Gifted returned for a second season with the series' most outrageous moment yet. According to the showrunner, some of the bad guys on the show apparently are meant to resemble the Immigrations and Customs Enforcement (ICE) agents. At least that makes my job calling out liberal bias even easier!

The September 25 premiere “eMergence” picks up six months after the previous season. In the series, there are a certain number of people who possess an X-gene, or a genetic mutation that gives them special abilities. Unfortunately, fear of these abilities give rise to anti “mutant” bigotry and prejudice.

As it was in the first season, mutant support is still pretty low, regardless of whether or not a mutant is actually evil. In fact, SWAT-like teams known as Sentinel Services have started to track and hunt innocent mutants in the privacy of their own homes. In a scene that appears ripped out of a liberal fearscape, Sentinel Services proceeds to go on an "ICE raid" against innocent families and mutants, beating their captives and killing unarmed suspected mutants trying to surrender.

For the record, that interpretation doesn’t just come from me but series creator Matt Nix. In an interview with Entertainment Weekly, he stated the scene “sure looks a lot like an ICE [Immigrations and Customs Enforcement] raid.” Even further, he emphasizes, “[T]hat’s another thing that we’ve been exploring over the course of the season, like how is this relevant to our world."

A group of angry, gun-toting thugs attacking and shooting people indiscriminately is relevant to our world? Nix is apparently going so far as to portray ICE as outright evil. In his X-men series, he doesn’t seem to have time to go over the fact that most raids involve illegal immigrants with criminal convictions and are professionally conducted. Somehow those details are always obscured. Fortunately, some of us still care about facts.

The Gifted has always had a political twinge, as does most X-Men material, but this may be one step too far. The show should really stick to writing science-fiction. They haven’t screwed that up yet.