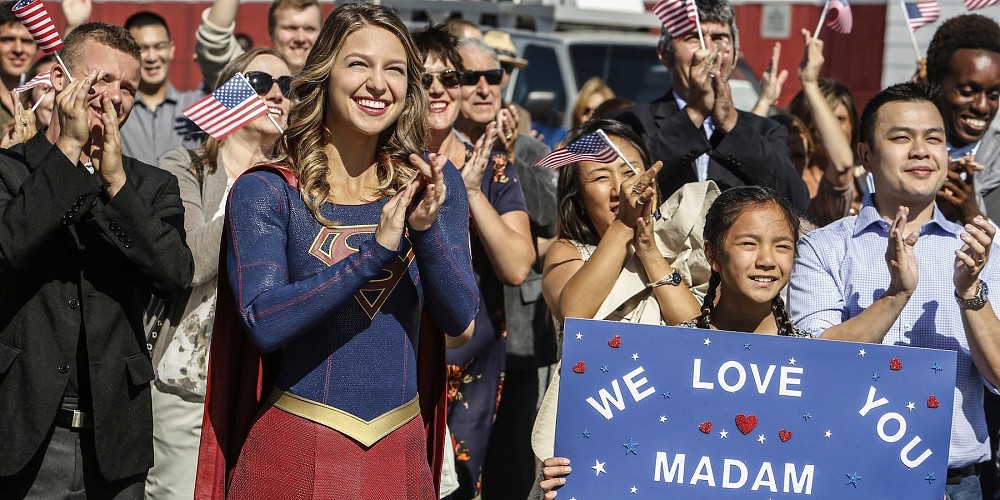 When it was announced that former Wonder Woman Lynda Carter was playing President Olivia Marsdin on season two of Supergirl, I expected not-so-subtle references to a certain not-so-subtle (or honest) presidential candidate Hillary Clinton - and I wasn't disappointed. Not only did she arrive wearing the world’s warmest summer coat like Clinton, this female president also spouted much of the same insane and dangerous rhetoric in the episode “Welcome to Earth.”

If you thought giving amnesty to millions of illegal immigrants in America was crazy, try giving amnesty to ANY alien that shows up on Earth. That’s right. According to the president’s Alien Amnesty Act of 2016, all aliens will be “granted the full rights and privileges of American citizens.” Though the show doesn’t emphasize aliens that land in China, Great Britain, Egypt, or literally any other country but the United States, I guess it includes them as well.

Kara: You wanted to see me, boss?

Snapper Carr: I have your article on Lena Luthor.

Kara: That was some scoop, huh?

Snapper: ''Lena Luthor's stated goal is to repair the damage her brother did to the family name, but by branding an alien detection device with the name 'Luthor,' she has forever tied her company's destiny to that of America's xenophobic right.''

Snapper: ''Though shareholders may delight at the financial prospects of such a device, there is little for a concerned citizen to do but weep at the shameless fear-mongering to the country's immigrant-fearing lowest common denominator."

Kara: I was really proud of that sentence.

Snapper: What the hell is this?

Kara: It's... It's what you wanted. You said you wanted Lena Luthor's take on aliens. Well, here it is. She thinks they should be treated like lepers.

Snapper: I am not questioning the scoop. What I'm questioning is the clear slant in your reporting. If I wanted your opinion on the news, I would have assigned you to op-ed.

Kara: So... So, I shouldn't report truthfully?

Snapper: There is a difference between truthful reporting and bias reporting. This is over-saturated with your pro-alien slant. Facts, Ms. Danvers. Who? What? When? Where? Why?

Kara: But nothing I wrote was inaccurate. That device is bad, objectively bad.

Snapper: That's up for the reader to decide. Rewrite it. Next time, keep your personal feelings to yourself.

Unlike last week’s episode, journalistic integrity is no longer a remarkable virtue to Kara, but a distraction that hides “objective” truths. I guess that’s the excuse other reporters would use to defend injecting their liberal bias into stories as well. Now, if only more editors would nip it in the bud like Snapper.

Kara supports amnesty because she is an alien refugee herself. Forget the fact that Alex remarks that she can count the number of good aliens they know on one hand “with two fingers to spare.” Forget that Supergirl fought off every single one of those endless bad aliens herself. And forget the fact that Kara also shows bias against an emerging Daxamite named Mon-El just because of the planet he came from. This is all about making history, and history doesn’t know common sense, apparently.

Some aliens are bad, but being “xenophobic” and wary of their intentions is worse in this universe.