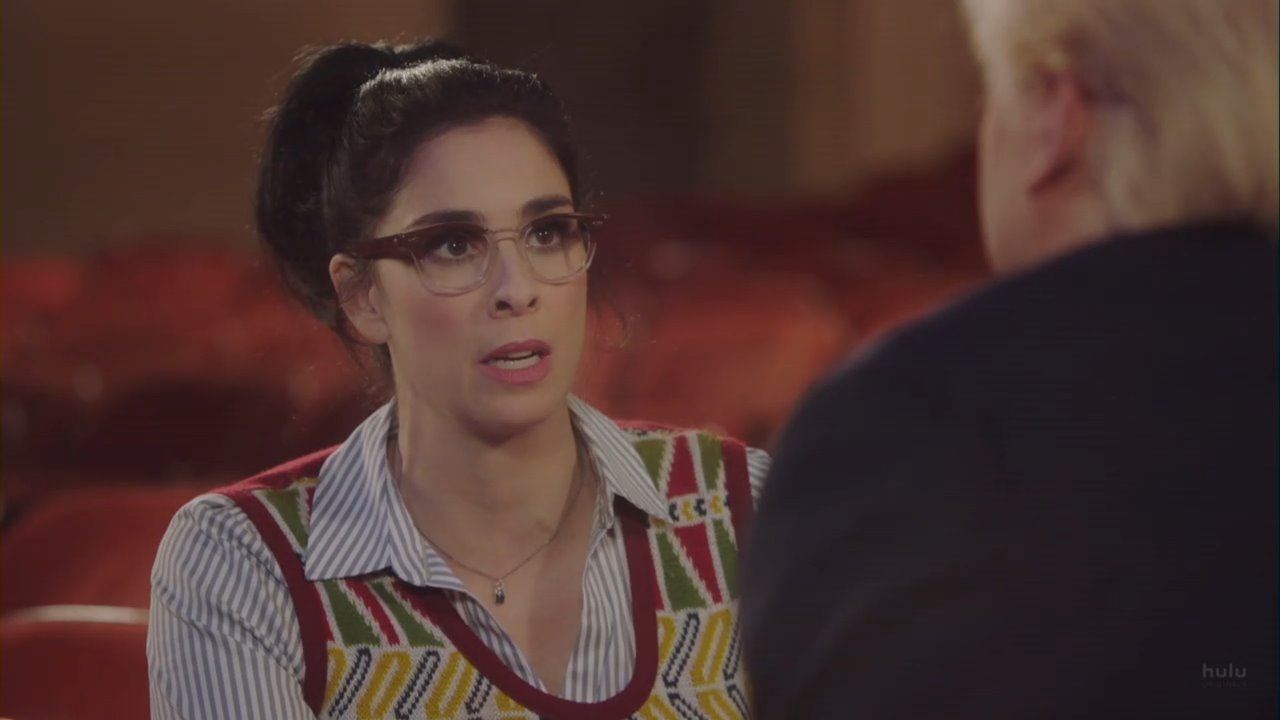 Hulu’s I Love You, America with Sarah Silverman is really pulling out all the stops for its last few episodes this year. After disparaging the GOP, smearing Kavanaugh, and demeaning Jesus Christ, she finally lets out all her feelings regarding "human garbage" Donald Trump - at least until next week. Leftist comedian Bill Maher is also on hand to dub Trump "the worst human."

The November 8 episode sees the third and final part of her big “President Trump” interview. Overall, these segments have mostly consisted of her fake interviewing a Trump impersonator while the impersonator acts like a moron. Somehow this is supposed to be entertaining or informative.

She usually just rolls her eyes at his statements, but at the end of her segment, titled “Return of the Dipshit,” she tells “Trump” what she really thinks of him. Unfortunately, it resembles pretty much everything she's ever said about Trump, such as calling him "human garbage to the core" and claiming he would go to hell, if she believed in hell.

Sarah: Well, I wish I could say it’s been an honor, but it has been an interesting experience. And, um, thank you for…

Trump: Sarah. So great to meet you.

Trump: Wow, incredible. By the way, I got tons of upskirts while we were talking.

Sarah: I think you’re abhorrent, and you break my heart and I think you’re a bad man with no ideology and just human garbage to the core. I just don’t like to think of people that way, but I do think of you that way. And I do believe if there was hell, which there isn’t, you would be going to hell.

Trump: It was great to talk to you, Sarah. A real pleasure. So wonderful.

Trump: There we go. She’s leaving folks. Unbelievable, let me tell you that.

Even without these sketches, we've already gotten the idea that Sarah thinks Trump is a bad person. She has constantly mocked and used every word in the book to insult the president. It’s practically second nature to her beyond saying something about penises. I almost wonder how she had any material before Trump took office.

Still, I have to congratulate Sarah for managing to book someone who hates Republicans and Trump perhaps more than she does. Sure enough, she and Bill Maher discuss a number of topics surrounding the recent midterm elections. It takes Maher barely a minute before he too insults Trump as the “worst human.”

Bill: Well, of course I was saying that to get people to vote, especially the young people. Did you vote? But the truth is we postponed doomsday for a while. You, I thought, gave a very cogent reason to be optimist. Let me just present the other side, so that they hear both. Because I think optimism is very dangerous in the era of Trump. The Democrats did take the House, that’s good, of course, but I mean considering that it’s an election about Trump, not only maybe the worst president but probably the worst human I’ve known, ever seen on the stage. They did what has happened before in midterm elections. Not the first time it flipped the script, you know, so I was hoping we would do better. I was hoping we'd win the Senate. I gave a rather large donation for that which, of course, didn't really pay off.

Sarah: Do they give you money back when that doesn't happen or?

Bill: Fuck no. But I got a nice call from Chuck Schumer, so that was worth the million dollars.

Is there any comedian nowadays who can talk about Donald Trump without saying he’s the worst thing that ever existed? Maher and Silverman whine about extremist Republicans, but they apparently think calling the president “human garbage” is moderate. Laughably, they suggest candidates like Eric Holder, Kamala Harris, and Beto O’Rourke in 2020. At this point, neither one of them would recognize the word “moderate” if they were handed a dictionary.

The midterms were inevitably featured in her show, seeing as they occurred less than three days ago. Her opening “quickie” alone also referenced the results of this election. Mostly, she boasts about the new politicians in office including more women, two Muslims, and an openly gay man, otherwise known as “a grab-bag of Republican worst nightmares.” Sure, the Republicans still have control of the Senate, but she’s more excited to see “badass” Beto O’Rourke in the spotlight. I don’t think I’ve ever seen her hold a non-liberal opinion since this show started.

Then there was her monologue where she tackles the supposedly racist police system which she claims is made up of “white people protectors.” She seriously claims that “[e]verything about our justice system is uniquely designed to punish minorities and poor people.” Of course, she doesn’t provide an alternative to this justice system or acknowledge that perhaps most people in jail, poor, minority, or otherwise, have committed a crime. Moreover, she says it won’t change since “punishing minorities for doing something old white men make money off of” is practically the “GOP platform.” Remember, she still thinks Republicans are the extreme ones here.

It’s such a shame that whenever she’s not mercilessly mocking Trump she’s peddling blatant partisanship and paranoia. She would have been bad enough just picking one.