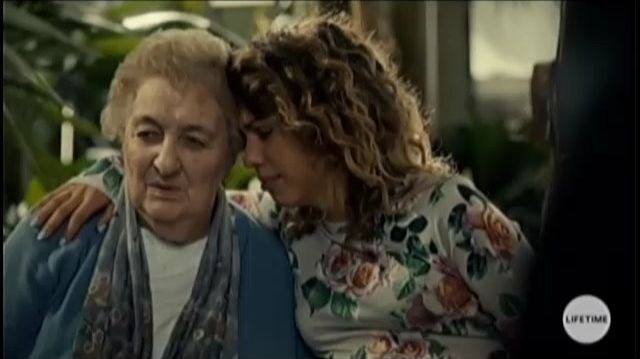 Lifetime’s Mary Kills People has been a nonstop parade of worshipping death over life. Now that we’ve reached the second season finale, it seems they’ve saved the worst for last. Death might be a party according to these people, but there is nothing joyful that comes from this latest killing.

The two-hour April 9 finale kicks us off with episode “Come to Jesus” where Mary (Caroline Dhavernas) and her partner Des (Richard Short) help out Des’s old (and now pregnant) girlfriend Larissa (Jess Salguiero) with a particular patient, namely her 81-year-old grandmother. Apparently, her kidneys are failing, and she is too old to have a transplant which means she’s beginning to suffer. Put simply, Larissa states, “She wants it to stop.”

What then follows is a most disturbing scene of a death that Des later calls “perfect.” A blind and elderly grandmother sits among a beautiful garden sitting next to her pregnant granddaughter reminiscing about missing the world around her. Despite Larissa's tears and the impending birth of her child, this will be the spot and the moment where the old woman's life will end.

Mary: I hear this is your favorite place to visit, Beth.

Beth: I may be blind, but I know the rhododendrons are in bloom. And outside, the maple trees are turning Orange. And I can smell the last of the summer geraniums. Being in here is like being part of the world again. And I miss the world. If it wasn't for this one here, I would've said good-bye a long time ago.

Larissa: I can't believe this little guy isn't gonna get to meet you.

Beth: You'll keep me alive in your stories.

Larissa: [Softly] I don't want you to go.

This scene right here is probably the best summary of why this show is awful. It treats the euthanasia of a grandmother in the arms of her beloved granddaughter who is pregnant with her great grandchild as anything other than the unnatural and disturbing death it truly is. Even worse, they try to paint it as beautiful with the two surrounded by flowers and lovingly embracing as the music swells in the background. It’s almost as if the unlawful killing is an afterthought to these people or that maybe dressing it up can make the ugliness go away.

The previous season gave us something similar in presenting a 15-year-old assisting in his mother’s suicide, but with the additional of an unborn child in the moment, this one hits rock bottom. While a pregnancy normally symbolizes new life, the only thing celebrated on this show, or even this series, is death. After all, life doesn't matter enough to keep living, so why should an unborn life matter at all? Larissa's baby is clearly not enough to keep her grandmother alive, so nothing is sacred. This is a terrible mindset to present to those suffering physically and mentally, and yet the show celebrates that as a "choice."

Meanwhile, the second part, “Fatal Flaw,” presents something only slightly less unsettling. Last week, the show only described death like a party, but this episode actually delivered on a death party. A sickly theater man decides to hold a ceremony near a forest surrounded by his loved ones to honor his chosen death. What’s good enough for an ailing grandmother is good enough for him, I suppose, but once again, no amount of music, feel-good attitude, or décor can change the fact that Mary is killing people. That cannot be changed, and it is far from acceptable.

Unfortunately, it doesn’t look like the party will stop that soon. By the end of the finale, Mary begins plans on opening her own facility, a place where people can come for their deaths instead of her seeking them out individually. After all, this noble cause needs to expand to “help” as many people as possible, no matter the circumstances.

I almost can’t even muster the emotion to be angry anymore, just disappointed. I pity any real-life people who see things this way and pray for a peaceful intercession soon. It is much better than the alternative.