'Scandal' Hypes 'Most Progressive' GOP President...Except She 'Loves Her Guns' 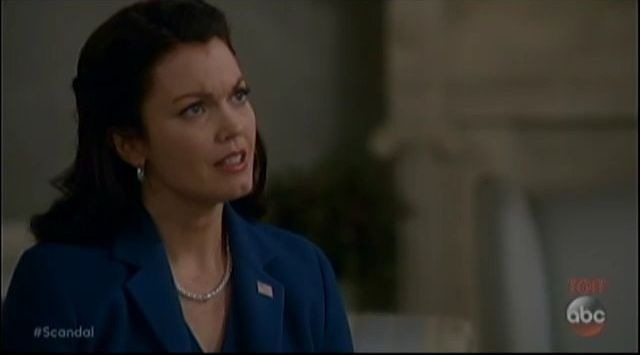 Man, ABC’s Scandal really does not like guns, or "semiautomatic killing machines," as they're called. They also really don't understand guns, gun owners or the Republican Party, but none of that is really news at this point. The latest episode just reinforces those facts with this one critique of the "most progressive Republican" in the modern White House: The woman just "loves her guns" too much.

The March 29 episode “The Noise” continues a shocking new development where Vice President Cyrus Beene (Jeff Perry) is plotting a scheme to oust President Mellie Grant (Bellamy Young) from the White House. The plot thickens when Cyrus frames one of Olivia’s (Kerry Washington) confidants for a recent plane hijacking to try and force the team’s hand. On the legal side, people begin to side with Cyrus either under duress or for their own political gain.

Special Prosecutor Lonnie Mencken (Michael O’Neill), however, admits the real reason he's on the take for Cyrus. In true Scandal fashion, it’s high on drama and low on reality.

Lonnie: A very disturbed young man -- someone who shouldn't even have been walking the streets in the first place -- once entered a superstore and legally purchased half a dozen semiautomatic killing machines. A week later, I was with my boy in the mall. He was picking out presents for his birthday. That same young man was there. My boy was shot twice -- once in the abdomen, once in the chest, puncturing his lung. I told him he'd be okay, even as he was drowning in his own blood. The very last words I said to my son were a lie.

David: Is that what this is about? Adam?

Lonnie: Mellie Grant may be the most progressive Republican we've had in office in a century. She's pro-choice, pro-immigration, she got free college passed, for crying out loud. But in one way, she's exactly like the rest. Mellie loves her guns.

This is the third time in two months that the series has brought up how supposedly easy it is to purchase a gun at a "superstore." Even though gun violence overall is still on the decline, we keep seeing the same lies over and over again to push more gun control that wouldn’t have stopped the shootings in the first place. Because, as we keep reminding these shows, criminals do not follow laws and, as was made clear with the Parkland school shooting, the laws and protections we have in place now to prevent "very disturbed young [men]" from getting guns aren't being fully enforced or utilized.

Sadly, guns seems to be President Mellie Grant’s only policy flaw in the eyes of this special prosecutor. The first female president supports Planned Parenthood, offered free college tuition, but supports the Second Amendment which means she has to go, apparently. The only think shocking at this point is how she can still be labeled a Republican at all, she is the very definition of RINO. Mellie is just what Scandal believes Republicans should be: exactly like Democrats - they wish real Republicans didn't exist at all.

Scandal is proving to be just as dishonest and biased in its final season as ever, and their left-wing agenda has never been more clear. Thankfully this Shonda Rhimes fantasy of a Washington without conservative Republicans will be over soon.