FX’s Snowfall has finally come to its season finale, and it honestly couldn’t get here fast enough for me. The long, drawn-out stories of characters making down-right awful choices has never been a turn-on for me, and ten episodes is ten too many. The final insult comes from one last jab at former President Ronald Reagan. 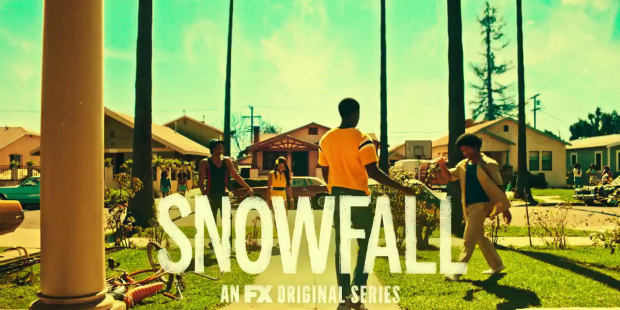 The September 6 finale “The Rubicon” ends…pretty much where everyone started, now that I think about it. Franklin (Damson Idris) continues to help sell cocaine with his friends, the dealers try to overcome each other, and Teddy (Carter Hudson), the CIA agent, continues to push cocaine deals for the United States government to pay for Nicaraguan Contras because that conspiracy has yet to die. This episode, however, does offer one unique twist: President Ronald Reagan approving of Teddy’s work.

After a harrowing experience involving a murder, Teddy only now stops to think maybe dealing illegal substances is a bad idea. Fortunately, his colleague meets with him to discuss the impact of his work. When Teddy starts to have doubts, it becomes the perfect time to bring up just exactly who appreciates his work.

James: I didn't know you were a classical fan. Who was that? Chopin?

Teddy: James, I don't think I'm the guy for this.

James: I went to bat for you, Teddy. I'm sorry. Want my advice? You need to learn to let things go. I mean, come on, this is just like Tehran all over again. Sometimes shit just goes wrong in our business.

Teddy: I could've prevented Tehran. I could've. I should've pulled my agent out. I knew he was in trouble, and nobody would listen.

James: What does it matter? It happened. It wasn't your fault. But you came back to D.C. Wound way too tight, and you took a samurai sword into the country coordinator's office.

Teddy: It was a Civil War saber. I don't understand. I thought that you'd be relieved that I'm out of this.

James: The director's very proud of you. You know, money and supplies are flowing south. Contra fighters are back on the offensive. This thing is starting to work just like you knew it would. He's extremely pleased. So is the President.

Teddy: You're full of shit.

James: He asked us to, uh, pass on his appreciation to the responsible parties.

Teddy: When I was eight, my dad took me to the White House where he was being honored for his service, and we had lunch, and I met Kennedy, and... That was the proudest moment of his whole life. I mean, it's in my file. I know you read it.

James: Look, I am not manipulating you, Teddy. I am just passing on the, uh, sentiment. This is working. Okay, but the question is it gonna keep working because of you, or do I need to find somebody else?

Sure enough, Teddy is right back to making deals with criminals for the government by the end of the episode, because, hey, Reagan thinks it’s okay. With President Reagan as the target (sometimes literally) of this conspiracy, I’m almost surprised the show never went full tin-foil hat to believe he wanted to exterminate the black population like some believe. But I guess that’s what a second season is for.

One would hope the show wouldn't take conspiracy theories or Reagan-bashing too far in a new season, but after what we've just seen, there's no telling how far the show will go now.