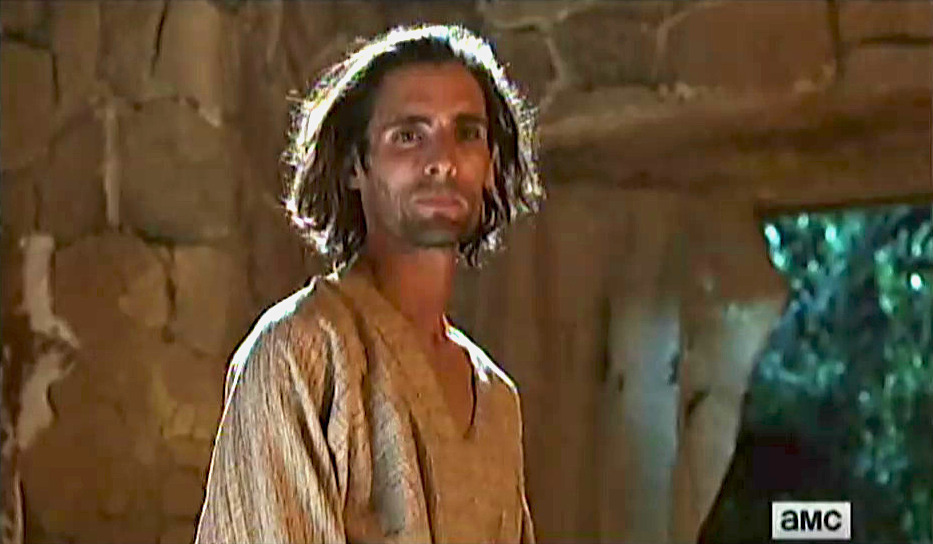 Let’s offer some congratulations to AMC’s Preacher for giving me the fastest, most efficient subject for an article yet. The latest episode featured a subject so embarrassingly crass that I’m shocked I got through the entire episode without slamming my head against a wall. It only takes three simple words: Jesus having sex.

The August 21 episode “Dirty Little Secret” adds a new wrinkle to Jesse Custer’s (Dominic Cooper) search for God as he eventually crosses paths with the religious organization known as The Grail.

But before we get into the plot, the show decides to spend its first five minutes depicting Jesus Christ having gratuitous sex with a married woman the night he is arrested in the Garden of Gethsemane. And when I say gratuitous, I mean gratuitous! They are shown moaning and screaming in multiple positions and the woman asks Jesus, "Could you just stick your finger in my..." So, so, so wrong!

After the marathon sex session, Jesus admits he was a virgin and then gets ready to leave, subtly referencing the Last Supper and upcoming crucifixion.

Woman: You won't stay for supper?

Woman: In the middle of the night?

Jesus: I made him a promise. Tonight meant a lot to me. And no matter what happens, I want you to remember one thing. I love you.

Jesus: Y-you -- And also... You can never, ever tell anyone about this. Cool?

Disciple: Jesus! Jesus, are you in there?!

Disciple: Where the hell have you been? We've been worried sick. You said you were going to the garden to pray.

Jesus: Yeah. I was in the garden. You guys were passed out, so I came here... to bless this ailing woman.

Disciple: The Chief Priests are on the warpath. We gotta move.

Disciple: No, I will not chill. They wanna kill you, man.

Jesus: Blessed are they who are persecuted for the sake of righteousness, for theirs is the kingdom of Heaven.

Disciple: The hell does that even mean, man?

Disciple: Come on. Judas is meeting us at midnight with the getaway donkeys.

Jesus: It's been real.

I do not remember that piece of history in Matthew, Mark, Luke, or John, either. Nor do I ever recall the passage where Jesus uttered the words “chill, bro.” If I didn’t already despise Preacher for showing me a Jesus sex scene, I would have tossed them into a pit for that moment alone. But it’s not like the show even pretended to care what was in the Bible besides ingredients for a decent joint.

A previous episode already revealed the existence of a group that protects a descendant of Jesus Christ, so I suppose in the writers’ depraved heads it only makes sense to show how that happened. After all, it helps satisfies their craving to sully one of the world’s largest religions and tick off people like me.

It’s times like these that actually have me wonder why shows never think to touch on Islam since they do have a prophet who was more than a little promiscuous - Ok, I don't really wonder why. That show would practically write itself, but it would require equal opportunity religious scorn, just about the only equality liberals don’t stand for.

But wait! There’s more! The show continues to follow its graphic novel origins by portraying the Messiah descendant of Jesus as a mentally handicapped result of inbreeding. Yes, even in their backwards interpretation of a major religion we can’t have a speck of dignity in religion. The only purpose it seems to serve anymore is for shock value when Jesse sees him.

Herr Starr: Jesse... This is the Christ Child. The Holy bloodline. Our most precious figurehead. The Messiah. Look upon him.

Jesse: I... I don't know what to say. I'm just a humble s-- This power, I think I've been given it to find your Father -- God. Tell me, am I on the right path? All I ever wanted was to serve you. Please. I don't even know what to call you.

Herr Starr: We call him... Humperdoo.

Herr Starr: Ah. He likes you.

Humperdoo: Hello. Nice to meet yous. Is so happy to see yous.

Jesse: Who the hell is this?

Herr Starr: I told you. This is The Messiah -- Humperdoo.

Har-dee-har. I’m sorry, but at this point, these jabs aren’t funny. Not even satirically. It’s like making fun of Trump’s hair or Republicans being the party of rich, white men. Those jokes are no longer new, relevant, or even close to original. All we have left is the basest form of contempt disguised as something funny, and it’s only getting worse.

But that’s just what Preacher does. Anything connected to Christianity is fair game for mocking or outright hostility. I can’t speak for anyone tired of me writing about it, but I am getting sick and tired of seeing it.