Veterans should be some of our most honored citizens, but ongoing scandals at the Department of Veterans Affairs punish those who give us the most. Though the liberal media would prefer us to forget this issue from the Obama administration, CBS’s NCIS: Los Angeles places VA corruption front-and-center in their latest episode, "Battle Scars."

On the April 23 episode, Hetty’s (Linda Hunt) old veteran friend Charles Langston (Carl Lumbly) kidnaps a Veterans Affairs administrator during a traffic jam. Though the crime forces the team to investigate, they find that the administrator might not be such an innocent victim - straight from a VA worker herself.

Receptionist: I'm not a monster. I don't like turning veterans away. I'm a veteran myself, but, you know, just like in the service, you follow directives. Even when you think the ones giving them are fools.

Kensi: Yeah, I understand that. What else can you tell us about your boss, Bryant?

Receptionist: Did you find him yet?

Receptionist: Let's just say that part of me hopes you don't. Bryant didn't come here to fix things. If anything, he's benefiting from all this endless red tape.

Receptionist: Okay, we've been tasked with increasing patient intake while also reducing wait times. All the records say that we're meeting our goals, but I'm here to tell you we're not even close.

Kensi: So you think he's cooking the books?

Receptionist: Yeah. And making a nice bonus for himself, for a job well done.

Deeks: The, uh, the guy that made the scene, has he been in here before?

Kensi: All right. We have to speak to a few more administrators, but if you think of anything, please don't hesitate to call. Okay?

Receptionist: Hey, I remember you. You were injured. You were in here. (Laughs softly) I'm glad to see you're better.

Receptionist: You know, that's all we want here. To make people better. Just wouldn't think it would be so hard. 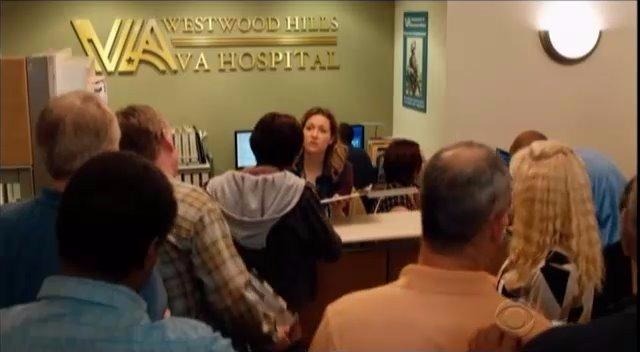 Long lines at centers, rejection of care, and records being fixed sounds all too familiar. While the corrupt administrator in this case eventually receives his comeuppance, plenty of real life administrators go unpunished. And while there are plenty of people who only want “to make people better” in the VA, there are too many issues and red tape that make it almost impossible.

It’s unfortunate that the plight many veterans face when receiving care isn’t as fictional as the events on NCIS: Los Angeles, but the act of gaming the system is a very real issue plaguing our country. What’s worse is that this inefficiency has led to the deaths of veterans forced to wait for care that never came. President Obama himself at the time the scandal was initially revealed seemed slow to act, claiming that “whatever is wrong” might be “just an episodic problem” rather than ongoing corruption.

Fortunately, shows like this can remind others of the problem President Obama was reluctant to name and the even more troubling prospect of nation-wide government run health care. Unless there are more people aware of these problems, long lines, no care, and corrupt health officers may harm all of us.