ABC's show Blackish likes to focus on black issues as if it has authority to speak for every single black person in America. But every so often, they like to touch on other social issues, like gay wedding cakes. How lucky we are to have Blackish to show us these important views!

In Wednesday's episode “The Name Game,” Dre (Anthony Anderson) and Bow (Tracee Ellis Ross) attempt to buy a gender reveal cake for a party to celebrate their fifth kid. When going through the awkward motions of trying to voice what they want, they soon hit a (totally unnecessary) bump in the road that offends their liberal sensibilities: the bakery won’t do gay wedding cakes.

Dre: There's only one thing more exciting than learning the sex of your baby... I got it! I have it. [ Chuckles ] Uh-huh. ...And that's learning it through cake. [ Giggles ]

Bow: We have a kind of weird request. Depending on what is inside this envelope, we want you to make a special cake that's either blue or pink on the inside –

Dre: Come on, Bow. Get to the point, all right? We need a sex cake.

Bow: Uh, no, no, no, no. We're not perverts. We are just having a party to reveal the gender of our baby.

Cashier 1: Yeah, we do them all the time. 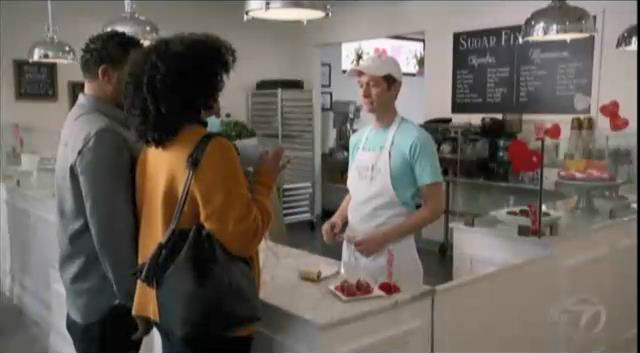 Cashier 1: Yes. Oh, yeah, we can bake any kind of cake you want. Oh! Just as long as it's not for a gay wedding.

Dre: Come on, Bow... All right, before I do this, You don't discriminate against people based on race, gender, or sexual orientation, do you?

Bow: Ah. I can live with that.

Hmmm, so apparently it's ok to discriminate against people for who they are (French-Canadian) but not what they choose to do (go against the biblical form of marriage.) Also, stealing because you don't like someone's closely held beliefs is ok, too.

I wonder if it surprises some liberals to know that rogue Christian bakers aren’t just lurking around dark alleys to not sell cakes to gay couples (the horror!), they just want to make a living without the government forcing them to violate their religious beliefs under penalty of lengthy and expensive lawsuits or hefty fines.

At least the episode took the radical position that private business owners can serve or not serve whomever they like with customers free to simply take their business elsewhere. Hey, maybe people CAN learn something from this show after all.