Christianity points to the cross as the epitome of love: a total gift of self-sacrifice in order to save others. But a new magazine op-ed is arguing the opposite: that love is about looking out for me, myself, and I.

For Mother’s Day, Glamour published an opinion piece on May 11 with the headline, “How Motherhood Made Me a Better Abortion Provider.” Abortionist Ghazaleh Moayedi, an OB/GYN and Physicians for Reproductive Health fellow, argued that motherhood brought her to the conclusion that abortion is an “act of love.” 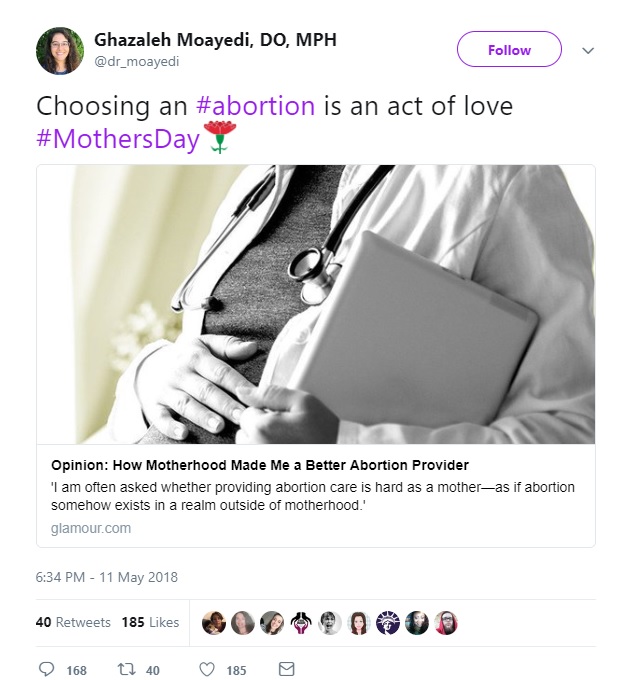 In the piece, Moayedi complained that there are no Mother’s Day cards that “celebrate abortion.” Instead, there are only cards to “celebrate giving hugs, wiping noses, and kissing boo-boos” or “actions that are seen as the core of how a mother expresses love for her children.”

But abortion was just as loving, she protested.

“For my patients that were already parenting, I feel the deep love they had both for the children they had and for the pregnancies they were ending,” she insisted. “Choosing an abortion is an act of love.” 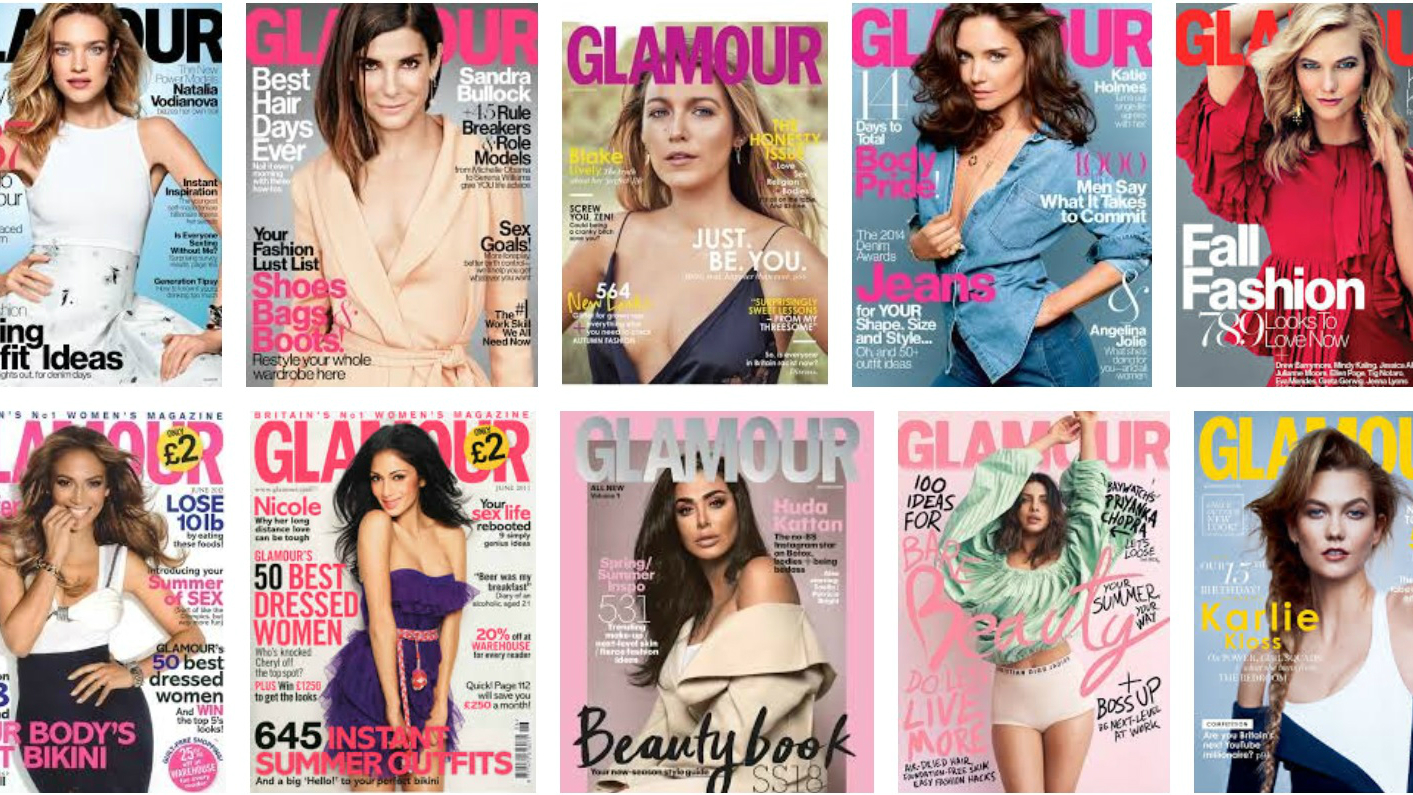 A “deep love” that they had “for the pregnancies they were ending.” Let that phrase sink in. And for women who didn’t yet have kids (except for their unborn baby), Moayedi wrote that abortions are actually a part of motherhood.

“For my patients who were not parents, and did not want to be at that moment, or who never want to be a parent, I recognize their abortions as an act of intentional motherhood,” she wrote.

She opened her story by recalling how she told a colleague that “nothing’s going to change,” after finding out that she herself was pregnant. But something did change after she gave birth: she became more committed to abortion. She wrote:

“I am often asked whether providing abortion care is hard as a mother—as if abortion somehow exists in a realm outside of motherhood. But motherhood is not an accidental or natural job; motherhood is a job done with intention. Holding my baby’s tiny hands in my own not only strengthened my commitment to providing compassionate abortion care but also exposed how I needed to commit to supporting mothers in all aspects of my care.”

She finished her piece by remembering one patient who came for her abortion accompanied by her “two small children.”

“As I finished the five-minute abortion procedure, we laughed about motherhood as her other child watched videos on my phone,” she said. “We laughed about how demanding and obstinate toddlers can be, about the tribulations of potty training, and about how absolutely strange that ‘Daddy Finger’ song is.”

“Becoming a mother,” she concluded, “fundamentally changed everything.”

Sure sounds like it did. Laughing about motherhood while performing an abortion isn’t something that comes naturally to many. Then again, Moayedi does some odd things on Twitter, like post pictures of herself teaching medical students about abortion by performing a simulation of uterine aspiration (sucking out baby bits from the uterus) with papayas. 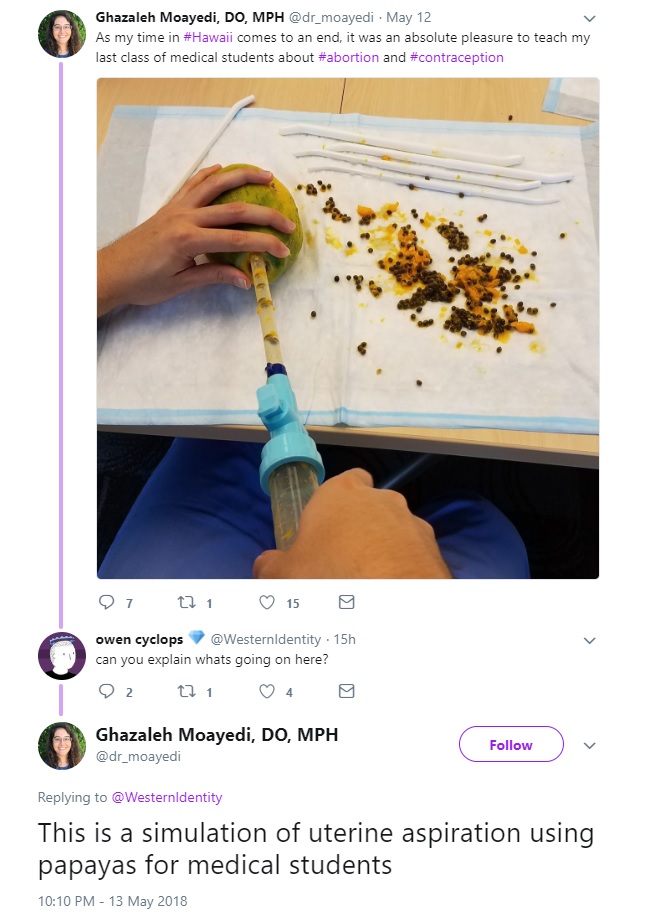 Or that time when wrote a Valentine’s Day poem about performing an abortion with a flashlight because the power went out: 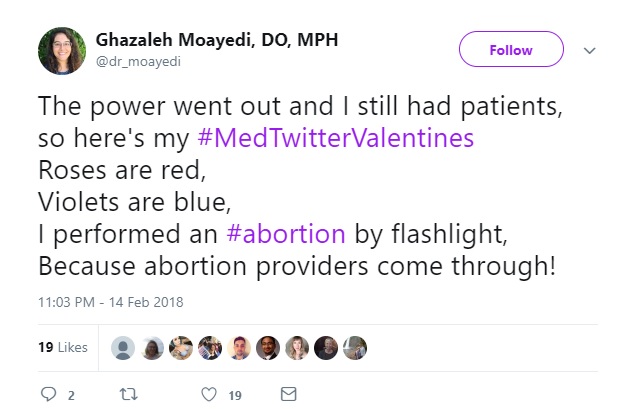 But for all her speaking out, Moayedi didn’t say a word about women who regret their abortions.