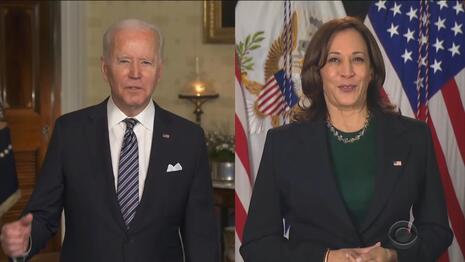 The opening by Biden and Harris was truly cringeworthy. The first sentence out of Biden’s mouth was that he is a lifetime member of the NAACP. He then introduced Harris who launched into a boast of the accomplishments of the Biden administration.

Joe Biden: Good evening, everybody, it's an honor to be a part of the special evening as a lifetime member of the NAACP. And to you Derek for the outstanding leadership of this organization, for more than 100 years the NAACP has advanced essential motion in a central motion that everyone is created equal and is going to be treated equally. And it has for more than 50 years, NAACP Awards help us see exactly that. Black culture is American culture. Black history is American history. And black stories are essential to the ongoing story of America. Tonight's nominees, to all of you, thank you for also helping us see what America can be. And I am honored to introduce someone who has done just that. Our Vice President of the United States Kamala Harris.

Kamala Harris: Thank you, Mr. President. The NAACP Image Awards are about black excellence in motion pictures and television, music, and literature. And over the past year, we have seen so many actors and artists excel not just in their craft, but in their contributions to our community during this devastating pandemic. And the NAACP has led the way all the way fighting for justice, ensuring the well-being of black community, providing grants to black entrepreneurs and advocating for black students. I thank you. As a nation, we are at a major turning point. We have surpassed 100 million shots in arms. We have sent out more than 100 million checks, and we are making historic investments in schools, small businesses, and black communities across the country. And still, there is so much more to be done. So tonight, let us celebrate, and tomorrow, let's get back to work.

Biden and Harris: Welcome to the 52nd Annual NAACP Awards.

Blackish star Anthony Anderson served as the host once again. He described Biden and Harris as “Joe, the wise old grandpa” and Kamala as “the hip auntie” after he said he “loves their dynamic”. Cringeworthy, like I said. Another political reference by Anderson was when he showed his astonishment that a black man was elected to the U.S. Senate from Georgia – Democrat Senator Raphael Warnock. “Look, I’m not going to lie. Even I thought we did something shady,” he said. Apparently, alleged voter fraud is funny to him.

The inaugural Social Justice Impact Award was given to Stacey Abrams. Michelle Obama presented it to her, virtually, as she did a rundown of Abrams’ life. Anthony Anderson introduced Obama by calling her “our forever First Lady” and Obama said Abrams is "a woman who inspires us all." They managed to tip-toed around her election conspiracy theories and refusal to concede the 2018 governor's race.

LeBron James won the President’s Award. NAACP President and CEO Derrick Johnson spoke of LeBron’s charity work and activism. He applauded him for “not just shutting up and dribbling.” LeBron’s “More Than A Vote” voter initiative was highlighted. He said it fights against those who want to “take away our right to be heard.” His work with school children was also a focus of praise to him.

It is striking that with the change of president, suddenly award shows are almost downright boring. The screams and cursing from celebrities against the bad Orange Man and Republicans have vanished, now, instead, the current occupants of the White House are included and celebrated in the festivities. Award recipients stick to thanking those that should be thanked and the show moves along. The next four years of award shows will likely look nothing like the last four years.