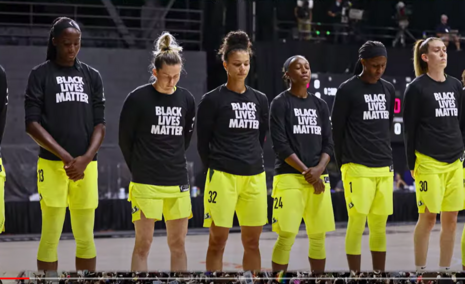 USA Today’s Chris Bumbaca hyped the campaign, stating, “With no federal election on the calendar in 2021, More Than A Vote — the voting rights organization comprised of Black athletes and artists — wasn’t simply going to sit on the sidelines."

The NBA's All-Star weekend in Atlanta is their perfect time and place to politicize elections. Not to showcase basketball's all-stars.

The video featuring James’ voice (and WNBA players in BLM shirts in above photo) is titled “You With Us?” It comes during a week when Swedish soccer superstar Zlatan Ibrahimović twice urged him to cut the politics and stick to sports.

More Than A Vote promised to remain proactive in Georgia, where, according to the partial Bumbaca “the state legislature has already proposed legislation to limit voting options, and announced a partnership with the NBA, Players’ Association and Georgia NAACP to highlight these issues throughout the weekend.”

Today More Than A Vote officially kicked off a national campaign by launching the “Protect Our Power” effort focusing on criminal justice reform, local elections and redistricting.

Following is the text of James’ video remarks, along with descriptions of some of the corresponding images in parenthesis:

“Look what we did. (Peaceful BLM protest)

Look what we made happen. (Abrams, an African American woman who has been whining about “voter suppression” ever since losing the Georgia governor’s election in 2018, giving fiery speech)

And now, look what they’re trying to do to silence us. (Nothing is shown to indicate anyone is trying to silence or suppress Blacks from voting)

Using every trick in the book (U.S. Postal mailboxes)

And attacking democracy itself. (Jan. 6 attack on U.S. Capitol)

Because they saw what we’re capable of (peaceful BLM march and street being sprayed by police with firehoses; along with a man wearing a “Black Trans Lives Matter” shirt)

And they fear it. (Someone referred to by USA Today as a “white supremacist” carrying a rebel flag)

So this isn’t the time to put your feet up

Or to think posting hashtags and black squares is enough.

Because for us, this was never about one election. (More BLM protest and Black activists)

It’s always been More Than A Vote. (A raised black fist)

It’s a fight that’s just getting started. (A Black man wearing an “I can’t breathe” mask)

And we’ve been ready.

Completely disinterested in fairness, Bumbaca didn't even mention that none of last year’s 570 violent BLM demonstrations in more than 200 locations were featured in the More Than A Vote video.

"Black and Brown voters changed the game in 2020, so in response, lawmakers are trying to change the rules in 2021,” More Than a Vote member and new Atlanta Dream co-owner Renee Montgomery said in a news release. “We know that as athletes and as leaders we have to keep our foot on the gas to protect our power, preserve and expand our voting rights, and to continue turning moments into momentum. More Than a Vote is just getting started."

TNT will take the BLM baton from USA Today Sunday by airing The “You With Us” video during the All-Star Game broadcast from Atlanta.