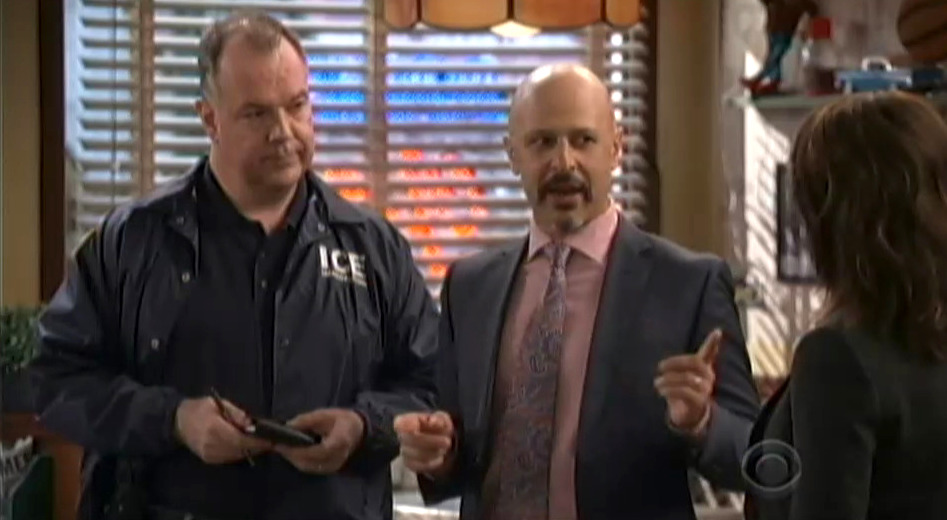 With a title of “The ICEMen Cometh,” the April 30 episode of CBS’s Superior Donuts had no intention of dealing with the issue of illegal immigration and lawful deportation in an honest way. The liberal narrative that ICE agents are arresting innocent people and legal immigrants are unreasonable for expecting everyone to obey the immigration process dominated the story.

Sofia (Diane Guerriero) set the tone right away. She is a legal American citizen, having been born here but her older brother, Rafe (Erik Rivera) is not. He was involved in an immigration raid at the bakery in which he worked in Wisconsin and fled to Chicago to be with his sister. Sofia owns a food truck and gave him a job with her. After Randy (Katey Sagel), a Chicago police officer, tells the gang at Superior Donuts that she is the neighborhood liaison for ICE agents coming to conduct raids, because Chicago is a sanctuary city, she honestly admitted how this puts police officers in the middle of the clash between federal and local law enforcement.

Fawz ( Maz Jobrani), a legal Iraqi immigrant, is painted in the worst way because he believes in upholding the law and going through the legitimate immigration process. He calls ICE agents “true American heroes,” which launches Sofia into her social justice warrior speech about the need for comprehensive immigration reform. Her reasoning, though, includes ICE agents arresting innocent people. She paints illegal immigrants as victims of immigration laws, not of their own actions or their parents.

Fawz: If I could check a box on my tax returns to give all my money to ICE, I would. Actually, I tried. I made my own little box, but they said no.

Franco: Man, how you gonna be pro-ICE and an immigrant?

Fawz: Because they go after the people who came here the wrong way. I came in the right way. I filled out the forms. I-I waited in line.

Sofia: Well, your line is a lot shorter than it is for Colombians. You know, it could take at least a decade just to be eligible.

Fawz: Oh, lucky me. When the Marines blew up my house, they gave me a Big Mac and a green card. I just hate it how liberals expect us to ignore the immigration laws, but we got to follow all the other laws.

Randy: Is your car still parked in that fire lane?

Fawz: Yeah, I'll move it in a sec. The point is that I salute the brave men and women of ICE and their very cool windbreakers.

Sofia: Brave? Some of the people they go after did not choose to break the law. They came here with their parents when they were babies.

Fawz: Okay, well, what if a baby robs a bank? You're telling me that baby shouldn't be punished?

Sofia: You're right. He should go to baby jail.

Fawz: Is that real? Don't mess with me.

Sofia: Nobody would have to break the law if this country had a comprehensive immigration policy.

Arthur: Exactly. Immigration is what made this country great. I mean, we're all from somewhere else, right?

Sweatpants: Ooh, do me! It ends in Chicago, but before that, it's real uncomfortable.

Sofia: This isn't funny to the people who are spending their lives looking over their shoulders, praying that their families don't get torn apart.

In Sofia’s mind, if only America had wide open borders, no one would ever have to worry about being arrested because of immigration laws. She convinces Franco (Jermaine Fowler), a worker in the donut shop to help her hide Rafe until the ICE agents move out of the neighborhood. Shop owner Arthur (Judd Hirsch), who is all about America being a nation of immigrants and even utters the lame trope that “no human being is illegal” is not willing to hide Rafe at his apartment or in his shop because he doesn’t want to break the law. He’s politically correct but still not so far gone that he wants to suffer the consequences of breaking the law.

Franco is trying to win the affections of Sofia so he is happy to break the law for her and hide Rafe. Franco puts him in the donut shop’s basement and lets him run out the basement door to escape. Though Rafe comes back into the shop as the ICE agents are there, the gang is just so clever that they put one over on the ICE agents and Rafe’s cover is not blown. Oh brother.

In the end, Rafe leaves town and goes back to Wisconsin, hires a lawyer and will do the paperwork to become a citizen, Sofia tells her friends. If only Rafe had done that in the first place, he could have avoided all this drama.

This show loves to virtue-shame in its messaging. This episode was largely created by the actress who plays Sofia, Diane Guerrero, who is Colombian-American. Her own family has lived this story, loosely, and she was even hired because of her personal story. Hollywood loves a victim.

Though we didn’t see much of this kind of story during the Obama administration as he ramped up deporting illegal aliens, we've been seeing a lot more of them during President Trump’s time in office.

Superior Donuts joins over a dozen shows that have featured positive, sympathetic illegal immigrant stories, most involving DACA, since only January, including Fox's Star and The Resident, ABC's Grey's Anatomy and For the People, CBS's S.W.A.T. and the normally conservative Blue Bloods, NBC's Blindspot and Superstore, Netflix's One Day at a Time, CW's Dynasty and Jane the Virgin, and Freeform's The Fosters (which has had a running DACA storyline).