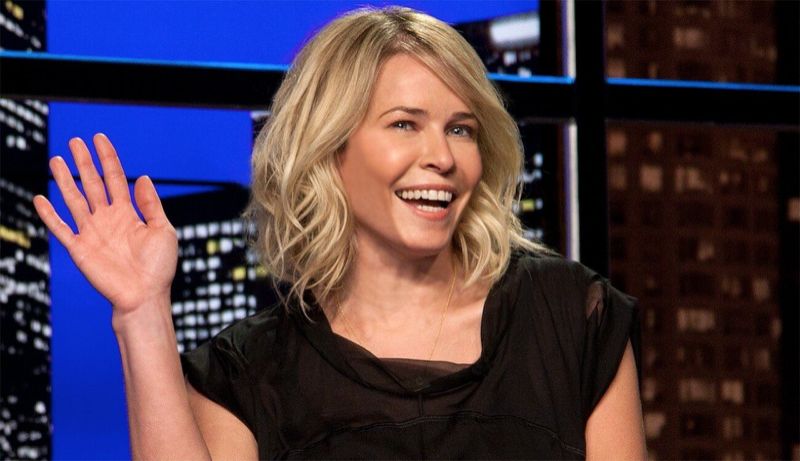 Season Two of Netflix’s Chelsea began on April 14th with the first installation titled “I Had No Backup Plan Whatsoever.” As publicized in earlier interviews, she started the season off with an hour of Trump bashing. She wants to be a “loud voice of opposition” and that is exactly what she is, in a very crude, NSFW way. She even claims President Trump suffers from the effects of contracting syphilis in the 1980s.

After a rather lame opening skit with Adam Sandler – Chelsea wants the viewers to know she’s traveled to India, England, Amsterdam, and Spain since the last season ended – she begins with a monologue that went like this: “Last time I was sitting at this desk, the President of the United States was a hot, young, parasailing novelist named Barack Hussein Obama. And now we have a new president whose name is Donald Putin Trump, who the majority of Americans think is a yuge fucktard. But while everyone else is focusing on the negative, I’m choosing to focus on the few of my favorite things about Team Trump. Welcome to The Bright Side.”

Well, "The Bright Side" included referencing a theory concocted by The New Republic that Trump contracted syphilis in the 1980s. She mocked “this little blonde doozy” Kellyanne Conway like a high school mean girl, and named her new favorite pop star, White House Press Secretary Sean Spicer a.k.a. “Shitty, Shitty, Spice, Spice.” Yeah. That was just the first segment.

Actress Melissa McCarthy and her husband Ben Falcone, along with their friends in the cast of their new show, Nobodies, were the first celebrity guests. McCarthy said it takes the make-up people at Saturday Night Live only fourteen minutes to transform her into White House Press Secretary Sean Spicer. #Sad.

Chelsea’s show inserts fake commercials much like Saturday Night Live, and this show had one promoting the medicine called “Shut the Fuck Up (and Do Something)” for those who are angry but only rant on Facebook about the last election, “Instead of registering to vote, calling your congressman, and giving anything more than zero fucks.” The side effects of this medicine are “Planned Parenthood being fully funded [ironically shown with a photo of a pregnant belly], stricter gun control laws, any gun control laws, universal health care, not the apocalypse, and breathable air.” There is a caution to avoid this medicine if you are a bigot (insert photo of Steve Bannon) or own any white hoods (insert photo of David Duke.) and the drug is not available in the Rust Belt or any Trump-owned properties. No gun control laws? Really? And on breathable air - carbon emission reduction is down to 1994 levels, if she wants to use actual facts in her get out the vote efforts.

Former Obama staffer and current CNN pundit Van Jones followed Chelsea’s lead and trashed Trump, Ivanka and Jared Kusner and Republicans in general. The irony was Jones promoting his new mantra of praising the opposition when it does something he likes. Bashing conservatives one minute, going all kumbaya the next. Jones said, “He (Trump) takes a piss on everybody except Ivanka and Putin. Everyone else is fair game.” Really? I think that big bombing in Afghanistan and in Syria wasn’t exactly a love letter to Putin. Jones said that Susan Rice, Obama’s National Security Adviser, deserves an award for not being a whistleblower and FBI Director Comey deserves scorn for his press conferences. He mocked Jared Kushner as “a dweeb” for wearing a sport coat under his flak vest in Iraq. “No, he’s just riding his little tricycle all around the world, just talking to whoever he wants to” and claimed the biggest problem now is that “no one overseas knows who is in charge now.”

Van Jones crowed about the “anti-Trump resistance,” calling it extraordinary. He gives them credit for how quickly the resistance marches began – the day after the inauguration with the Women’s Marches, for instance. “It took us six years during Bush” to get organized for marches. He calls Trump’s efforts to reform Obamacare as “Trump Don’t Care.” Then the idol worship of Obama peeked through when he said, “The moral genius of Obama was he lost his majority in Congress by trying to get doctors to babies in red states and red counties where the parents were calling him a n**** every day.” Wow, he really said it.

Also, Jones calls Democrats the majority party because he credits the Republican majority in Congress to “gerrymandering and the Electoral College.” See, that moral genius Obama was sacrificing over 1,000 seats over his eight years in office so red state racists could have health care. It was just as obnoxious and out-of-touch as it sounds. Chelsea asked him if he thinks Trump has syphilis. Thankfully, Jones punted.

The actor Matt Walsh who plays White House Press Secretary Mike McLintock on HBO’s Veep was Handler’s last interview. She wanted to learn about the job of press secretary, so naturally she went to an actor who plays one on television for that information. He said he met with Jay Carney, Dee Dee Myers, and Mike McCurry (all Democrats) for background. He called Sean Spicer “Spicy Potato Head” and President Trump “a psychopath.” He agreed with Chelsea that Trump may suffer from the effects of syphilis.

Finally, the show ended with “One Last Nugget” - Chelsea’s suggestions for slogans in support of advertisers who have pulled ads from Fox’s Bill O’Reilly’s show.

Last season, this show was thirty minutes of a hot mess, three times a week. Now it is one hour of a mess once a week. The show has been described as undergoing a “revamp.” Instead of the original renewal of ninety half hour shows, the order has dropped to thirty one hour shows. This reviewer is thankful for small blessings.