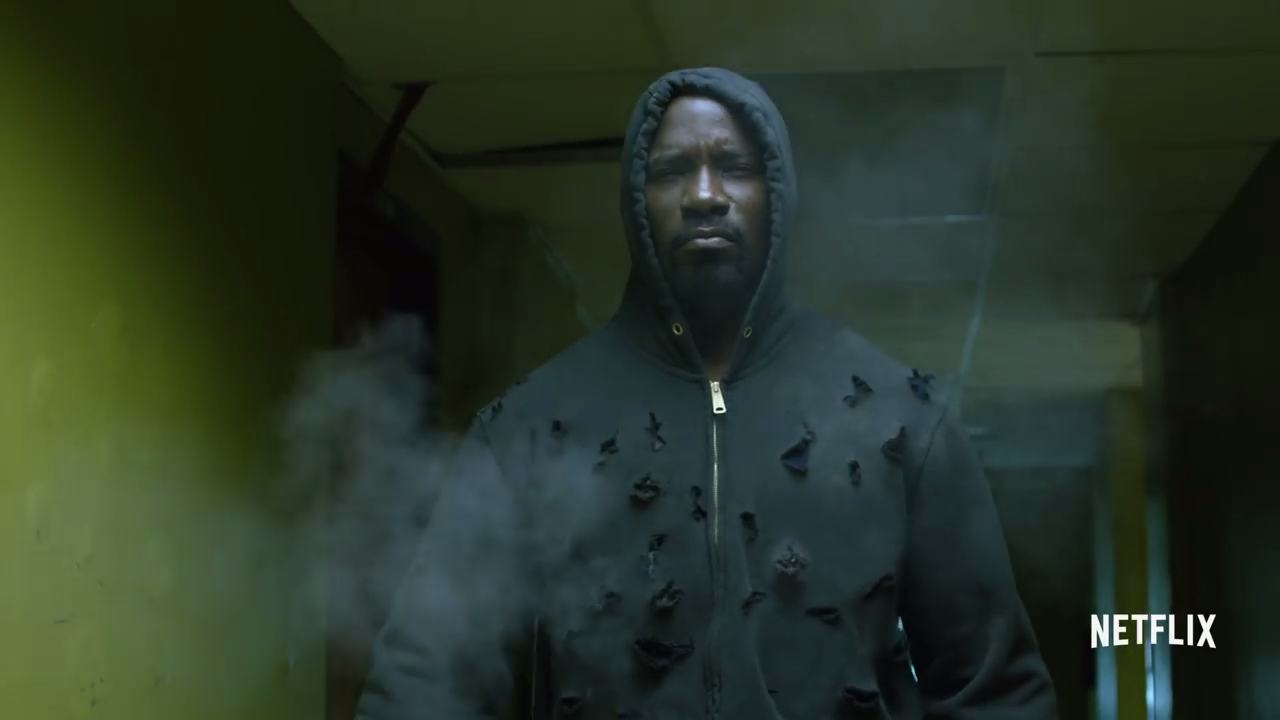 In Netflix’s Original Series Luke Cage, Marvel Televisions and ABC Studios have introduced the first mainstream black superhero who is a hoodie-wearing avenger for social justice in Harlem. The thirteen episode series is peppered with racial issues. The tone is set in the very first episode when a handout to pedestrians reads: “Stay Harlem. Stay Black.” Along the way, biblical quotes are used to justify both good and bad actions, there is gun-running and drugs, and of course corrupt police and politicians are featured in the storyline – a little something for everyone.

Luke Cage (Mike Colter) defends the people of Harlem from bad men and women, including a corrupt city councilwoman who wants to fund a housing project with taxpayer money as her personal legacy. The theme of Black Lives Matter pops up in one scene with the councilwoman during the first episode, titled “Moment of Truth.” The councilwoman is speaking to a reporter and promoting her project as a Harlem Renaissance. Her project is named after Crispus Attucks, the black man who was the first to die in the Boston Massacre. She says, “For black lives to matter, black history and black ownership must also matter.”

Luke is a fugitive from the law. A former law enforcement officer, his real name is Carl Lucas and he escaped from Seagate, a privately run prison in Georgia, after he fell prey to an experiment which resulted in his superhuman strength – his super power. His skin has been hardened to the point that regular bullets bounce off him and only leave bullet holes in his clothing.

In Episode 4, titled “Step in the Arena,” Luke’s story is told and he explains to Reva (Parisa Fitz-Henley), the prison psychologist, that his new name comes from Luke 4:18 “The Spirit of the Lord is on me, because he has anointed me to proclaim good news to the poor. He has sent me to proclaim freedom for the prisoners and recovery of sight for the blind to set the oppressed free.”

The series is decent enough for those who appreciate this genre – lots of action, car chases, and the characters are slowly fleshed out as the series progresses. In the end, there are twists and turns in the plot that keep the viewer interested. The ending is a bit of a surprise, too.

It is a shame that Colter chose to focus on “shaking it up,” as he said in an interview on Chelsea Handler’s show, also on Netflix. He said he is making a political statement by having his character wear a hoodie à la Trayvon Martin.

It is odd that the show publicly chose to concentrate on the detail that the hoodie is not just a fashion statement anymore; it’s a political statement, too. Remember the good old days when a super hero just put on a cape to fight the bad guys, no politics included?