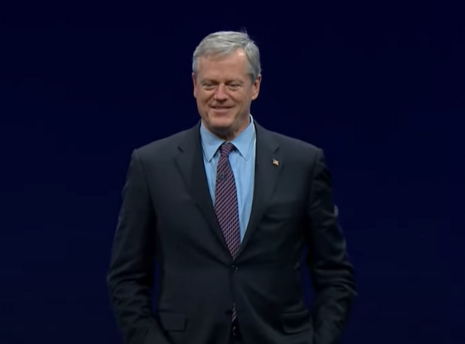 Welcome to your nightmare as the incoming president of the NCAA, Charlie Baker. At the NCAA’s most recent convention, people protested the association’s leniency on allowing males to compete in women’s sports. You’re also bringing along trans baggage from your time as the former governor of Massachusetts. Hope you can handle the heat!

The NCAA convention in San Antonio ended three days ago, but not without boiling controversy. Demonstrators blasted the NCAA for allowing men, like Penn U. swimmer Will “Lia” Thomas, to compete in and destroy the competitive balance in collegiate women's sports. They gathered 10,000 petition signatures against this nonsense.

The Independent Council on Women’s Sports (ICONS), organizer of the protest, said:

They [the NCAA] must protect female athletes from discrimination on the basis of sex, or expect we will be forced to take legal steps to compel them to do so.

Christiana Kiefer, an attorney with what CNN calls an anti-LGBT group, Alliance Defending Freedom, tweeted a blunt message to the NCAA. “we’re talking to you. It’s time to stop discriminating against female athletes and protect #womenssports!”

Baker, the former governor of Massachusetts who sided with the alphabet mob on trans legislation, is wading into this maelstrom when he assumes the role of NCAA president in two months.

The Boston Herald said Baker “will be earning every penny of his estimated $3 million salary over this one. The former Republican governor may find himself pining for the good old days when all he had to deal with was COVID and mask mandates.”

In 2016, then Gov. Baker angered his GOP constituents by signing a bathroom bill opening public female bathrooms and locker rooms to males. (Which had to merit points with the NCAA search committee!). What he said then is a clear tip-off of how he’ll likely kneel and bow to the LGBTABCD crowd as NCAA chief.:

I’ve said many times over the course of this debate for the last 18 months that no one should be discriminated against in Massachusetts because of their gender identity. I believe this compromise legislation extends additional protections to the commonwealth’s transgender community and includes provisions to address the public safety concerns that were expressed by some, by requiring the attorney general to issue regulations to protect against people abusing the law.

Bottom line? Lia Thomas wannabes, elbow the women aside and walk right into their locker rooms and have a go at ill-gotten national fame and glory. The NCAA appears primed to maintain the status quo – making a mockery of women’s athletics.