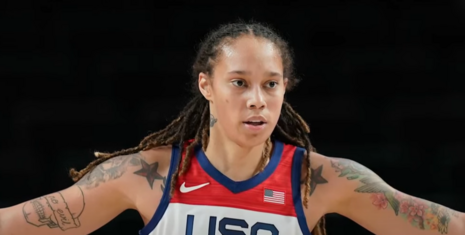 The legend of Brittney Griner grows. Now she’s “the face of global unrest” and Arizonan of the Year, according to the left-stream Phoenix newspaper, The Arizona Republic. That award went to the late, great American hero Pat Tillman in 2004, but the standards for this honor have weakened substantially since then.

“Today we name Brittney Griner ‘Arizonan of the Year’ because no other Arizona newsmaker in 2022 captured the public eye as intensely as she did,” wrote the Arizona Republic’s editorial board. “Nor has anyone’s story in this state aroused the kind of fear and foreboding that hers had for nearly 300 days.”

She broke the law on foreign soil. She was in the public eye only because of her modest fame -- and perhaps because she checked lefty identity boxes.

The Republic realized the award would be questioned by many and went into damage control almost as soon as it announced the decision that does dishonor to the many people doing noteworthy things in the Grand Canyon State.:

Many have argued that Griner had no one to blame but herself for her predicament – that she broke Russian law and now would pay the consequences.

Those people fail to understand the essential nature of Vladimir Putin and the Russian justice system.

The Republic tried to shift blame from Griner for her carelessness because she became a victim of hostage taking by the “mafia don” President Putin. Thanks, but one can recognize the evil of the Putin regime and even the injustice of a 9-year prison sentence for pot possession without lionizing Griner. She’s also a hero of the Black Lives Matter movement that shook down corporate America and professional sports two years ago, ruining the sports experience for untold numbers of Americans:

Some conservatives remembered that Griner had called on her own Phoenix Mercury team in 2020 to stop playing the national anthem. We would remind those critics that she did that during a cultural awakening in which African Americans were drawing attention not only to the modern mistreatment of their people but the atrocities committed over centuries against them.

Spare the lecturing! Griner was just another lemming following the crowd.

Arizona criminal of the year would have been a more appropriate “honor” for the woman for whom President Joe Biden gave up the Merchant of Death – Viktor Bout – in a late-year prisoner swap.

How about cannabis smuggler of the year? This one applies, too.

The Republic’s poor choice of Arizonan of the Year is a thinly veiled attempt to re-write history and resurrect the reputations of Griner and President Biden. He let the Russians keep a real hero, Marine Paul Whelan, locked up so that a woke athlete could play basketball.

Griner isn’t anywhere near the heroic stuff of Pat Tillman, and it’s true that she hasn’t asked for awards like this one. Her story is another example of media idiocy in the U.S. Tillman was a true American hero, and he must be turning over in his grave regarding The Republic’s farce.