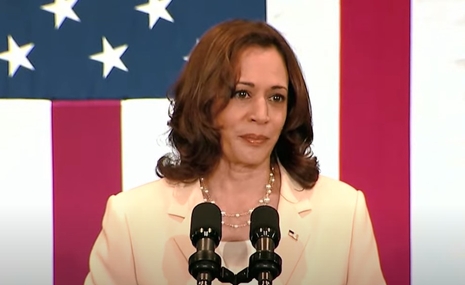 Vice-president and world class hypocrite Kamala Harris is in full virtue signal mode with her condemnation of Russia for sentencing WNBA all-star Brittney Griner to nine-plus years of prison for drug possession.

As the district attorney for San Francisco, Harris was the bane of marijuana users. She jailed 1,900 of them. Now all of a sudden, with her higher profile as VP, Harris has done a 180 with her opposition to a black, lesbian basketball player’s cannabis conviction. If it weren’t for double standards, leftists like Harris would have no standards at all.

Arrested in Moscow last February and detained in a Russian jail since then, Griner received her sentence on Thursday. She was busted for attempting to board a plane with cannabis vape cartridges in her carry-on bag. Griner, who plays for the WNBA’s Phoenix Mercury and for a team in Russia, has been the frequent subject of prisoner trade negotiations between the U.S. and Russia. She has nine days to appeal the sentencing.

Harris denounced the sentencing on her Twitter account: “With today's sentencing, Russia continues its wrongful detention of Brittney Griner. Sher should be released immediately.” The VP also said she and President Joe Biden “are working every day to reunite Brittney, as well as Paul Whelan, with loved ones who miss each of them dearly.”

Twitter commenters quickly jumped all over the vice-president for her blatant hypocrisy. The Mercury News confirmed that former San Francisco DA Harris oversaw more than 1,900 marijuana convictions. Her office also convicted people on marijuana charges at a higher rate than her predecessor. A 2019 investigation by the Washington Free Beacon resulted in the finding that from 2011-2016, California Attorney General Harris sent 1,560 marijuana users to the state pen.

Harris opposed a state proposition to legalize marijuana in 2010. In fact, she co-wrote an opposition argument in a state voter guide. Also as AG, Harris authorized aerial searches for marijuana fields and raids without warrants.

The Biden Administration has taken the position that Griner is being wrongfully detained, but she shattered that narrative with her plea of guilty.

Terri Carmichael Jackson, executive director of the WBNA players’ union, said, “Today's verdict and sentence, while inevitable, is disappointing. The unjust decision today is what it is, unjust. It is a terrible blow.”

Former Preside t Donald Trump said of Griner, “She went in there loaded up with drugs, into a hostile territory and they are very vigilant with drugs. … And now we're supposed to get her out for an absolute killer? One of the biggest arms dealers in the world. Killed many people, many Americans, and he's going to get a free card and we're going to get her out.”

That’s exactly what VP Harris and her boss want, because now she’s enlightened about marijuana users. Especially if they can attract black, lesbian voters.