Watson’s Smutty Legacy Grows; Texans Settle With 30 Of His Accusers 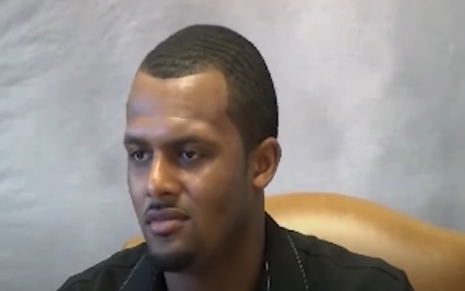 Quarterback Deshaun Watson is already gone, traded to Cleveland, but his old team is still trying to clean up the horrible mess created by this alleged pervert. The Houston Texans have settled with 30 women who claimed accused Watson of sexual misconduct. It’s another sad chapter in the deepening record of criminal behavior by NFL players.

Watson played for the Texans for four seasons, then sat out last year because of all the allegations made against him by massage therapists. This year, he and his baggage were traded to Cleveland. He recently settled out of court with 20 of his accusers.

One of the women who settled with Houston had sued the team in June, alleging knowledge of the athlete’s misconduct. Her suit said the Texans turned a “blind eye” to the scandal and were "aware of Watson’s alleged behavior during message therapy sessions and the individuals within the Texas organization knew or should have known of Watson’s conduct."

Tony Buzbee, the attorney for the 30 women in the latest settlement, said:

Today all of the women who have made, or intended to make, claims against the Houston Texans organization have resolved their claims. The terms of the settlements, to include the amounts paid each, are confidential. I will have no further comment on the allegations or the Texans’ alleged role, other than to say that there is a marked contrast in the way in which the Texans addressed these allegations, and the way in which Watson’s team has done so. As has been previously reported, only one of the thirty women who made allegations against the Texans filed a formal lawsuit. That particular lawsuit will be dismissed with prejudice as soon as the appropriate settlement paperwork is complete.

Buzbee’s full statement appears on this Twitter link. Additionally, he said it took a great deal of fortitude for his clients to come forward against a “wrongdoer” who is rich, powerful and famous. He hopes their bravery will inspire others who have been the victims of sexual abuse.

The New York Times previously reported that the Texans had arranged for Watson’s membership to a private club where some of the alleged sexual abuse took place.

Janice, Hannah, and Cal McNair, owners of the Texans, were “shocked and deeply saddened” when they found out so many women were alleging sexual misconduct against Watson. They said:

Although our organization did not have any knowledge of Deshaun Watson’s alleged misconduct, we have intentionally chosen to resolve this matter amicably. This is not an admission of any wrongdoing, but instead a clear stand against any form of sexual assault and misconduct.

So the Texans and Watson paid women to just go away. Their personal stories don’t acquit him by any means.

In fact, Watson’s legal mess is far from over. A retired federal judge who presided over a hearing on charges against Watson, Sue L. Robinson, is expected to issue a decision soon as to potential punishment under the NFL’s Personal Conduct Policy.

The NFL, which has its hands full of wayward players logging criminal records, has been watching the legal process play out and has not punished Watson. It’s been widely speculated that he will eventually receive a suspension of some unknown length of time.
The sordid sagas of Watson and the growing list of arrested players ought to make the league that boasts football is “gay, lesbian, queer and transgender” add “criminal” to that list.