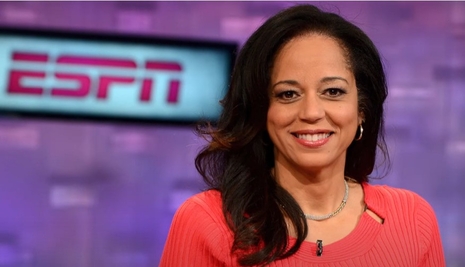 The silence of woke ESPN women’s college basketball broadcasters was golden, but they ruined it by also spouting off against the Florida education bill. ESPN’s weekend broadcasts of the NCAA women’s basketball tournament were marred by triggered announcers’ inaccurate portrayal of the Florida bill aimed at protecting students from sexual indoctrination. This is the bill that lying lefties are calling the “don’t say gay bill.”

Unfortunately, the woke ESPN broadcasters went off the deep end about LGBT rights prior to refusing to call the games for brief periods of play. Woke ESPN personalities were showing their support for the LGBT agenda and opposition to Florida House Bill 1557.

The political posturing began at the start of the second half of Friday’s South Carolina-Howard women’s game. Broadcasters Carolyn Peck (seen in photo) and Courtney Lyle went off the rails by labeling the Parental Rights in Education bill “a threat to human rights.” After spewing boiler-plate, left-wing narratives, they went silent for two minutes.

“Normally at this time we would take a look back at the first half, but there are things bigger than basketball that need to be addressed at this time. Our friends, our family, our co-workers, the players and coaches in our community are hurting right now. And at 3 o'clock, about eight minutes ago, our LGBTQIA+ teammates at Disney asked for our solidarity and support, including our company's support, in opposition to the Parental Rights in Education bill in the state of Florida and similar legislation across the United States."

"And a threat to any human rights is a threat to all human rights. At this time, Courtney and I, we're going to take a pause from our broadcast to show our love and support for our friends, our families and our colleagues."

On Saturday, during the Florida vs. Central Florida game, Pam Ward and Stephanie White strayed from their lane into politics with a silent protest of the Florida bill.

If only these activist broadcasters had gone exclusively with the silence, these basketball games might have been watchable. ESPN was merely reinforcing its reputation as the network of all things left and woke.

ESPN is owned by Disney, and the parent company’s employees were also incensed over the Florida parents’ bill. LGBTQABCDE&F employees at Disney and their supporters blew gaskets because the company did not launch stronger attacks on Florida lawmakers.

Chapek groveled before his employees, saying he was “sorry” he didn’t more strongly oppose the bill from the beginning.:

“It is clear that this is not just an issue about a bill in Florida, but instead yet another challenge to basic human rights. You needed me to be a stronger ally in the fight for equal rights and I let you down. I am sorry.”

Despite the left’s lies about the bill, it actually protects children 10 and under from exposure to school indoctrination. Parents must be notified of sex education being geared for these youngsters. The word “gay” is not mentioned in the bill, but those on the Left need to lie in order to poison people against the legislation.