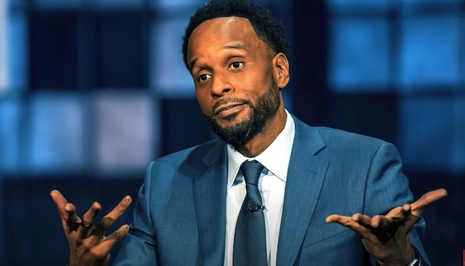 Former ESPN TV and radio personality Bomani Jones continues to fail upwards as his move from ESPN to HBO indicates. Nobody watches Jones, nobody listens to the radical leftist, and his terrible ratings bear that out. No matter what network he’s on or what time slot he’s in, Jones is a bona fide audience killer.

Jones made his HBO debut Sunday, the ratings are in now and it was a disaster. His weekly program, Game Theory with Bomani Jones, attracted a pitiful 153,000 viewers. Hoping to keep the audience of Last Week Tonight With John Oliver, which had 664,000 viewers, HBO slotted Jones’ program right after Oliver’s.

That strategy failed right out of the starting gate with Jones, who lost 511,000 of the Oliver viewers – 77 percent!

Outkick blogger Bobby Burack’s observation was the ultimate insult: “It’s almost impressive to lose that many of your lead-in’s viewers and then add virtually none of your own. HBO could have drawn a higher total by airing infomercials or going dark.”

Bomani Jones has been on a downward slide for a long time. At ESPN, his radio program The Right Time With Bomani Jones was cancelled in 2017 after losing 90 affiliates and recording the lowest ratings in ESPN Radio history.

Oddly, ESPN rewarded Jones with a $2 million contract to appear on a new TV show with Pablo Torre called High Noon. That program followed the highly watched Stephen A. Smith and still lost 50 percent of Smith’s audience. ESPN moved High Noon to a different time slot with the same old results. That experiment fizzled as well.

Frequently failing to rank among cable TV’s top-rated 150 programs, High Noon bit the dust in 2020. Jones blamed the failure on Torre, saying, “We did not have chemistry between me and Pablo.” Burack reported that quote was pitched to GQ by Jones’ agent.

“I just don’t know why people try to make this far more complex than it is. What’s the problem? White people.

Burack asserts white media executives are afraid of getting accused of racism if they dump Jones, and this enables him to profit as a high-paid race grifter. The white executives may have also been intimidated into keeping Jones after The Washington Post praised him as someone who “thrives where race and sports collide.”

Jones, meanwhile, is in denial about his inability to attract an audience. He’s not the problem, he says, it’s the conservative news media. In an interview five days ago, he accused conservative news people of trying to fabricate controversy over his “stuff” and failing in those attempts.

If anyone knows failure, it’s “Wrong Time Jones,” who better up his HBO game before it becomes yet another of his many failures.