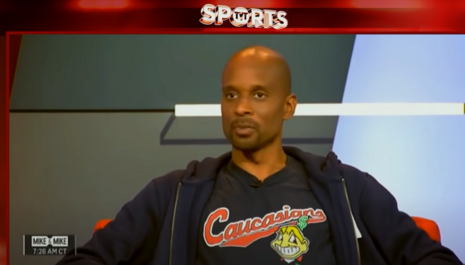 How do you really feel about Brian Flores’ lawsuit against the NFL and three of its teams, Bomani Jones? After the Miami Dolphins recently fired Flores, their former coach filed a lawsuit against them, Denver, the New York Giants and the NFL. He alleged Miami owner Stephen Ross wanted to pay him $100,000 per loss and tank the 2020 season, and that the Broncos and Giants plans to interview him were Rooney Rule shams. On Thursday, ESPN and HBO talk show host Jones used the occasion of this lawsuit to launch a race-laden attack on “white people.”

Jones made his incendiary comments earlier this week on the Dan “liberal” Le Batard radio show with Stugotz. Le Batard, who swings from the far Left side of the plate, asked Jones why NFL teams conduct supposedly token interviews with minority coaching candidates in order to appear to honor that Rooney Rule requirement. Jones’ response didn’t exactly improve race relations:

“I just don’t know why people try to make this far more complex than it is. What’s the problem? White people.

Jones backtracked somewhat by saying not every single white person is contributing to racism in NFL hiring decisions. But after his opening tirade, that’s like saying not every husband is a wife-beater. Then he reversed course and accused anonymous people for racism in the NFL.

So, white people are guilty of racism by association with … white people? Pretty much, alleges Bomani Jones, seen above in a previous interview and wearing a "Caucasians" sweatshirt..

Since the big news of Flores’ lawsuit broke a few days ago, plenty of people have refuted his explosive charges of racism, tanking and another charge against the Dolphins for tampering in hopes of landing former free agent and now retired quarterback Tom Brady.

The NFL said Flores’ lawsuit is without merit. The Denver Broncos said they conducted a completely honest and fair interview with him and his accusation against them is “blatantly false.” Flores accused John Elway, Denver’s president of football operations, of showing up late and drunk for his interview. However, Elway said, “For Brian to make an assumption about my appearance and state of mind early that morning was subjective, hurtful and just plain wrong,” Elway said. He added that his disheveled appearance “was because we had just flown in during the middle of the night and were going on a few hours of sleep to meet the only window provided to us.”

On his Fearless broadcast, (the black) Jason Whitlock called Flores is a “useful idiot with racial hang-ups.”

The Giants said Flores was “irresponsible” for basing his condemnation of the team on a text message from New England coach Bill Belichick mistaking him as the man hired by New York. It was actually Brian Daboll.

Hue Jackson, the black former head coach at Cleveland and now at Grambling State University, lent support for Flores for risking his career in hopes of increasing black hirings. Washington’s Latin coach Ron Rivera said he feels for Flores, and former Cincinnati coach Marvin Lewis, who is also black, said he believed some of his interviews for head coaching positions were shams based on satisfying the Rooney Rule.

Jones saw it as an opportunity to attack the white race in a most irresponsible manner. Outkick’s Clay Travis tweeted: “This kind of casual racism is totally accepted in sports media. If any other race is mentioned in the same manner however, it’s career ending.” Outkick attempted to contact ESPN for a response to Jones’ racial outburst, but did not receive a reply.