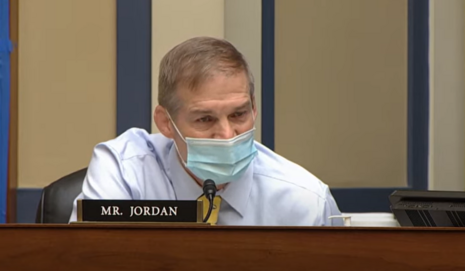 GOP members of Congress on Thursday confirmed fast-shrinking Republican approval of Major League Baseball. They sent MLB Commissioner Rob Manfred a letter demanding documents about its politically motivated decision to remove the 2021 All-Star Game from Atlanta and information about its antitrust exemption.

As you may recall, the All-Star Game was moved from Atlanta to Denver over Democrat allegations that a recently passed Georgia election integrity law is racist and will result in voter suppression.

MLB’s decision to insert itself in Georgia’s election laws was based on inaccurate and politicized information. Although Democrats and some woke corporate elites like to claim that the new Georgia law constitutes “Jim Crow 2.0” and “voter suppression,” these claims are false and unfounded. In fact, the law enhances access to voting and many of the new provisions “are popular even among Black voters. An Atlanta Journal-Constitution poll found that 74 percent of Georgians support voter ID requirements, including 63 percent of African American respondents.”

Additionally, the congressmen asked Manfred to provide documents and information about Major League Baseball using “its immense market power and resources to influence the official actions of the elected representatives of Georgia.”

MLB enjoys “special and unique antitrust immunities that have allowed it to become America’s only nationwide professional baseball league,” the letter said. These amount to “attempted economic extortion that has harmed small businesses in and around Atlanta.”

The GOP trio also pinned down Manfred on the fact that MLB has not expressed any similar concerns about election laws in Colorado and New York, which have more voting restrictions than Georgia.

This verbal pitch aimed right for MLB’s head: “MLB’s opposition to voter integrity measures in Georgia is also unabashedly hypocritical in light of MLB’s close partnerships with communist regimes in China and Cuba—two countries that suppress free and fair elections.”

In 2017, baseball announced a 10-year partnership with a Chinese government enterprise to popularize baseball in the communist nation. A senior MLB official crowed then about the league being “honored to team up with one of China’s more forward-thinking, innovative and successful companies.”

Major League Baseball also works closely with Cuba’s dictatorship to keep the pipeline of its players flowing to the U.S.

The full letter from the congressmen to Manfred appears here.

Baseball has egg on its face because it allowed President Joe Biden, Democrats, corporations and media to push Manfred into the All-Star Game blunder. None of them care about the sport’s ties with brutal communist regimes as much as Georgia’s voting law because it’s a crucial swing state in elections and radioactive politically.

Now the commissioner is figuratively wiping dirt off the seat of his pants after the congressional brushback pitch knocked him down. Hopefully, the recent turn of events pushing conservatives away from baseball knocked some sense into the commissioner about taking partisan political sides.